The people of Lac-Mégantic cannot yet grasp the enormity of the train disaster that wiped out their town centre this weekend. There is growing disbelief: how could a runaway train careen into their town to cause such deadly devastation?

By Frank Kuin in Lac-Mégantic

Standing a few hundreds of meters away, Paul Charrier is watching the smouldering fires in the old centre of his hometown, Lac-Mégantic, Quebec. Firefighters are working with heavy equipment to extinguish the flames in the charred ruins of historic buildings on Rue Frontenac, the old main street of the village. Derailed and mangled tanker cars are sitting askew on a level rain crossing.

“Normally, we would be looking at the buildings along Rue Frontenac from here,” says Charrier, a man of about 30, pointing to a slight bend in the road where the entertainment district began. “It was a beautiful spot.” Now, there is a large void. About 30 buildings were destroyed when a freight train carrying crude oil derailed there and exploded in the early hours of Saturday. A massive blaze engulfed the buildings within minutes, including the Musi-Café, a popular bar in this town of 6,000 people.

Charrier was at Musi-Café that night with five friends. They had a table on the terrace in front, a few meters away from the level crossing. At close to 1 a.m., about 20 minutes before the disaster, he left, he recounts in French. He was walking home when he heard a loud bang. “Suddenly, there was a lot of light, as if it was day,” he says. “I turned around and saw a huge mushroom behind me, a big fireball.”

There was no going back, he says. “It was very hot.” It was immediately clear that his friends had little chance of survival. “I’ve tried to call them, but I have not heard from them,” he says with a nervous grin. “I don’t think I’ll hear from them again.” He seems to be in shock.

“I don’t think I’ll hear from them again”

Lac-Mégantic, a picturesque town near the border with the U.S. state of Maine, cannot yet grasp the enormity of the train disaster that ripped out its heart this weekend. Days after that night’s destruction, disbelief is growing: how could a runaway train careen into town and wreak such deadly havoc? 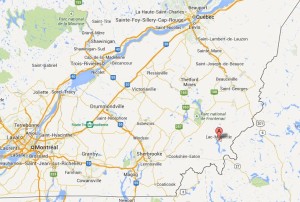 The train with 72 tanker cars was on its way from Quebec to Maine. According to the operator, railway company Montreal, Maine & Atlantic Railway, the train had stopped about 12 kilometers from Lac-Mégantic for a shift change, near the village of Nantes. A fire broke out in the locomotive, which was extinguished around midnight. Power was cut off, causing the hydraulic brakes to be gradually released. The unmanned train rolled downhill towards Lac-Mégantic, at growing speed.

The railway company yesterday blamed firefighters at Nantes for turning off the brakes. But according to the fire department, the locomotive was left with an employee of the company after the fire had been extinguished.

The disaster has drawn attention to the growing transportation of crude oil by train in North America, a largely unnoticed trend. In recent years, oil transport by rail has increased significantly because of growing oil production and lack of pipeline capacity. The two largest Canadian railway companies, Canadian National and Canadian Pacific, carried more than 83,000 tanker cars of oil last year, up from 18,000 in 2011. Smaller railway companies have a new lease on life because of transport of oil from the shale formations of North Dakota and the Alberta tar sands.

Pipelines for crude oil are controversial; nobody wants them in their back yard for fear of oil spills and pollution. The scale of the disaster in Lac-Mégantic can turn the tide in favour of pipelines, observers believe. “I believe it’s much safer to carry the product by pipeline,” Jean-Paul Lacoursière, professor at the University of Sherbrooke, near Lac-Mégantic, told the Canadian Press. “But you need a good pipeline and a good company. A good pipeline is certainly safer than a train.” 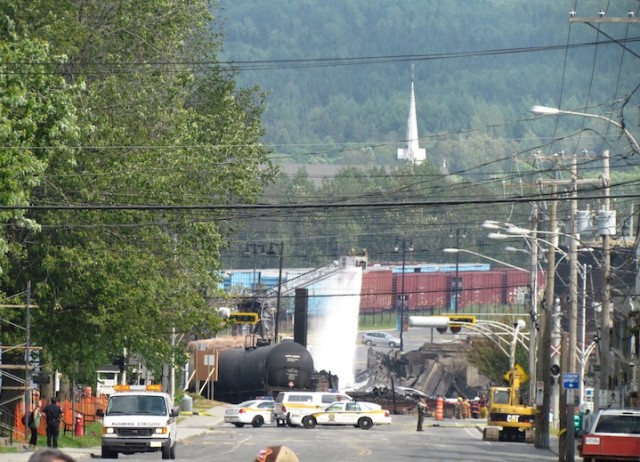 The disaster area in Lac-Mégantic has been cordoned off by police.

In Lac-Mégantic, it is becoming clearer by the day just how dangerous the use of oil trains is. The bodies of 13 victims have now been recovered, nearly 40 people are still missing. Most of them were last seen at the Musi-Café. Others lived in apartments above the stores on the main street.

Many residents of Lac-Mégantic know someone who is missing. Gaétane Boutin, who fled her apartment in the disaster zone with her husband, is missing a niece. Marc Fortier, who also lives in the disaster area, says the mother of a school friend of his son is gone. There are also people who were babysitting young children on Friday night, but have not heard from the parents since then, says an aid worker.

“How is it possible that a train starts driving by itself?”

Boutin and Fortier are among 2,000 people who cannot return to their homes in the disaster zone after they fled during the night. Some are staying with family or friends, others in a temporary shelter at the local school. Fortier saw burning oil flow down the streets as he fled his house Saturday night. “It was a river of fire,” he says. A portion of the oil from the train has flowed into Lake Mégantic.

None of them had ever thought that the railway line that crosses the town could pose such a huge threat, they say. “The town is built around the track,” says Boutin, who has lived in the region since her youth. “The track runs right by our apartment, but I’ve never had problems with it.” Like everyone else, she has heard that the train was going way too fast, and that there was no conductor on board. “How is it possible that a train starts driving by itself? We’ll have to wait for the results of the investigation.”

One Response to Runaway train strikes at heart of Lac-Mégantic