The train disaster in Lac-Mégantic has exposed a creeping trend in North America: an exponential increase in the transport of crude oil by rail. Railway companies like the booming business, but critics say the risks of the oil trains are too big.

Long, dark freight trains began to appear on the old railway tracks in Fairfield, Maine over a year ago. Read Brugger, an environmentally conscious citizen in the area, looked into the sudden increase in tanker traffic, and his suspicions were confirmed: Maine had become a transit area of crude oil from the shale fields of North Dakota.

With a group of other concerned citizens, Brugger organized a demonstration against the transit of the non-conventional oil to a refinery in neighbouring New Brunswick, on Canada’s East Coast. The protesters objected to the large-scale fracking operations to extract shale oil which are responsible for a boom in U.S. production of fossil fuels. They also expressed their concerns about the transportation of combustible material through their community. “Our worst nightmare was a disaster spill,” he says.

The demonstrators in Maine had no idea of the scale of the catastrophe that would strike  the Canadian town of Lac-Mégantic, Quebec across the border, just a week later. A freight train with 72 tankers of oil derailed on July 6 and exploded in the old town centre. About 30 buildings were destroyed by the blast and ensuing inferno, killing 47 people. The train, carrying crude from the shale fields, was on its way to New Brunswick via Maine.

“We had gone out there thinking that we were going to bring awareness about a potential environmental disaster, not one that dealt with massive loss of human life,” says Brugger. “But now we are more determined than ever to stop the shipments across Maine.”

The train disaster in Lac-Mégantic exposed a creeping trend in North America: an exponential increase in the transportation of crude oil by rail. Due to the tremendous growth of oil production in Canada and the United States, in areas such as the Alberta oil sands and the shale reserves in North Dakota, and a lack of pipeline capacity, oil companies are increasingly turning to railways to take their crude oil to refineries. Oil from the Bakken formation in the heartland of America, especially, has been fanning across the continent in rolling stock.

Production of Bakken oil by the controversial ‘fracking’ method has increased five-fold in the past five years, to 790,000 barrels per day. North Dakota has grown rapidly into the second-largest oil producing state in the U.S., but it has limited access to pipelines. As a result, two-thirds of the oil leaves the state by rail. Trains made up of dozens of tanker cars, up to a mile long, are filled continuously in circular loading depots.

“There’s a spider web of rail lines all over North Dakota to transport oil in all directions,” says Wayde Shafer of the environmental group Sierra Club in Bismarck, North Dakota. Refineries on the U.S. and Canadian coasts, often dependent on imports of crude oil by ship, are eager for oil from a domestic source. States from New York and Pennsylvania to Louisiana and Washington are investing in terminals to attract oil from the Bakken formation. 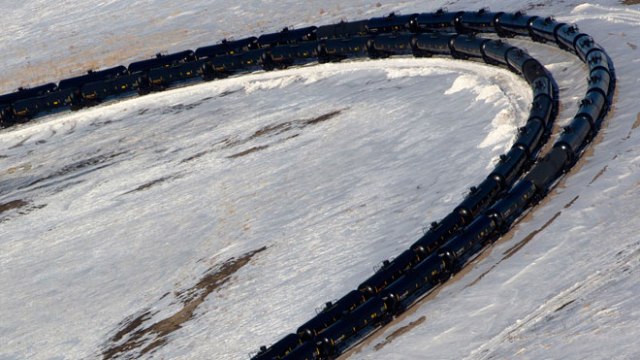 Oil train at a depot in North Dakota.

Transport of oil by rail has advantages for oil producers, especially flexibility. Unlike pipelines, which run to fixed destinations such as the oil storage hub in Cushing, Oklahoma, trains can go anywhere. This enables suppliers to choose the buyer who pays the highest price – a price that is often significantly higher than what they get when they send their oil to Cushing.

Railway companies also benefit. They have suffered falling revenues for years because of the declining transport of coal, as power plants have switched to cheaper natural gas. The oil boom has become the main source of growth for companies such as the Montreal, Maine & Atlantic Railway, the owner of the train that derailed in Canada.

But as became painfully clear in Lac-Mégantic, the transport of oil by rail also has some major drawbacks. Unlike pipelines, which are generally routed around large population centres, railways typically run right through them. Many cities and towns have been built around railways in the 19th Century. The oil trains now run through those places.

In addition, the railways are often old and not suited for heavy transport of hazardous materials. In North Dakota, railways were built in the 19th Century to transport grain. Those rails are now bearing heavy burdens. Moreover, tanker cars such as the ones used by railway companies like MM&A are actually too light for the transport of crude oil as they break open relatively easily upon impact. Because of deregulation, however, companies can do as they see fit.

Critics are calling for new rules, stricter oversight, and tougher safety inspections of railroads and trains. “After the Exxon Valdez accident, they started using double-hulled ships,” says Schafer, referring to the oil tanker spill in Alaska in 1989. “Perhaps we need double-hulled tanker cars on rail lines so that they don’t puncture and explode so easily.”

Proponents of pipelines see the Lac-Mégantic disaster as an argument for more pipelines, such as the controversial Keystone XL, a proposed connection between Alberta and Texas. That project has been postponed for years because of the concerns of opponents along the route about a possible oil spill, as well as general opposition to the Canadian tar sands.

“Pipelines are the safest way of transporting oil and natural gas, and we need more of them, without delay,” wrote Diana Furchtgott-Roth of the Manhattan Institute in an op-ed article in the newspaper The Globe and Mail.

But according to Schafer, that is a false choice. “Pipelines leak and cause environmental problems, while trains are a threat to the communities they pass through,” he says. “Instead of relying on fossil fuels so heavily, we should be developing renewable energy sources that don’t have these dangers and the pollution associated with them.”

Whether that will happen soon enough remains to be seen, but it is certain that the disaster in Lac-Mégantic has started a debate over the transportation of oil by rail. In Washington state, a decision about construction on the West Coast of a train terminal for shale oil from North Dakota with a capacity of 380,000 barrels per day has been postponed in response to the accident. “I don’t want to hurry this,” said one of the commissioners from the Port of Vancouver, Washington.

On the other side of the continent, in Maine, Read Brugger plans to mobilize more people against the oil trains. “They’ve proven to be unsafe, and what we need to do is stop them,” he says. “It’s such a tragic accident, the best way we can deal with it is to make sure it never happens again.”

Runaway train strikes at heart of Lac-Mégantic ‘The Cosmos are back’, now without Pelé
Share