At the initiative of Prime Minister Justin Trudeau, Canada is flying in 25,000 Syrian refugees from camps in Lebanon and Jordan. Volunteers are offering shelter and knitting tuques. “It is a very nice step, a question of humanity.”

With a bunch of flowers, Nicolas Altawil and his two daughters are waiting in front of a temporary welcome centre for Syrian refugees near the airport of Montreal. It’s late in the evening, and a Canadian government plane from Lebanon has just landed with 161 refugees on board, including Altawil’s brother-in-law and his young family. 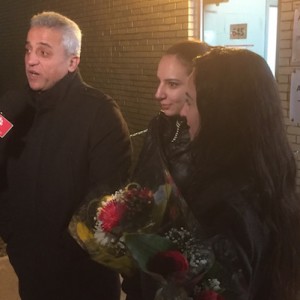 “They have lost everything and left everything behind in Damascus, they are looking for security,” says Altawil, who immigrated to Canada 21 years ago from the Syrian capital. “They have survived bombings and fled to Lebanon. We will welcome them and tell them that they are at home here.”

Altawil’s relatives are among the first Syrian refugees who have been brought to Canada as part of an ambitious plan by the new Canadian government to bring in 25,000 refugees within three months. The plan, announced by Prime Minister Justin Trudeau after his inauguration, is one of the top priorities of his cabinet, after a promise during the election campaign.

Trudeau made that promise in early September in response to the photo of Alan Kurdi, the Syrian boy who washed up dead in Turkey after a boat carrying refugees had capsized in the Mediterranean Sea. It turned out Kurdi had Canadian relatives, who had attempted to sponsor some family members to come to Canada – but an application had been rejected by the Canadian government. Canadians were shocked by those revelations.

“We get to show what Canada is all about”

According to Trudeau, who is riding a wave of popularity in Canada and abroad following his resounding election victory in October, the initiative is an opportunity for the country to show its best side on the world stage, after 10 years of Conservative rule. His predecessor, Stephen Harper, regularly rejected refugees as “bogus”, people who tried to jump the line for the regular immigration stream.

“This is a wonderful night where we get to show what Canada is all about,” Trudeau said in mid-December at the arrival ceremony for the first plane with refugees in Toronto. The 44-year-old Prime Minister handed a family with a small daughter a pink jacket for the Canadian winter. A photograph of that moment was seen all over the world. “Not just to a planeload of new Canadians, but we get to show the world how to open our hearts and welcome people who are fleeing extraordinarily difficult straits.” 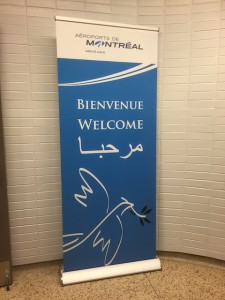 Welcome sign for Syrian refugees at the airport in Montreal

In the past six weeks, the Canadian government has drawn up an infrastructure to manage the arrival of 25,000 refugees. The costs of the operation are estimated at nearly $880 million (Canadian).

An initial target to bring the full number to Canada by the end of this year proved too ambitious; now the goal is to get them into the country by March 1, 2016 (2,000 are already in Canada). Following the attacks in Paris, there were calls not to rush the selection and inspection process, which normally can take months or even years.

Canada selects refugees from among Syrians who are registered with the United Nations High Commission for Refugees (UNHCR) in Lebanon and Jordan. To make the selection, about 500 employees of Canada’s Border Agency and military personnel have been sent to camps in those countries. They inspect identity papers of candidates, to rule out as much as possible that there are ISIS infiltrators among them. The refugees undergo a medical examination and supply biometric data, such as iris scans. They are also interviewed. Selection criteria focus on ‘safe’ cases like families with children.

Refugees who are accepted – and who want to go to faraway Canada, as some Syrians have indicated they prefer to stay closer to home – are flown to Toronto and Montreal. Most are transported by military aircraft, but commercial airlines like Air Canada have also offered assistance. At the airports, separate customs and immigration facilities have been set up.

Canadian enthusiasm contrasts with debate over refugees in US

Upon arrival, refugees receive permanent resident papers, a social insurance number and a provisional health card. They have the same rights as Canadians: to work, to health care, and to education. Only the right to vote is reserved for citizens (permanent residents can apply for citizenship after four years).

In ‘welcome centres’, the Canadian Red Cross provides refugees with winter coats, hats and boots. Then they can join people or organizations who ‘sponsor’ them, such as family members or representative of aid organizations and churches. Those who have no direct sponsor are housed by the government. Some get temporary housing at military bases. The refugees are spread out across the country, more or less proportionally to the population by province. All 10 provinces are participating. 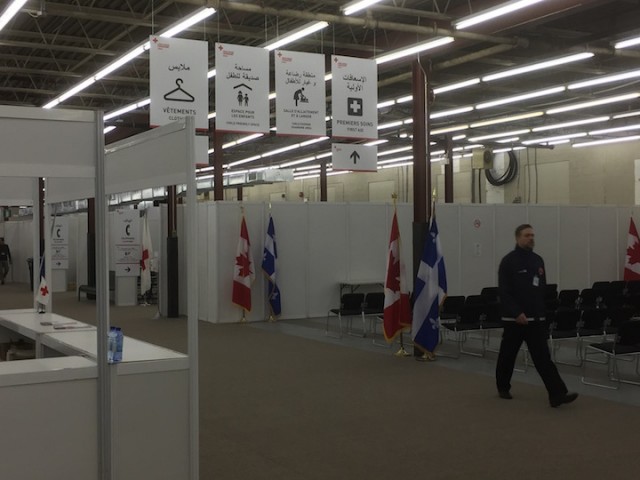 Welcome centre near the airport in Montreal, where Syrian refugees receive immediate needs, such as winter clothing.

Altawil thinks it’s a great initiative. “It’s a very nice step, a question of humanity,” he says. “Trudeau has acted quickly and we appreciate that. We are in constant communication with our relatives and we will now help them to build a new life here.”

The Canadian population has also embraced the initiative. Thousands of people have registered as volunteers to accommodate Syrian refugees or help them in other ways. They have also donated food, clothing, furniture and other necessities. A woman from Quebec took an initiative to knit winter hats, which quickly grew into a collective project to make 25,000. Social media are full of expressions of support and national pride.

“The the willingness of people to help is strong”

Paul Clarke of the organization Action réfugiés Montréal says Canadians are showing “a huge public outpouring of generosity”. In his view, the initiative reminds many people of previous Canadian help for refugees, especially to boat people from Vietnam in 1979 and 1980. “The government is showing leadership on refugee issues, and the people are following quite happily. People were fed up with the ungenerous spirit of the previous government. Everything is possible now, and that led to a flowering of generosity among the Canadian population.”

The Canadian enthusiasm for accepting Syrian refugees stands in contrast with the debate in the United States, where more than half of state governors have said they refuse to admit Syrian refugees to their state. President Barack Obama wants to welcome 10,000 Syrian refugees to the U.S. in the coming year. In response to the attack in San Bernardino, California, the Republican presidential candidate Donald Trump has suggested barring all Muslims from entering the U.S.

Trudeau, the eldest son of former Prime Minister Pierre Elliott Trudeau, who introduced a policy of official multiculturalism in the 1970s, promotes a vision of diversity and openness. “This is something that we are able to do in this country because we define a Canadian not by a skin colour or a language or a religion or a background, but by a shared set of values, aspirations, hopes and dreams that not just Canadians but people around the world share.” 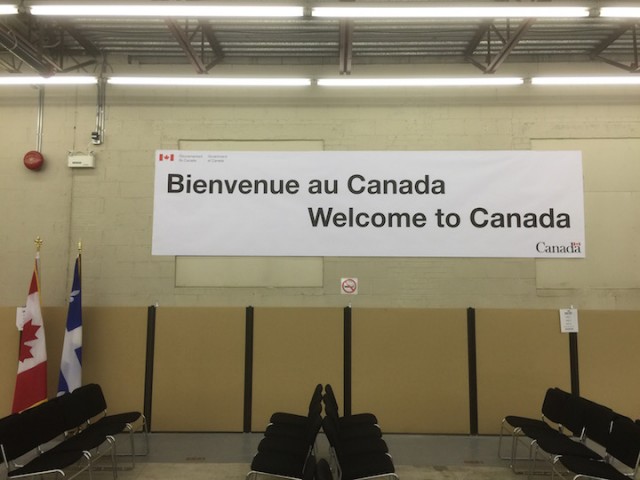 There is little formal opposition to that notion in Canada. Even those who have been critical, such as the rising conservative Brad Wall, premier of Saskatchewan, say they agree that refugees are welcome in principle. Wall insisted on a strict selection process, primarily focused on security and without “artificial deadlines”. His comments prompted a demonstration in Regina.

Meanwhile, logistical challenges remain daunting, and it is questionable whether the March 1 deadline will be met. With about 23,000 refugees to go, nobody seems to know exactly when the next plane arrives, who is on board, where people are housed and how donated goods can be accessed.

Even so, Action réfugiés Montréal’s Clarke is not worried. “The government has a lot of resources, and the willingness of people to help is strong. So there’s a way to process people fairly quickly.”