More than 30 seniors are feared dead after a fire swept through a retirement home in Quebec. Fighting the flames and recovery of the victims has been hampered by extremely cold temperatures and a thick layer of ice where water from firehoses froze.

More than 30 seniors are believed to have died during a raging fire that swept through a retirement home in the Canadian province of Quebec. The remains of five victims have been recovered; almost 30 others were still missing as of last night, many of them seniors with limited mobility or dementia. About 20 residents of the home survived the fire.

It is unclear what caused the inferno in L’Isle-Verte, a town of roughly 1,500 people, about 200 kilometers northeast of Quebec City. The fire began shortly after midnight. Within a short time, an entire wing of the home, La Résidence du Havre, was engulfed in flames. The older wing of the three-storey building was made of wood and did not have a sprinkler system. 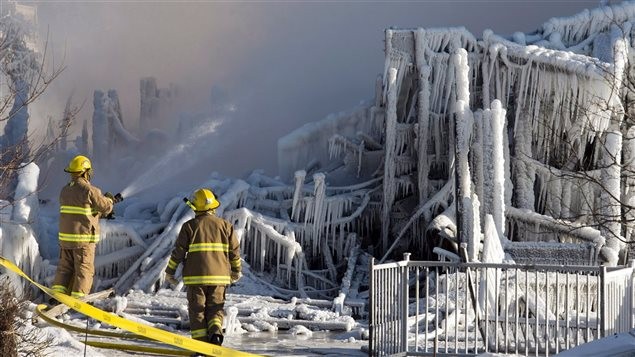 Firefighters at the senior’s residence in l’Isle-Verte that has been destroyed. Foto CP

Eyewitnesses reported that part of the complex was reduced to ashes within an hour. Some elderly people reportedly sought refuge on balconies, but attempts by family members to rescue at least one of them failed because of the intensity of the fire. “People don’t understand what happened,” Yvan Lévesque, a restaurant owner in the village, told the CBC. “It went so fast, nobody could do anything.”

Most of the residents of the home were 85 or older, and needed assistance to move around. According to media reports, two employees were present when the fire broke out. Arnaud Côté, an 84-year-old resident, helped three of his fellow residents to get outside. “Everybody was screaming for help,” he said. “I went into the corridor from my apartment and heard the alarm ringing. There was a lot of smoke. I woke up my neighbours, I yelled: there is a fire, we have to go!”

“It went so fast, nobody could do anything”

Efforts to fight the fire were hampered by extremely cold weather, with temperatures around -20 degrees Celsius and wind chill to -30 due to a cold wind that fanned the flames. The local fire department called in reinforcements from the region. Fire hoses froze, and firefighters had to alternate rapidly to prevent hypothermia. Ice has covered the remnants of the home and the immediate area with a layer of ice 30 centimeters thick in some places.

This makes it difficult to begin the investigation into the cause of the fire, according to a spokesman of the Quebec provincial police force. The first priority will be to recover bodies from the icy ruins, Guy Lapointe said. “When you want to go in and maybe retrieve the people who are there, you want to do it very delicately,” he said. “Breaking the ice, you don’t want to damage the scene and obviously you want to do it respectfully for the potential victims.”

The fire in L’Isle-Verte is the second major disaster in Quebec in seven months. Last July, a train carrying crude oil derailed in the town of Lac-Mégantic. In the explosions and an inferno that followed, 47 people were killed and 30 buildings were destroyed in the centre of town. Like in Lac-Mégantic, the disaster in L’Isle-Verte affects just about every person in the village; everyone knows victims. 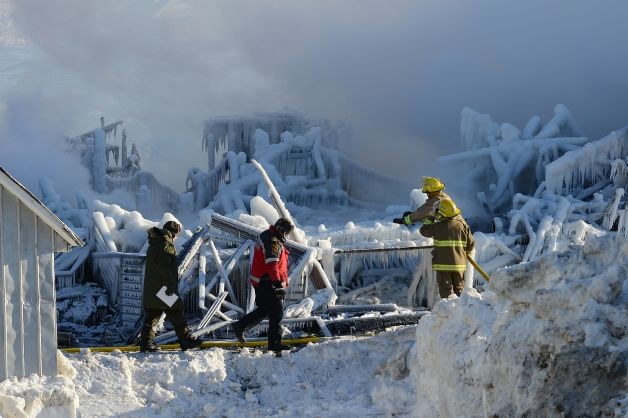 Quebec Premier Pauline Marois expressed sympathy for the people of L’Isle-Verte from Davos, Switzerland, where she is attending the World Economic Forum. “My government will do everything it can to help people there,” she said. Canadian Prime Minister Stephen Harper, on a visit to Jordan, expressed hope for the missing, but added that “there is very little doubt that the loss of life is very considerable.”

Meanwhile, the disaster has put a focus on regulation of retirement homes, particularly in the area of fire safety for people of limited mobility. Sprinkler systems are not mandatory in all parts of the country. In Quebec retirement homes, sprinklers have been mandatory since 2000, but not retroactively for homes built before that year. The wing of La Résidence du Havre that burned down was built in 1997. A newer section of the building does have a sprinkler system.