When Quebec Premier Pauline Marois called elections in Canada’s predominantly French-speaking province five weeks ago, it was assumed her party, the separatist Parti Québécois, would coast to victory. Instead, the PQ is under pressure in the polls. Voters are wary of another referendum on independence.

In front of a few hundred supporters in a room in Trois-Rivières, a town about 150 kilometers northeast of Montreal, separatist leader Pauline Marois makes an impassioned plea for her re-election as premier of the Canadian province of Quebec. During a campaign rally, the leader of the Parti Québécois (PQ), which aims to make the predominantly French-speaking province a sovereign country, promises to protect the French language and unique culture of the province of 8 million people.

“We will always stand up for our culture with great pride, and we do so in French,” says Marois, who has led a PQ minority government for the last 18 months. She hopes to win a majority mandate in today’s provincial election. In the French dialect of the province, she enumerates the policies of her government, ranging from a populist tough stance towards minorities to a progressive euthanasia bill. 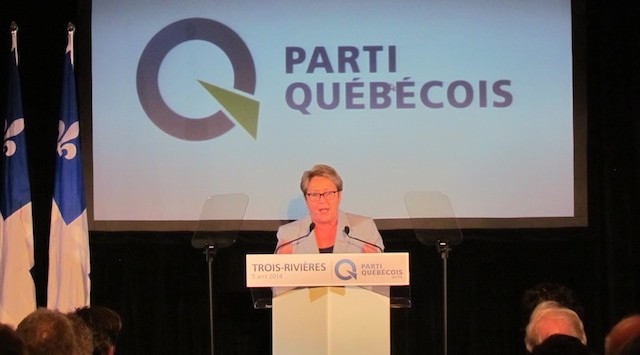 Quebec premier Pauline Marois addresses supporters of her party, the Parti Québécois, during a campaign rally in Trois-Rivieres.

However, Marois does not say a word about the main goal of her party: secession of Quebec from Canada. For although that is the raison d’être of the PQ, the holy grail for its loyal followers, and her own greatest wish, most voters in Quebec are not interested in a new round of bickering about the foundations of the Canadian federation. The PQ’s number one priority, a referendum on independence, is therefore carefully avoided.

With good reason: opinion polls have shown consistently that two-thirds of the population of Quebec don’t want another disruptive plebiscite on the issue. The PQ has held two referendums on secession: in 1980, 40 per cent voted in favour; in 1995, almost 50 per cent. Since then, the ‘national question’ has been on the back burner. The PQ would love another chance, but voters recoil from the social unrest and economic stagnation associated with a referendum.

This contradiction between the objective of her party and low enthusiasm among the people for a renewed struggle for independence has hurt the PQ during the election, which Marois herself called five weeks ago. Her cabinet was gaining popularity, and at the beginning of the campaign, it was generally assumed that the PQ was headed for victory, to be followed by a new campaign for independence.

“We will make Quebec a country!”

Instead, the PQ has suddenly found itself on the defensive. The party hoped to reap the electoral benefits of a controversial bill to ban religious symbols from the public sector, a proposal aimed against religious minorities. As part of that bill, the Marois government wants to forbid public sector workers, including those in hospitals and schools, from wearing headscarves or turbans – a popular plan among the French-speaking majority in Quebec, but hugely controversial among others in society and in the rest of Canada.

Marois was so optimistic that the initiative would be a stepping stone to a majority mandate that in the early days of the campaign, she began speculating aloud what an independent Quebec would look like: borders with the rest of Canada would remain open, she mused, and Quebec would continue to use the Canadian dollar. A star candidate, media mogul Pierre Karl Péladeau, stood by Marois’ side when he pumped his fist into the air with the words: “we will make Quebec a country!”

Voters were confronted with the PQ agenda – and abandoned the separatists for parties with different priorities, such as economic growth and health care. According to opinion polls, the pro-Canadian Liberal Party of Quebec, which was defeated 18 months ago after nine years in government, especially seemed to benefit. An untested third party, the Coalition Avenir Québec (CAQ), is also hoping for a breakthrough.

Canada is holding its breath, hoping the PQ will be voted out of office today. Due to the battle between several parties in Quebec’s first-past-the-post electoral system, the outcome is difficult to predict – and 65-year-old Marois, who is unexpectedly fighting for her political life, has not given up hope, she tells the crowd in Trois-Rivières. “We will fight until the last minute.”

One Response to Quebec separatists overplay their hand in elections