In the 1980s, a ban on bicycles in Midtown Manhattan was considered for safety reasons. Now, there’s a bike boom in New York. With the construction of hundreds of miles of bicycle paths and a brand new bike sharing program, New York is unexpectedly becoming a true cycling city.

Dressed in summer clothes and with a helmet on, Adrianne Weremchuk is cycling along 8th Avenue in Midtown Manhattan. Yellow cabs are racing by, pedestrians are stepping onto her path without looking – but it doesn’t bother the New York resident. She’s on her way from 23rd Street to a work meeting on 42nd on a brand new public bicycle, stopping halfway for a red light.

“Cycling is very convenient,” says Weremchuk, an enthusiastic user of the new bike sharing system in the city, Citibike. “You have to be careful, because cars have a sense of ownership of the road. But so many people bike now, it’s becoming part of the culture. We have some catching up to do in terms of integrating cycling, in that sense we should be more like Amsterdam.”

Believe it or not, New York is following that example. The bicycle is gaining traction in the city, one of the most urban places in the Western world, where the automobile has been dominant for decades. With the construction of hundreds of kilometers of bicycle paths, and the launch of a large-scale bike sharing program following other world cities (sidebar below), New York is undergoing an unlikely transformation into a true cycling city. 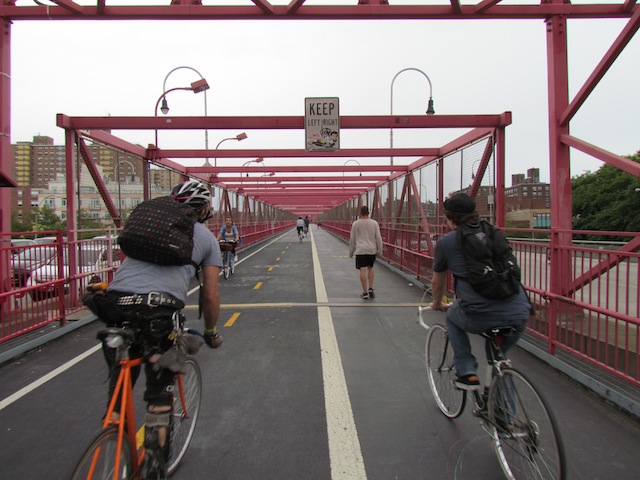 Cyclists on the Williamsburg Bridge between Manhattan and Brooklyn.

“We’re in the midst of a bike boom in New York,” says Paul Steely White, Executive Director of Transportation Alternatives, an organization serving the interests of cyclists. Bicycle use has grown by 65 per cent in the past six years, he says. “Infrastructure improvement has led to an acceptance of bicycling. It has become fashionable to embrace the bicycle, not just as a mode of transportation, but as a lifestyle.”

How different it used to be. In 1987, New York City mayor Ed Koch wanted to ban bicycles from parts of Midtown for safety reasons. After protests, that proposal was rejected – but for many years, cycling in New York remained the exclusive domain of eccentric daredevils. According to Jon Orcutt, policy director at the New York Department of Transport, cyclists were mainly “bike messengers or people who were just into bikes in some way and were fearless enough to mix up with city’s traffic.”

The driving force behind the turnaround has been the policy of outgoing mayor Michael Bloomberg. At his initiative, and that of his Transportation Commissioner, Janette Sadik-Khan, some 450 miles of bike paths have been put in place – one of the most notable physical changes in the city during his administration.

And they are not just the kind of bike lanes you see a lot in North America: a line on the pavement between the traffic and the parking lane, and for the rest the cyclist is left to his own devices. Instead, so-called ‘cycle tracks’ have appeared along several thoroughfares (1st and 2nd Avenues, 8th and 9th Avenues): bicycle paths directly next to the sidewalk, protected on the street side by a low concrete barrier and a buffer of a meter or so before the parking lane begins, to protect cyclists from opening car doors. 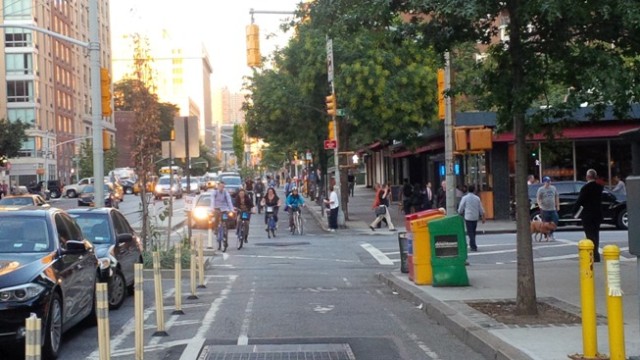 This design, with a physical separation of cars and bicycles, was groundbreaking in the United States, says Orcutt. “It’s all about making people comfortable on the street,” he says. “New York is ideal for bike travel in many ways, because a lot of people are traveling only a few miles a day. So bike travel is often the quickest way to go. The more you make it safe and attractive to people, the more they just naturally use bikes for city travel.”

The tracks are a pleasant way to pass through Manhattan. Streets go by in rapid succession: 28, 29, 30, 31. Still, you have to keep your eyes and ears open at all times for pedestrians who step onto the path, turning cars, and street vendors and others who view the path as a handy spot to park or move their carts. But apart from those obstacles (illustrated in the video below), you can come a long way in 20 minutes.

“Manhattan sounds very large, but in reality it is relatively compact,” says Marc van der Aart, owner of Rolling Orange, a Dutch bicycle store in Brooklyn. “You can cycle its length in an hour, and parts of Brooklyn are also close by. As far as the scale is concerned, it’s really quite ideal, much better than Los Angeles.” However, he says, there is no relaxed ‘freewheeling’ in the Big Apple. “You have to be five times more alert as in the Netherlands, you should shout and ring your bell, raise your voice.” 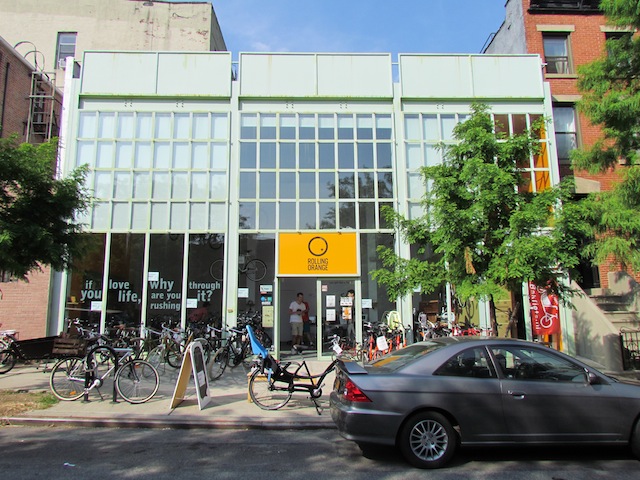 Cyclists are not the only ones doing so. Opponents of the rise of cycling in New York are also making their voices heard. They say that the city’s streets have not become cleaner or less congested, but less safe. “It’s dangerous,” says Deb Sokolowski, a resident of the Lower East Side. “Cyclists follow no rules. They go through red lights. And if you say something about it, you get yelled at.”

A cyclists rides by against the direction of traffic. “You’re driving the wrong way!” Sokolowski screams at him. “Oh my God!” he yells back sarcastically as he speeds off. “You see?” she says. “Cyclists are treated preferentially, what more do they want, someone to pedal for them?”

According to Dorothy Rabinowitz, a commentator with the Wall Street Journal, “the most important danger in the city is not yellow cabs, it’s the bicyclists who veer in and out of the sidewalk, empowered by the city administration.” New York is not Amsterdam, she said with an eye roll during an online interview on WSJ Live. “The mayor’s stamp on this city is permanent, unless some enterprising new mayor re-digs all the streets to preserve our traffic patterns.”

That is not likely. While the candidates in the upcoming election for a new mayor have varying opinions about bicycling, none of them proposes to remove Bloomberg’s bike lanes. Rather, at issue is whether the pro-bicycle policies of the outgoing mayor will be continued with equal fervour, says Steely White of Transportation Alternatives.

“We’ve striven to educate the leading candidates that bike lanes are not just an optional amenity, but necessary safety improvements,” he says. “I think there is a growing realization that there is no going back to the time that New York City was all cars all the time. The city is at its best when we are supporting bicycling.”

Van der Aart of Rolling Orange sees it as an opportunity. He imports Dutch ‘oma’ bikes and ‘bakfietsen’ for a new market segment: Americans who want a bicycle as a means of transportation, as opposed to sports minded cyclists with a race bike for recreation. “It has become fashionable to buy a bicycle,” he says. As far as he is concerned, New York is living up to its early days as New Amsterdam in the 17th century. “After 400 years, we’re conquering New York back, by bicycle.” 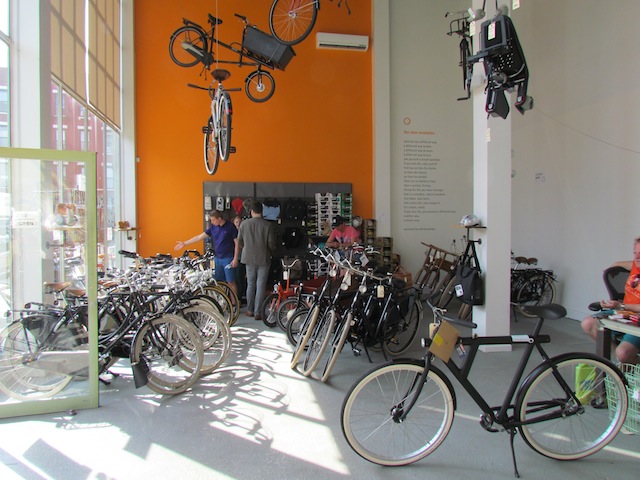 Dutch bicycles for sale at Rolling Orange in Brooklyn.

They are a new element of the street decor in New York: Citibikes. The blue, sturdy bicycles, sponsored by Citigroup, have been available since the beginning of this summer for transport in the city, intended for relatively short distances.

With about 6,000 bicycles and more than 330 stations, Citibike is the largest public bike sharing program in North America, just ahead of Montreal, where the system was designed and the bicycles were made. Users can rent bikes for an unlimited number of free rides up to 30 minutes (45 minutes for members). After that, a meter starts running.

Many other world cities, including Paris and London, have public bike share programs, but in New York, the introduction of Citibike was accompanied by the requisite drama. Hurricane Sandy caused postponement of the launch. When stations began appearing on street corners, critics complained the city was marred by ‘gravestones’. The software on the terminals was plagued by problems. 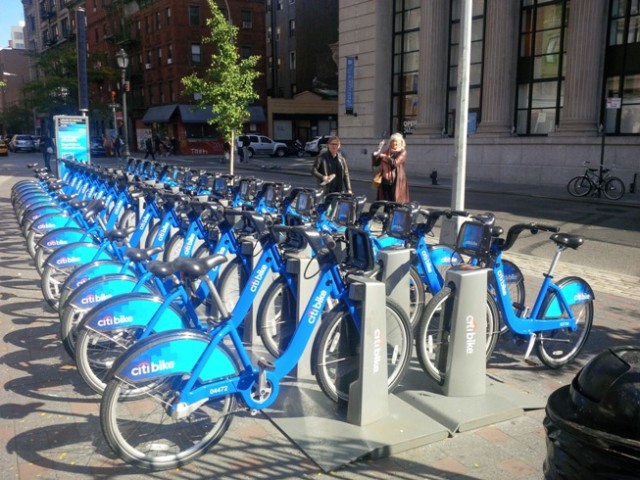 “People have found it’s an easier way to get around town,” says Dani Simons, spokesperson for NYC Bike Share, which manages the rental bikes. “New Yorkers were really hungry for it, because the subway doesn’t go everywhere and has lots of repairs and service disruptions. Buses are slow.”

The complaints have largely subsided, Simons says at the organization’s headquarters in Brooklyn. There are plans to expand the system to 10,000 bicycles. Citibike is a private company with a profit-sharing arrangement with the city. Simons is optimistic: “there will be profits to share.”