From bat noises to Mondrian: the Museum of Modern Art in New York is exhibiting sounds in its first-ever show on sound art. “Our intention was never to blow out people’s ear drums.”

It sounds as if a downpour is clattering on the roof and against the windows when you arrive on the third floor of the Museum of Modern Art (MoMA) in New York. You can hear it from the escalator before you see what is producing that sound: a panel several meters long with 1,500 small speakers, each emitting a different, constant tone. Separately, the tones are simple and soft; together, they produce an overwhelming noise.

Visitors lean towards the piece, ‘Microtonal Wall’ by American artist Tristan Perich, and put their ear to one of the small speakers. They walk by it, which gives the effect of an ascending or descending sound, like that of a passing airplane. Some bend down or stand on their toes to hear more tones. What you hear depends on where you stand.

“You can decide to hear it as a harmony or as a single sound,” says a museum guide. “Because of the speed of sound, it sounds different in every place.”

The entertaining work is a prelude to Soundings: A Contemporary Score, an exhibition on the use of sound in contemporary art. The show, which runs until early November, is a snapshot of international sound art, as applied by 16 artists from 9 different countries. It is the first exhibition at MoMA dedicated entirely to art you can hear.

Although sound has been used in art for decades, museum goers have become more aware of it in recent years, says Leora Morinis, assistant curator of the exposition. “Sound art is always around, but it’s usually one piece in the stairwell of an institution,” she says. “It gets relegated in a certain way. We felt that the general public is keenly aware of it; the challenge was to make a group show out of it.”

Part of that challenge was practical: in the central area of the show, the sounds of various works sometimes interfere with each other. For a number of pieces, separate rooms have been set up, like ‘Ultrafield’ by Norwegian artist Jana Winderen. She made recordings of natural sounds that are inaudible to the human ear, such as those of fish, insects and bats. These are, at an adjusted frequency, played on loudspeakers in a darkened room, so that visitors are immersed in knocking sounds, squeaks, buzzing and fluttering from another world.

Winderen’s work fits within an important category of sound art that uses recordings, like other works by Taiwanese artist Hong-Kai Wang and Danish artist Jacob Kirkegaard. But there are also installations using sound, like ‘Frame for a Painting’ by British artist Haroon Mirza. For his changing installation, he picks a painting from the collection of the hosting institution, makes a frame of flashing LED lights for it and plays loud, rhythmic tones of techno music from loudspeakers on a coffee table. 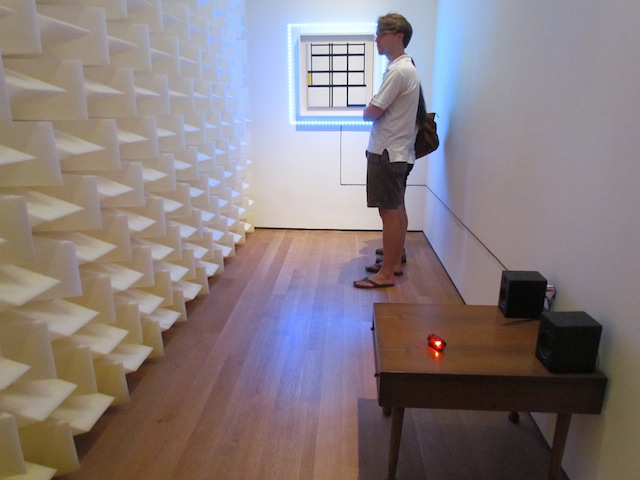 ‘Frame for a Painting’, installation by Haroon Mirza, in this instance with a canvas by Mondrian.

For the version at Soundings, Mirza chose a canvas by Piet Mondrian from MoMA’s permanent collection: ‘Composition with Yellow, Blue and White I’ from 1937. In its fresh context, the painting takes on a rhythmic, futuristic air. “Mondrian was very interested in music and rhythm,” says Morinis. “I wasn’t expecting the Mondrian to feel so at home in that installation, but it really does.”

The exhibition also includes a number of visual works that don’t make any sound, such as mathematical drawings on sheet music by Australian artist Marco Fusinato. Partly because not all works are blaring from loudspeakers, the New York Times has called the show “timid”. Morinis disagrees. “Our intention was never to blow out people’s ear drums or overpower them with a kind of dominating sound,” she says. “We wanted to explore a sample of what’s going on in the field today, and give the stage to a new generation of artists.”

A work that, like ‘Microtonal Wall’ is entertaining, has been set up in the courtyard of the museum: ‘A Bell for Every Minute’, by American artists Stephen Vitiello. He recorded bells and whistles all over New York, from a bicycle bell on the Upper East Side to the closing bell of the New York Stock Exchange. Every minute, one is played; at the hour, they all sound at once.

Spectators are standing near five white speakers, trying to figure out which bell they’re hearing from an engraved list of all 59. They start talking to each other: was that the Japanese peace gong at the United Nations, or the church bell of Cobble Hill? As the top of the clock approaches, the tension rises. Then, a clanking and jingling can be heard: the ‘chorus of bells’, a tranquil glockenspiel. One visitor had imagined more: “I was expecting a cacophony.”