Correspondent Frank Kuin > Sports > ‘The Cosmos are back’, now without Pelé

‘The Cosmos are back’, now without Pelé

The New York Cosmos made soccer history in the 1970s and 1980s, starting a craze for the sport in the United States. Now, the pioneering team of American professional soccer is getting a restart – without big stars as in the glory days, but with young players.

Accompanied by cheerleaders, a brand new soccer team enters the pitch of artificial grass in a modest stadium on New York’s Long Island. One by one, the players – dressed in white and, like AC Milan and Real Madrid, sponsored by the airline Emirates – are greeted by soccer legend Pelé. Nearly 12,000 spectators cheer as the announcer exclaims: “The iconic Cosmos are back in the game!”

Moments later, it’s kickoff time for the first American pro soccer match in 29 years with the New York Cosmos, a reincarnation of the most legendary soccer club in U.S. history. Despite skepticism by American soccer experts, the fledgling team is embarking on an ambitious mission to breathe new life into a soccer craze in New York in the 1970s and 80s.

Yes, a soccer craze in the U.S., the country where the beautiful game never really seems to break through. During their heyday from 1975 to 1984, the Cosmos were a pioneering exception to that rule. Their home games at the former Giants Stadium drew tens of thousands of spectators, often more than baseball, with a peak of almost 78,000 in 1977. Star players and team bosses partied with celebrities like Mick Jagger at the city’s most popular nightclub, Studio 54.

And the Cosmos had no shortage of star players, starting with the Brazilian legend Pelé, who led the squad from 1975 to 1977. The leading Italian forward Giorgio Chinaglia was signed in 1976. A year later, soccer greats Franz Beckenbauer from Germany and Carlos Alberto Torres from Brazil came to New York. 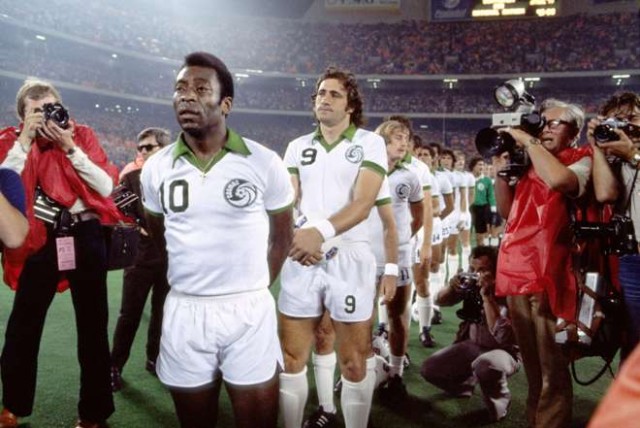 The New York Cosmos in their glory days, with star players Pele and Giorgio Chinaglia.

From the Netherlands, former Ajax midfielder Johan Neeskens played for the Cosmos for five years starting in 1979. And ex-Feyenoord defender Wim Rijsbergen was described as “the best defender of the league” by the New York Times in 1981. Even Dutch superstar Johan Cruyff played a few matches, before he signed with the Los Angeles Aztecs and later the Washington Diplomats. In total, the Cosmos signed players from 14 different countries. 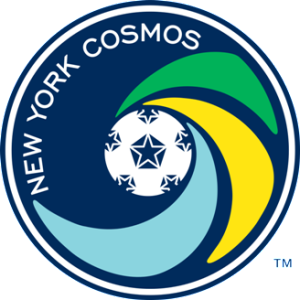 “The team was a United Nations of players, they had a different nationality in almost every position,” says reporter Michael Lewis with BigAppleSoccer.com, who covered the Cosmos back then. “They started winning and people got excited. Tens of thousands of people showed up, even in the rain. We thought soccer had made it in the U.S., it was pure magic.”

Owned by Steve Ross, CEO of entertainment conglomerate Warner, the club had bought its way from an inglorious start on a bumpy field to international fame as the top team of the North American Soccer League (NASL), at that time the premier soccer competition in North America. Between 1977 and 1982, the Cosmos won the championship four times – before the division went under due to a lack of a national television contract. In 1985, the Cosmos were disbanded.

Now, there is a long-awaited relaunch within the revived NASL, re-established in 2010 as a minor league with eight clubs. And in the final minute of the first half, the patience of the fans is finally rewarded: young Bosnian forward Peri Maroševic scores for the Cosmos against the Fort Lauderdale Strikers. The audience jumps to its feet and chants ‘olé olé’.

“The Cosmos are the greatest football team of all time”

“Finally, we have a soccer team again in New York,” says Jeff Thompson, who has come to the game with his wife and small son. The current standard-bearers for soccer in the region are the New York Red Bulls, but they are based in neighbouring New Jersey, he says. “The Cosmos are the greatest football team of all time. They have been in hibernation. But one day, they will beat Ajax.”

The new Cosmos don’t lack the necessary ambition. Managed by a new owner, sports magnate Seamus O’Brien, the club hopes to return to the summit of American soccer. About $100 million has been invested, and there are plans for a brand new home stadium on Long Island. “Very soon we are going to have the same kind of team as before,” says former star player Carlos Alberto, who was on hand for the debut. 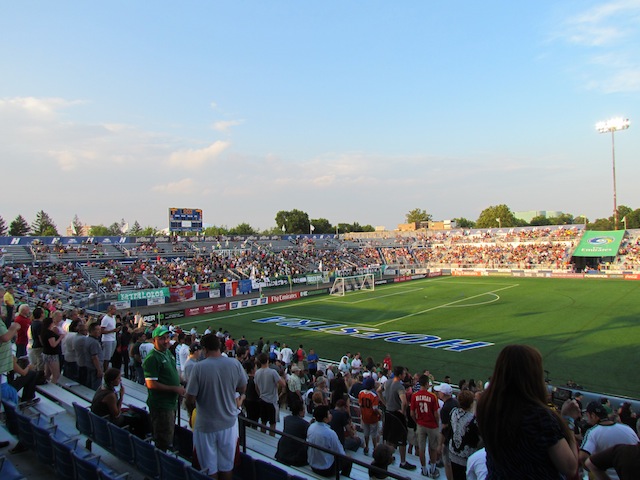 Hofstra University’s James M. Shuart stadium in Long Island is the home base of the New York Cosmos.

But according to observers, it will be a big challenge for the Cosmos to reach the same heights. International star players are much more expensive now, even at the end of their careers. In addition to Americans, the new Cosmos have players from Brazil, Italy, Japan and other countries – but hardly any big names. The most famous player is Spanish midfielder Marcos Senna, a former player on the Spain’s national team. It is doubtful whether the Cosmos can ever sign a Beckenbauer again – never mind a Pelé.

Moreover, there is much more competition in the American soccer market these days than there was in the 1970s. The premier league in North America is now Major League Soccer (MLS), with 19 clubs in the U.S. and Canada, including the Red Bulls. Manchester City and baseball club the New York Yankees have plans for a second MLS franchise in New York. The NASL is a minor division, which hopes to eventually rival MLS. Teams cannot advance from one league to the other.

Finally, it is harder to excel now because the overall level of soccer in North America has increased significantly in the last 30 years. “Back then, the question was if there were good local players,” says Lewis. “Now, American players are good enough to play on European teams. It’s a different equation.”

Therein lies the legacy of the Cosmos, according to Lewis. In its glory days, the team played a crucial role in interesting American spectators in soccer. “We are still reaping the benefits of that,” he says. But the Cosmos are also victims of that success: “it is much less likely to build an overwhelming team in this country.”

On the pitch, the new Cosmos barely pull off a victory in their inaugural match. After an equalizer by the Strikers early in the second half, the game seems headed for a draw – until the Italian Alessando Noselli scores for the Cosmos in stoppage time. The Cosmos are back. “We’re very happy to have started a new future with the Cosmos,” says coach Giovanni Savarese after the match. “We have a good foundation to build a strong team. Patience is the best virtue for us now.”

Coach Giovanni Savarese speaks during a press conference after the Cosmos debut. Midfielder Marcos Senna is at right.