Hockey in a stately old bank

A historic bank building in downtown Toronto is home to the Hockey Hall of Fame, an extensive museum about the national sport of Canada. To many Canadians, a visit to the ‘Cathedral of Hockey’ should be part of the education of every child.

By Frank Kuin in Toronto / Photos by Francis Mariani

Beaming with excitement, John and Brenda O’Neill and their sons Kyle and Sean pose for a picture with the Stanley Cup, the huge silver championship trophy of pro ice hockey in North America. The holy grail of the National Hockey League (NHL), with its silver rings bearing the engraved names of former champions, is the centerpiece of the Hockey Hall of Fame, one of the biggest tourist attractions in Toronto.

The historic cup is at the centre of a stately room with oak floors and walls, in a former bank in Toronto’s downtown core. It is surrounded by panels bearing the names of several hundred star players who have been inducted into the Hall of Fame. It is appropriate that the cup should be kept in a treasury, and that a 19th century version of the trophy can be viewed in an old bank vault. Because to many Canadians, the Stanley Cup is one of the most valuable objects in the country. 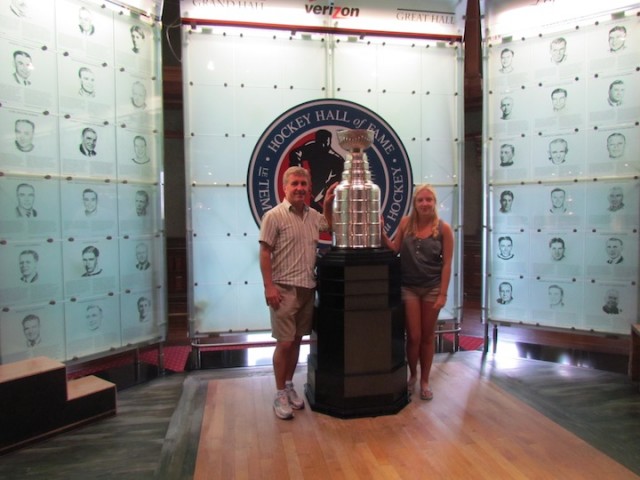 Visitors pose with the Stanley Cup.

“We’re big hockey fans,” says O’Neill, who has come to downtown Toronto from the suburb of Oakville to visit the hockey museum with his family – a day of entertainment and education about Canada’s national sport. “I grew up playing hockey, my sons now play hockey. They like to see the Stanley Cup. I like to get them to go back to the origins of our national sport. It’s in our blood.”

The Hockey Hall of Fame, also described as the ‘cathedral of hockey’, is a huge sports museum. The Canadian star attraction, which extends into a modern extension of the bank building, is visited by 350,000 to 375,000 people every year. Canadians take ice hockey – they call it simply hockey – very seriously, it turns out during a tour of an extensive exhibition of skates, sticks, pucks, jerseys and other objects pertaining to ‘the fastest game on Earth’.

At the entrance, visitors are greeted by masks worn by goalies through the years to protect their faces from the pucks that are fired at them at blistering speed. Some of the masks, like one worn by Toronto Maple Leafs goalie Johnny Bower in the 1960s, would not look bad on Hannibal Lecter. It is kept in a display case, along with worn-out shin guards and a blue-white jersey of the Leafs, who won the Stanley Cup four times in Bower’s days.

Other star players also have their own displays in the central ‘NHL zone’, such as the legendary Maurice ‘the Rocket’ Richard, captain of the Montreal Canadiens in the 1940s and 1950s. The Canadiens were almost unbeatable for many years; a replica of the locker room in their old home arena in Montreal is a testament to their decades-long dominance of the sport. Richard was a superstar in the province of Quebec; there was even a canned tomato soup named after him. A riot broke out in 1955 when he was suspended for the rest of the season.

The undisputed megastar is Wayne Gretzky, nicknamed ‘the Great One’, a modest Canadian athlete who scored a record 894 goals during his 20-year career. The net into which he fired number 802 in Los Angeles in 1994, breaking the previous record, is part of the collection of the museum. Some of Gretzky’s hockey sticks are also on display, along with jerseys of the teams for which he played, including the Edmonton Oilers and the L.A. Kings, always with his characteristic number 99. 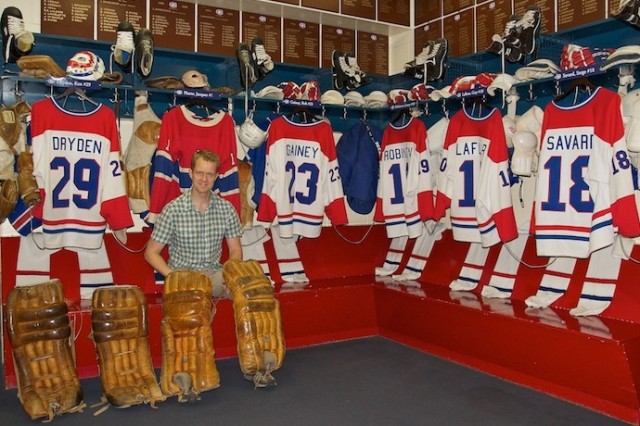 The author in the replica of the Montreal Canadiens’ locker room.

Gretzky was inducted into the Hall of Fame immediately after his retirement in 1999. Normally, players can only be nominated for a spot on the wall of honour around the Stanley Cup three years after they retire. Gretzky did not just come to the museum for his induction, however; he also showed up as a visitor, with his own children. Politely they stood in line to buy tickets – but not for long, says Kelly Masse, spokesperson of the Hall of Fame. “It’s always good to have players here,” she says. “Some just give us their artifacts because they know that the fans want to see them.”

To counter criticism that the Hockey Hall of Fame was too focused on the NHL, there are also exhibits about international and Olympic ice hockey. A gallery about the history of the sport contains an old-fashioned ‘Dutch skate’, as worn by players in the 19th century. Although games in which an object is passed around on ice have been played for centuries, the museum adheres to the official interpretation that the first recognized hockey game – on skates, with sticks, a puck and hockey rules – was played in Montreal in 1875.

One of the latest additions to the museum is a display with items from the winning goal by young star player Sidney Crosby at the Winter Games in Vancouver in 2010. His golden goal in extra time of the men’s hockey final between Canada and the United States delivered the host country its most sought-after gold medal – the crowning achievement of the Games. The stick and gloves Crosby used are a new addition to the museum, along with the puck and the net into which Crosby scored.

Kyle and Sean O’Neill are very impressed. “They wanted to see the Olympic setup,” their parents say. “They’re big fans of Crosby.” 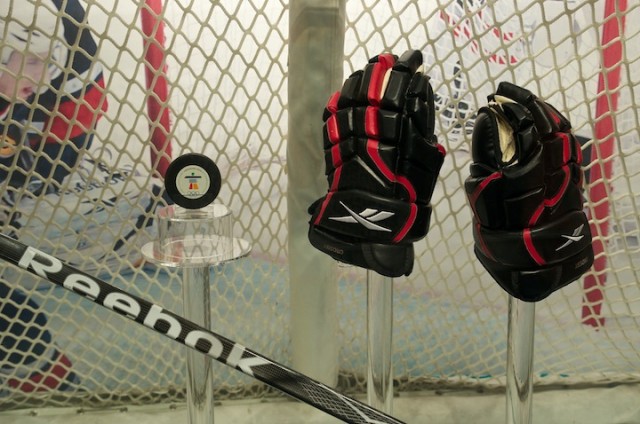 Gloves, stick, puck and net of the winning goal by Sidney Crosby during the men’s hockey final at the Vancouver Games.

Austin wants to re-establish Formula One in U.S. In ‘Vansterdam’, supervised injections may continue
Share