Correspondent Frank Kuin > Canada & the US > Austin wants to re-establish Formula One in U.S.

Austin wants to re-establish Formula One in U.S.

Montreal’s Circuit Gilles-Villeneuve has long been the scene of the sole Formula One race in North America. But now it is getting competition. A brand new F1 circuit is under construction in Austin, Texas. Will American fans get excited about a new race in the United States?

By Frank Kuin in Austin, Texas

In a Ford SUV, construction supervisor Butch White is driving on a dirt road that is to become the Circuit of Americas, a new racetrack in Texas that will host a long-awaited return by Formula One racing to the United States next year. The route has already been laid out in the sandy, rolling countryside near the Texas capital, Austin. But the asphalt has not yet been laid, so it’s a bumpy ride in the summer heat.

“We’re actually driving underneath the track,” says White, as he rolls the vehicle downhill from turn one, the highest point of the track with a view of the Austin skyline, towards turns two and three, marked with numbered flags. The dirt road lies about 3 meters below where the circuit will be, because the track will be built on a foundation of several layers, explains White. “It’s built to last,” he says. “In twenty years, the circuit will still be the same as new.”

That’s the way the people backing the track want it. If it is up to them, the Circuit of the Americas will become the permanent base for Formula One in the U.S. To the surprise of many, management of the global sport has signed a 10-year contract with the organizers in Texas, led by former race car driver Tavo Hellmund. The United States Grand Prix, last held in 2007 in Indianapolis, will be hosted by Austin from 2012 to 2021 – a new chapter in F1’s long-standing struggle to establish a permanent foothold in America. 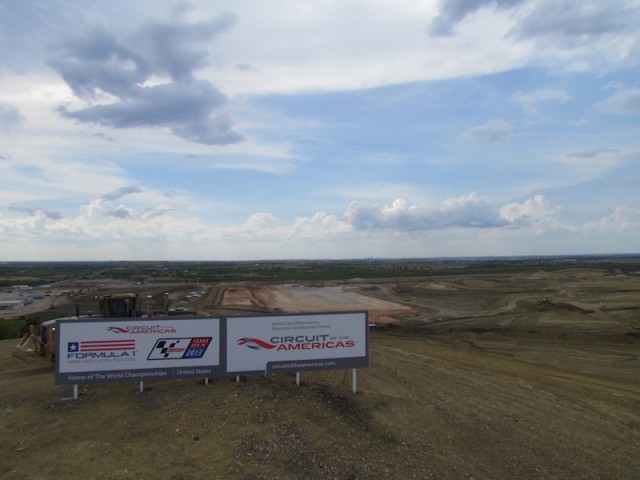 The ‘Circuit of the Americas’ under construction near Austin, Texas.

“This is the foundation to re-establish Formula One racing in the United States,” says Bruce Knox, vice-president of the circuit. Hellmund, a personal acquaintance of F1-boss Bernie Ecclestone, had “a dream” to bring Formula One to his home city, Knox explains. That plan gained momentum after F1 and the Indianapolis Motor Speedway parted ways in 2007.

“We’re creating a phenomenal, traditional European track design,” says Knox. “We’re 100 per cent focused on making the U.S. Grand Prix in Austin one of the best races in the world.”

It is an ambitious goal, because Formula One’s history in the U.S. has been lacklustre. The last attempt by the international F1 circus to set up shop in the racing city of Indianapolis, where the U.S. Grand Prix was held at the famous oval from 2000 to 2007, ended in failure. Especially the race of 2005, when only 6 cars started due to tire problems, was a low point. The fiasco is thought to have turned off American race fans, who mostly prefer domestic competitions such as IndyCar and Nascar.

For that reason, Austin is leaving nothing to chance. The Circuit of the Americas or COTA, a private investment of $250 million, is the first racetrack in the U.S. built specifically for Formula One. It was designed by Hermann Tilke, the German designer who is also responsible for other modern circuits, such as those in Malaysia, Bahrain, China and Turkey.

“The circuit takes advantages of the elevation changes in the hill country of Austin, and is laid out to optimize the challenge to the drivers,” says Knox. “From a fan perspective, in some areas of the track you’ll be able to see 75 to 90 per cent of the circuit at one time.”

In designing the 5.5 kilometer circuit, Tilke paid tribute to some favourite sections of well-known circuits in Europe. For instance, the combination of corners ‘Maggots and Becketts’ at Silverstone in Britain is copied in Austin. Just like at Hockenheim in Germany, there will be a stadium section. And turn 8 of the racetrack in Istanbul, a new favourite among drivers, is replicated as one of the 20 turns in Austin – in the opposite direction, as cars will be driving counterclockwise in the U.S.

The biggest attraction of the circuit should be the straight along the pit lane. It runs steeply uphill from the starting grid to turn 1, a left-turn hairpin at an elevation of about 40 meters.

Former F1 driver David Coulthard praised the concept during a recent visit to Austin. “When you have that elevation change, you really feel like you’re on a roller coaster in one the fastest cars in the world.” He had wondered why Formula One was going to Austin, but he was beginning to understand it better, he said. “If we can have drivers really looking forward to coming to drive on this track, then that enthusiasm will grow to the fans.”

The elevation should also be an advantage for the roughly 120,000 spectators the circuit will be able to accommodate. Some of the stands will offer views of more than 70 per cent of the track. Moreover, the proximity of Austin, a city with a vibrant nightlife known for its live music scene, will make the “fan experience” complete, says Knox. He thinks there is “pent-up demand” for Formula One in the U.S. after a five-year absence.

There is little evidence of that yet in the vicinity of the project. Except for grazing cattle, a gas station and some modest homes, the vast area is almost deserted. Skeptics wonder whether the megaproject will succeed in a city without a proven affinity for Formula One. There is opposition to the fact that the state has agreed to contribute $25 million each year to pay for the right to host the Grand Prix.

Franklin Lockett, a passerby, is nonetheless delighted that Formula One is coming to the area. “It will create revenue and bring a lot of jobs,” he says.

“It will create revenue and bring a lot of jobs”

On the construction site, near Austin’s international airport, excavators and cranes are at work. Tunnels to provide access to the pits on the inside of the track have been built, though the pit facilities still have to be constructed. About 200 construction workers are employed by the project, a number that will rise to between 800 and 1,000 in the coming months, says construction supervisor White. With just one year to the first race, the construction schedule is ambitious.

Workers may get a five-month reprieve. Ecclestone has come up with a plan to postpone the inaugural Grand Prix, moving it from the sweltering month of June, immediately following the Canadian Grand Prix, to November, when the weather is milder. In that proposal, the race in Austin would be the penultimate event on the F1 calendar, prior to the last race in Brazil. Whatever is decided, White is confident the project will be finished on time. “We’ll be ready to race the day they want to race.”