Some members of Canada’s First Nations are proud to be involved in the Olympic Winter Games. Others say the Games don’t help Native Canadians advance in society. The indigenous ‘Disney show’ presented in Vancouver is at odds with years of neglect, according to critics.

Dressed in traditional attire and with feathers in his headdress, Mike Dangeli leads a group of drum dancers of the indigenous Nisga’a people at an outdoor show in downtown Vancouver. Dancing and singing, the men in red and black capes bang hand drums harmonically. Some of them are wearing carved wooden bird masks. The instruments are painted with graphic depictions of ravens and orcas.

In indigenous West Coast culture, the drum symbolizes the sounds of creation, Dangeli explains to a crowd of visitors to the Olympic Winter Games. “It’s a wonderful experience to share our history and our songs, our ceremonial wealth with the world,” he says after the performance. “Our cultural expressions define us as First Nations people. I’m glad we have this unique opportunity.” 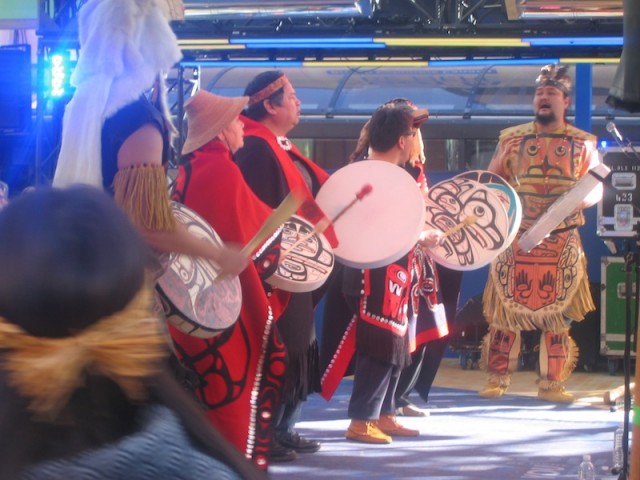 Mike Dangeli (right) leads a group of drum dancers of the Nisga’a First Nation during a performance at the Olympic Winter Games in Vancouver.

Dangeli is one of the members of the First Nations peoples of Canada who have embraced the Olympics as a chance to showcase their culture. Indigenous symbols are omnipresent at the Vancouver Games: the logo is an Inukshuk, an Arctic route marker of the Inuit; the Olympic medals are imprinted with the stylized figures of Northwest Coast Indian art. Traditional dancers and chiefs played a prominent role during the opening ceremony.

The logo of the Olympic Winter Games in Vancouver is an Inukshuk, an Inuit route marker.

Many aboriginals in British Columbia take pride in their involvement. “It is important that we tell our own authentic story to the world,” says Leah George-Wilson, a member of the Tsleil-Waututh First Nation. “Nobody else tells it for us. For too long we’ve been invisible in our own territory, now we are visible. We went from not being able to show our culture and speak our language to standing on a stage and be proud of who we are.”

George-Wilson is on the board of the Four Host Nations, a coalition of four indigenous peoples on whose territory the sports competitions are held: Musqueam, Lil’wat, Squamish and Tsleil-Waututh. That coalition has been involved in the organization of the Winter Games from the beginning – a first in Olympic history. In exchange for their support of the Games, they have received a voice, and employment, in the preparations. And money: $20 million (Canadian) for each group.

“Our population has decided to actively participate and take some ownership, not watch from the sideline,” says George-Wilson. “In return, a recognition has been made that this is our traditional territory. The Games have shown that to the world. The Canadian government has recognized that when you organize something here, we need to be accommodated. That is important.”

“Poverty of aboriginal people in this country is a national disgrace”

But not all indigenous leaders have been as impressed with the organizing committee’s regard for the Indian population. Critics say the sudden respect is inconsistent with many years of neglect of aboriginal interests by the Canadian government. Using the slogan ‘No Olympics on Stolen Native Land’, they are protesting against the spending of billions of dollars on the Winter Games, while aboriginal peoples often live in poverty, with high unemployment, poor housing and health care, and problems such as alcoholism and drug addiction.

“I don’t condemn the Four Host Nations for taking advantage of economic opportunities in relation to the 2010 Olympics,” says Stewart Phillip, president of the Union of British Columbia Indian Chiefs. His organization, which represents 80 of the 203 First Nations in the province, has withheld its support in protest. “There are 199 First Nations throughout the province of B.C. that did not receive direct benefits from the Olympic Games.”

The Olympic medals in Vancouver are imprinted with the stylized figures of Northwest Coast Indian art.

Phillip, who was taken from his family as a child to be assimilated into white society, objects to the “Disney-esque portrayal of indigenous peoples” during the Winter Games. “We are portrayed as being young and vibrant, upwardly mobile, and having every reason to look forward to a very bright economic future,” he says. “But that misrepresents the reality of the indigenous people in Canada and throughout the province of B.C. Because quite frankly, the poverty that represents the everyday reality of the aboriginal people in this country is nothing less than a national disgrace.”

Phillip points out that the Native population barely shares in the extraction of natural resources from resource-rich British Columbia, such as logging – despite the fact that the indigenous population has never ceded the land of the province west of the Rocky Mountains through treaties, as was done in most of the country. On paper, the territory belongs to the aboriginals, a legal fact that has been recognized by the Supreme Court of Canada.

In practice, First Nations ownership of the land is not respected by the government and industry. Negotiations over land rights in the province have stalled after decades of talks, to Phillip’s dismay. “If we had access to the wealth that flows from our traditional territories to business and industry and government, we wouldn’t be in the predicament that we are currently in,” he says. “We really have very little to celebrate.” 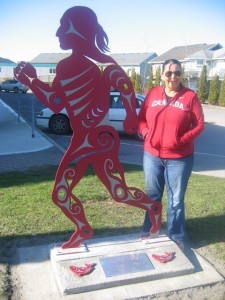 Debra Sparrow, an artist of the Musqueam First Nation in Vancouver, designed the Olympic hockey jerseys, with indigenous symbols.

The First Nation with the most valuable land is the Musqueam First Nation, which lays claim to the land on which Vancouver is built. Most members of the group of about 1,000 people live on a reserve southwest of the city. The community looks better than most remote Indian reserves in Canada, with bungalows along leafy streets. Still, the Musqueam are struggling with poverty and high unemployment: more than half of the population is on welfare.

Gail Sparrow, a former chief of the Musqueam, does not think the Winter Games will change that. She commends the pride indigenous youth took in their role in the opening ceremony. “It was very vibrant,” she acknowledges. “It instilled self-esteem in our youth, and pride in First Nations.”

“But what else did we get from it? It is an empty bag,” she says. “We’re recognized as a Host Nation, but people don’t know we’re here. Once the Olympics are gone, everything will go back to normal. I see no lasting benefit to our people.”