The drastic melt of the Arctic sea ice is a serious threat to the survival of polar bears, scientists say. The polar bear population is also under pressure because of the hunt by the Inuit. Still, efforts to list the symbol of the Arctic as a threatened species are met with resistance.

There’s no doubt in Steven Amstrup’s mind: the drastic melt of Arctic sea ice poses a serious threat to the survival of the polar bear. If the ice cover of the Arctic Ocean in summer continues to decrease at the rate it has in recent years, two-thirds of the world’s polar bear population of 20,000 to 25,000 will be gone by mid-century, the prominent U.S. polar bear expert predicts.

“Polar bears are the sentinel species for climate change, because they’re tightly tied to the sea ice,” says Amstrup, a biologist with the United States Geological Survey with 24 years of experience studying the polar bears of the Beaufort Sea, north of Alaska.

“Polar bears use the sea ice for essentially all aspects of their life cycle: they locate mates out there, they breed out there, they care for young out there. Most importantly, the sea ice is where they get their food: they feed almost exclusively on ring and bearded seals and they fetch these animals from the surface of the ice.”

Because of this dependence on sea ice, “habitat is the bottom line,” says Amstrup, co-author of a series of recent research reports by the Geological Survey into the effects of climate change on polar bears, the ultimate symbol of the Arctic. 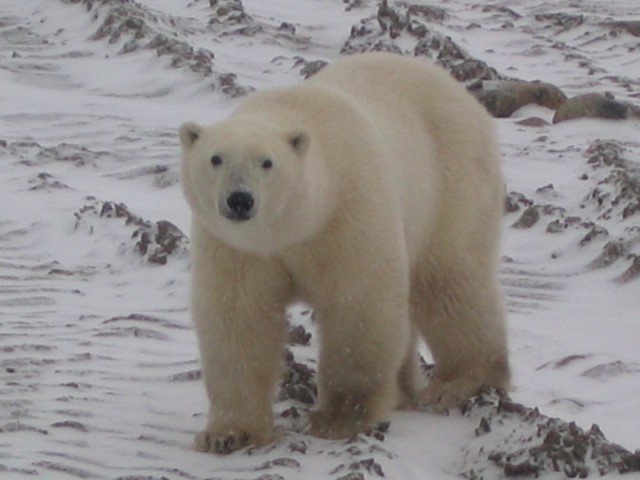 Polar bears depend on sea ice for their survival.

Amstrup is one of several scientists who have testified before the U.S. Fish and Wildlife Service, which will soon decide whether the polar bear should be designated as a threatened species because of the melting of the sea ice. The ‘threatened’ classification is one step below endangered species, which indicates that the species is facing extinction.

The listing decision is a sensitive matter in both the U.S. and Canada, where about two-thirds of all polar bears in the world live. If the polar bear becomes a threatened species, as environmental organizations want, it would be the first time that status is granted on the basis of climate change. That would be a groundbreaking step – especially in the final year of the Bush administration, which has not given high priority to measures aimed at fighting global warming.

“Polar bears are the sentinel species for climate change”

It is uncertain whether it will come to that, though, as there is also strong opposition to the recognition of polar bears as a threatened species. The Inuit of northern Canada are strongly against the measure because it would lead to further limitations on their hunt of polar bears. In addition, oil companies would face new restrictions on drilling in Alaska. According to these opponents, there is no immediate crisis in the number of polar bears – and therefore as yet no reason for a change of status.

Polar bear experts from the U.S. and Canada disagree. They point to a drastic reduction of the ice the bears prefer – ice of a specific density over the relatively shallow waters of the continental shelf. This preference by the bears has been established by researchers like Amstrup.

They have mapped the roaming patterns of polar bears using collars with radio transmitters (polar bears are targeted with an anesthetic shot from a helicopter and outfitted with a collar).

“Lots of sea ice over the continental shelf is a big deal for polar bears,” says Amstrup. That preferred sea ice is deteriorating rapidly, he says, with inevitable consequences for the health of the bears. “When we projected these forward in time using global climate models, we found that ideal preferred polar bear habitat is likely to persist beyond mid-century only in the Canadian archipelago,” he says.

“The population in the southern Beaufort Sea is likely to decline to within about 1 per cent of its current size in 50 to 100 years, so that’s functional extinction.” Other areas of the Arctic also face the disappearance of polar bears, he warns.

Concrete data on demonstrable declines in the numbers of bears are still scarce, however, partly because most polar bear populations are difficult to study. Figures are available for one subgroup, in Canada’s relatively accessible western Hudson Bay.

The Canadian Wildlife Service has done intensive research on those bears since the 1980s – initially as a result of an international treaty to protect polar bears against excessive hunting, but in recent years also in a context of climate change.

Surveys in 1987 and 2004 revealed a population decline of 22 per cent, from 1,200 to 935 bears, says Nick Lunn, an experienced polar bear researcher with the Canadian Wildlife Service. He blames the “dramatic decline” on a combination of climate change and hunting in Nunavut, the semi-autonomous territory of Canada’s Inuit people.

“Hunting quotas were based on a population of 1,200, and they just continued harvesting as though there were 1,200 bears,” he says. Nunavut recently reduced the quota from 56 to 38 bears.

Lunn and his colleagues found a direct link between the annual breakup of the sea ice in the Hudson Bay and the health of the polar bears in the area. Like some other relatively southern polar bear populations, the bears of western Hudson Bay go ashore in summer because their habitat melts completely. There is little food for them on land, so before they go ashore, they hunt for seals on the ice to sustain them.

“Polar bears everywhere are dependent on sea ice for survival”

Since the 1970s, breakup happens three weeks sooner on average, so the bears have less time to build up their reserves for a longer stay ashore. This is especially hard on females with cubs, “because the females have to use some of those fat reserves to produce milk for cubs and provide for those cubs,” says Lunn. “We’ve detected that the sea ice breakup is directly related to cub survival: earlier breakup means reduced cub survival, it means reduced sub-adult bear survival.”

In addition, scientists have found a reduction of weight in anesthetized bears – work Lunn does every year. “All those factors will at some point in the future have an impact on the population size,” he says. 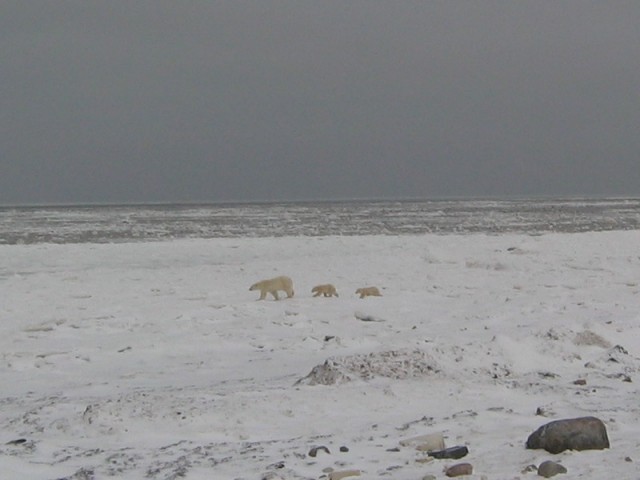 Polar bear with cubs on the shore of Hudson Bay near Churchill, Manitoba.

Lunn rejects the suggestion that polar bears can simply move further north for better conditions. “The bears go ashore where the last remnants of the ice deposits them as it melts, that has to do with currents in the bay. They don’t know otherwise, and they’re not going to go anywhere else.”

In addition, he says, “Wherever there’s good polar bear habitat, there are already polar bears.” If that habitat disappears, the polar bears disappear, Lunn concludes. “Polar bears everywhere are dependent on sea ice for survival. Without sea ice, they’re not going to survive.”

In northern Canada, every polar bear counts ‘Reconciliation is something we have to work on every day’
Share