Steven Pash, a native Canadian of the Cree population in northern Canada, is walking down the front steps of the Canadian Parliament with a big smile on his face. He has just witnessed the apology by the Canadian government for the former policy of Indian residential schools, from the public gallery in the House of Commons. He feels relieved, he says.

“It was very emotional,” says Pash, a man in his fifties dressed in a black suit and sunglasses. “The government’s willingness to recognize what we went through has taken a big load off our shoulders. Finally the people of Canada realize that is was wrong to force native people into mainstream society.”

As a six-year-old boy, Pash was taken away from his parents in northern Quebec, and sent to a boarding school for Indian children, first in Quebec, later in Ontario. The purpose of the roughly 130 residential schools, which operated between about 1850 and 1970, was to assimilate Indian children into white society. About 150,000 children attended the schools. Pash was picked up by bush plane; his parents, who lived off the land, could not do anything about it.

“They took away my family ties and my culture”

“They took away my family ties and my culture,” says Pash. “We weren’t allowed to speak Cree in school. They told us: ‘that’s not the life to live.’ If you didn’t do what the superiors told you, you were punished. When you’re six years old, you do what you’re told. I thought it was normal, that I had to do this to become a human being.”

But it wasn’t normal at all, the Canadian government has since recognized. It ran most of the schools in cooperation with churches. Ten years ago, a ‘statement of regret’ was offered. That was considered insufficient. Yesterday, a full apology was given during an elaborate ceremony in the House of Commons: apologies for the loss of culture and identity of the students, for breaking their family ties, for physical, psychological and sexual abuse, for neglect and for the death of an unknown number of Indian children — and for the very purpose of the policy.

That purpose was “racist”, an MP acknowledged. An official of Indian Affairs put it like this in 1920: “We will continue this approach until there isn’t a single Indian in Canada who hasn’t been absorbed into the body politic.” Prime Minister Stephen Harper said yesterday that “there is no place in Canada for the attitudes that inspired the Indian residential schools system to ever again prevail.”

Phil Fontaine, national chief of the Assembly of First Nations, gave a unique address in Parliament, where normally only members are allowed to speak. He spoke of “a new dawn in relations between us and the rest of Canada”. 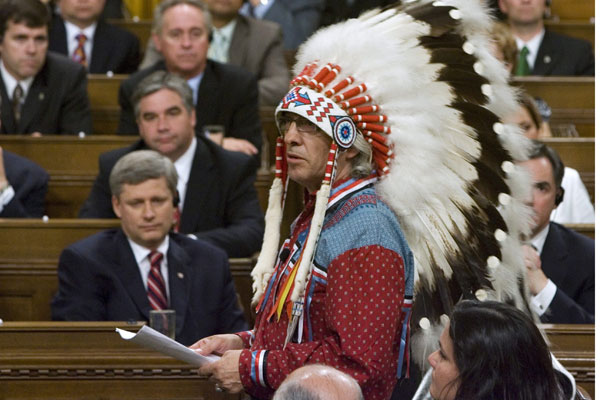 The historic apologies follow those offered in February by the government of Australia to its Aboriginal people for residential schools (an estimated 100,000 children were sent to those institutions). In Canada, the apologies are linked to a compensation settlement: in total, nearly $3b has been set aside for indemnity payments to all former students who are still alive. Pash has received $40,000, he says. Also, a Truth and Reconciliation Commission has been established to record experiences of former students and facilitate atonement.

Experiences such as those of Ray Mason of the Peguis First Nation of Manitoba. He attended three residential schools for a total of 12 years, he says on Parliament Hill. “They did everything possible to stop you from being yourself,” he remembers. “When I spoke my native language, they pulled by tongue out with a pair of pliers and pinched. I actually tried to scratch the redness off my arms, because I didn’t want to be an Indian. I was driven into that way of thinking.”

“Going through that system, just being a number, we developed into a different breed of people,” Mason says. “It made us into hard people. I was angry and bitter. We weren’t very good parents. We had problems with alcohol. It caused a chain reaction.”

Mason, who also witnessed the ceremony from the public gallery,  is moderately positive about the apologies. “It’s the most we could expect.”

“I believe our people can become strong again”

But there is criticism as well. Margaret Sutherland of the Cree population of northern Ontario hopes that Harper will match his words with actions to improve the lives of native people in Canada, who often live in poverty on reserves. She points out that his government has rejected an accord for billions of dollars of investments into health and education for native people, reached by Harper’s predecessor, Paul Martin.

Sutherland attended residential school in Fort Albany until 1966. She always carries the experience with her, she says. “We never saw our parents. It’s hard to face your adulthood if you’ve been separated from them. That’s why the residential schools still affect the younger generation of today. They have been disconnected from our cultural structure, many struggle with addiction and alcoholism.”

Still, Sutherland has confidence in the future. “I believe our people can become strong again, that we can have our languages and traditions again,” she says. The apologies may help with that recovery – but they’re not enough in and of themselves. “It’s easy to say it in words, but reconciliation is something we have to work on every day.”