In the town of Churchill, on the shore of Canada’s Hudson Bay, people and polar bears live closely together. Because of climate change, the polar bear population is under pressure. Bears that wander into the village are not killed, but captured and moved away. That’s good for polar bears and for tourism.

A freezing cold, early winter morning on the barren tundra near Churchill, a northern town in Canada: temperatures hover around -20 degrees in the western Hudson Bay area, known for its location on the migration route of polar bears. There is little wind and visibility is good – excellent conditions for a ‘bear lift’, a helicopter transport of several polar bears from the local ‘polar bear jail’.

Officers of Manitoba Conservation, a provincial government agency, appear from an old hangar near the Churchill airport that serves as a holding facility for captured polar bears. An anesthetized bear is lying on the back of their truck. The animal doesn’t know it, but she’s about to make a flying escape from prison.

Inside the facility, dozens of polar bears are held. They have wandered into the town of about 1,000 people in recent weeks, and have not been scared away by warning shots. This happens regularly in Churchill around this time of the year, when polar bears in the area are waiting on shore for Hudson Bay to freeze over. 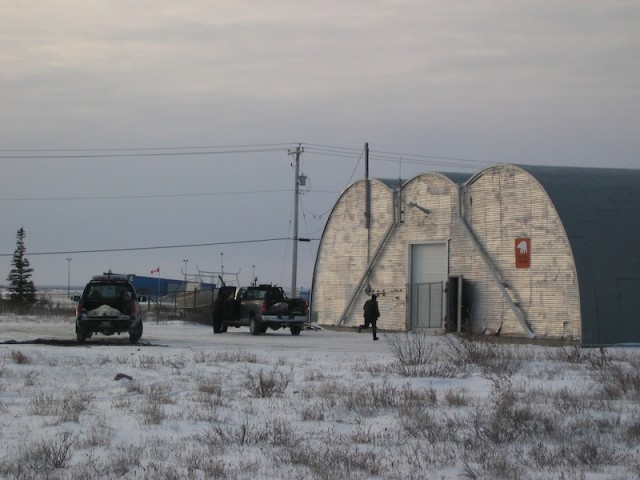 An anesthetized bear from the ‘polar bear jail’ in Churchill is prepared for helicopter transport to the tundra.

Polar bears in the jail have been intercepted by the local polar bear patrol, either with an anesthetic shot, or by walking into one of the traps on the edge of town. Guards of the so-called ‘Polar Bear Alert’ keep an eye out for approaching polar bears day and night.

Jailed bears are locked up for 30 days on average, in individual cages. They are not fed, because they eat little while they are on land anyway, but they do get fresh snow. Every so often, a few of the bears are taken away by helicopter, to a place on the tundra at a safe distance from civilization.

The aim of the strategy is to keep both people and bears safe, says Shaun Bobier, regional superintendent with Manitoba Conservation. He leads the polar bear patrol of six men carrying out today’s transport. “The program was designed to protect people against the bears, but we also want to keep the bears safe, because they are a protected species here.”

“We want to ensure that this population of bears stays stable”

In the past, bears that posed a danger to people were killed, but that is no longer permitted in Manitoba. Studies have shown that the polar bear population of the region has shrunk by a fifth in the past 20 years, partly because of climate change. “We want to ensure that this population of bears stays stable,” says Bobier.

In that effort, every bear counts.

The bear to be released today is lying motionless on her stomach, legs spread, on the back of a pickup truck. She is a mother bear, who was caught with two cubs on the edge of Churchill. One of the cubs had walked into a trap.

It takes four men to lift the unconscious mother bear, weighing about 200 kilograms, and lay her on the ground, on top of a big net that has been laid out. A male bear under anesthesia is also brought out for the transport. The sleeping cubs are put in the back seat of the helicopter.

The mother and cubs were only caught last night, but they have been given priority for release because the small bears “are not in great condition,” Bobier explains. “They are quite skinny.”

This is probably due to the shorter season polar bears have to hunt for food. Because of global warming, the ice on Hudson Bay, the hunting area of the bears, has been melting several weeks earlier in recent summers, compared with a few decades ago. That means less time to hunt for seals on the ice and to build up reserves before the bears go on land during the ice-free summers. There is little food for them on shore.

“Every day a polar bear is forced to shore earlier, it is not hunting for seals,” he explains. “Every week means 10 kilograms of reserves less to get through the summer. Some bears are getting quite thin in the fall, they must get back on the ice to start feeding again. They may be pushing the extremes of their physiology. It’s a serious situation for the bears; they cannot simply pack up and move north, or hunt for different species.” 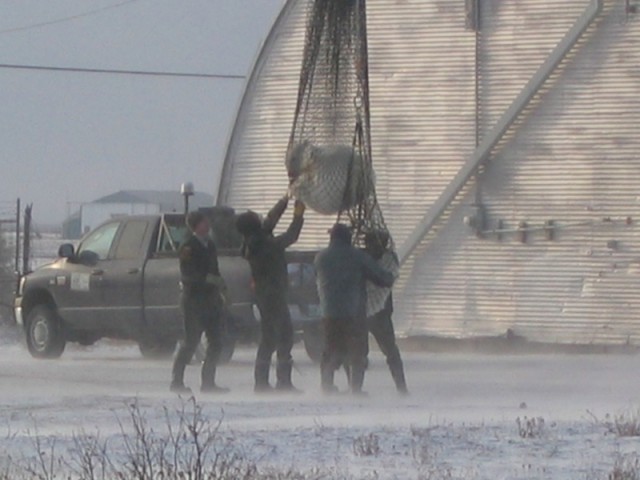 An anesthetized polar bear lifts off, carried by a helicopter in Churchill.

Some polar bears look for food in Churchill. Until recently, an old landfill was a magnet for bears, but it has been closed. Now, garbage is stored in a covered hall before it’s transported to the south by train. Still, Churchill residents must be very vigilant every autumn, when the bay has not yet frozen over. Anyone can suddenly come face to face with a hungry polar bear.

The helicopter blades start spinning, snow drifts up and the aircraft lifts off the ground. A hook at the end of a long rope is attached to the four corners of the net with the mother bear. Guided by members of the patrol team, she comes off the ground. The second bear also goes up.

Together, they’re airborne in front of the polar bear jail before the helicopter lifts them higher up into the sky. Then, the aircraft flies away in a northwestern direction. The polar bears are flying towards the desolate tundra.

The air transports are a costly and labour-intensive form of bear management, Bobier acknowledges. But they are effective: bears are rarely shot, and there hasn’t been a human fatality because of a polar bear encounter in years.

“There is no other program of its kind in the world, this is the only one,” he says. “It is expensive to move bears, but it is a good thing for the province of Manitoba to make an investment in.” 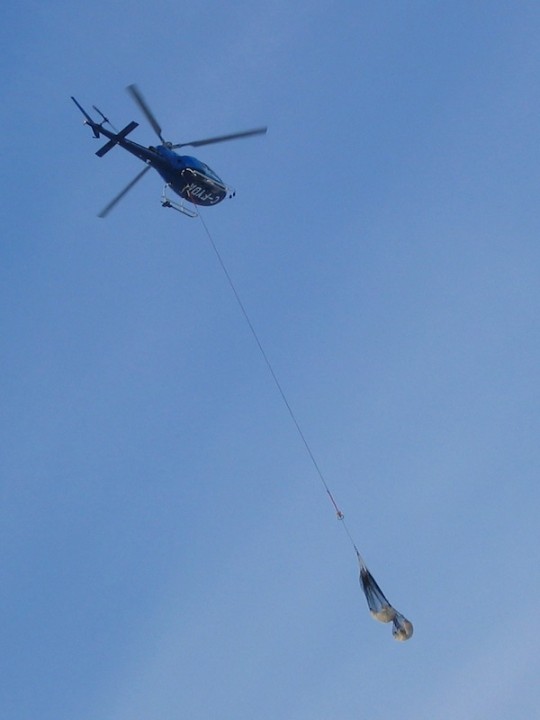 Flying polar bears — animals under anesthesia are taken away by helicopter.

The policy is partly motivated by self-interest. The polar bear population of western Hudson Bay is one of the most southern groups in the world – and therefore one of the most accessible. Visitors come to Churchill every fall to see polar bears.

But their southern location also means the bears are on the front line of climate change. “If the trend of melting sea ice continues, Hudson Bay could be largely ice free by the middle of the century,” says Goodyear. “Polar bears would then disappear from this area. There would still be polar bears further north, but not in this area anymore.”

About 60 kilometers northwest of Churchill, the transported polar bears are released. In a deserted area, with no other bears in a wide area that can disturb them, they are slowly lowered to the ground and taken out of the nets. They are laid down in a ‘waking up position’, on their stomachs with legs spread, so that there is no lateral pressure on their lungs. They are beginning to move their heads and legs a little bit, but it will take another hour or two before they regain full consciousness.

Once the bay freezes, all bears from the polar bear jail can be released in quick succession. They will go out onto the ice, where they are most in their element. No one will see them again until next summer. For now, the helicopter heads back to Churchill; there is a second group of polar bears to be released onto the tundra.