TIFF is relevant for Hollywood and world cinema

The Toronto International Film Festival, which opens tonight, has grown into one of the leading film festivals in the world. “In Cannes, Hollywood is seen as the enemy, that is not the case in Toronto.”

Crowd control barriers have been set up in downtown Toronto, as the Canadian metropolis anticipates its annual transformation into Hollywood North. Starting tonight, Canadians roll out the red carpet for a stampede of Hollywood movie stars and filmmakers from the rest of the world, during the 38th edition of the Toronto International Film Festival (TIFF), which has become one of the most relevant festivals in the world.

A gala premiere of The Fifth Estate, a film about WikiLeaks starring British actor Benedict Cumberbatch as Julian Assange, and a role for Dutch actress Carice van Houten, will mark the start of a marathon of about 290 movies. For 11 days, Toronto will bathe in the spotlight of the international and especially the American film world, with a mega-festival that is now a highlight of the international cinema agenda.

Following on the heels of the Venice International Film Festival, it is Toronto’s turn to warm up the North American market for films that will compete for the favours of reviewers – and the general public. Because that is the main strength of Toronto, says Brian D. Johnson, film critic with Canadian news magazine Maclean’s: TIFF is largely a public festival, unlike Cannes and Venice, where journalists and industry representatives dominate. 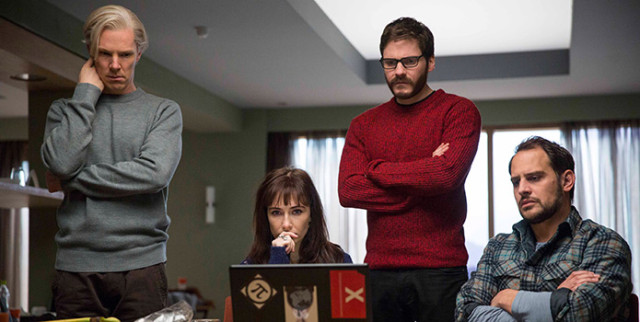 Scene from The Fifth Estate, with Benedict Cumberbatch (left) as Julian Assange.

“It turned out to be very valuable for film distributors and sales agents to have a major festival where there is a civilian audience that is sort of the closest thing that you could find to a typical Friday night movie audience in North America,” says Johnson. Although Cannes is the high altar of the movie world, it lacks that public element to some extent, he says. “You don’t really get a sense in Cannes of how a movie is going to play in a North American multiplex.”

In Cannes, Hollywood is “seen as the enemy,” says Johnson. “That is not the case in Toronto. Toronto likes to be the pluralistic festival that is friendly to one and all.”

Films that win the People’s Choice Award in Toronto usually perform well at the Oscars; indeed, they often win the Academy Award for Best Picture. Oscar winners from the last few years such as Slumdog Millionaire, The King’s Speech, and this year’s winner, Argo, were all screened at TIFF.

For that reason, producers, directors and film stars flock to Toronto to put their latest projects in the spotlight. This year, Meryl Streep is attending the gala premiere of August: Osage County, produced by George Clooney and based on the play by Tracy Letts about a family in Oklahoma, also starring Julia Roberts and Ewan MacGregor. Kate Winslet is the star of Labor Day by director Jason Reitman.

Matthew McConaughey is generating Oscar buzz with his role as AIDS activist Ron Woodroof in Dallas Buyers Club, for which he lost 20 kilograms. Ralph Fiennes directed The Invisible Woman about Charles Dickens, in which the British actor is reunited with his co-star from The English Patient, Kristen Scott Thomas. Brad Pitt and Michael Fassbender star in 12 Years a Slave by director Steve McQueen, which has already been well received at the Telluride Film Festival in Colorado.

Toronto, a megacity that is keen to rid itself of a reputation as an overgrown provincial town with a lack of culture, salivates at the prospect of being visited by all these world stars. But there’s also a tension in the concept of the festival, between the growing Hollywood content and the equally extensive program of world cinema, an important part of the festival since its inception in 1976.

“A lot of people have criticized TIFF, and it’s a legitimate criticism, that there are so many stars soaking up the spotlight,” says Johnson, “that world cinema does not get the exposure it deserves at TIFF because the media are so obsessed with the deluge of celebrities. But to be fair: the programming is still there. There’s still solid programming in world cinema, and even in avant-garde cinema. It’s not like the programming has sold out completely to Hollywood.”

This year, there are movies from 70 countries. The British-South African production Mandela: Long Walk to Freedom, a feature film based on the life of Nelson Mandela, will premiere in Toronto. The French film La Vie d’Adèle, which won the Palme d’Or at Cannes, is presented to the North American public in Toronto under the title Blue is the Warmest Colour. The Chinese production A Touch of Sin by director Jia Zhang-Ke is being described as a martial arts film about modern China.

Two Dutch films are having their North American premiere at TIFF: The Dinner by director Menno Meyjes, based on the book of the same name by Herman Koch, has scored a recommendation on an alternative list of highlights. And Borgman by Alex van Warmerdam, which was nominated for the Palm d’Or in Cannes, is shown in the avant-garde category of the festival.

Among the documentaries creating buzz are The Square’about the revolution that was unleashed in Tahrir Square in Cairo, and Tim’s Vermeer, by the duo Penn and Teller, about an inventor trying to discover the secret talent of 17th-century Dutch master Johannes Vermeer.

Reviewer Johnson is getting ready for a marathon. “Toronto has everything, it is a smorgasbord,” he says. “You’ve got all the best films from Berlin and Sundance and Cannes, and at the same time you’ve got this wealth of world premieres that become more and more important. The studios are looking to Toronto as the fall launch for awards season films.”