The Inuit people of northern Canada fear that their income from the seal hunt will dry up because of an import ban on seal products by the European Union. The indigenous population considers the hunt a lifeline and an important part of Inuit heritage. An expedition with hunter Joshua Kango.

At half past seven in the morning, Joshua Kango, an Inuit man in his sixties, is ready for a seal hunt in northern Canada. He shows up on a snowmobile at the point of departure in Iqaluit, the capital of the semi-autonomous Nunavut territory. Ullaakkut, he says – good morning in Inuktitut, the language of the Inuit in the eastern Canadian Arctic. He barely speaks English.

Kango, a sturdy man with a weathered face, is dressed in a snow suit with a fur collar. He has a double hat on and ski goggles that cover half his face to protect against the glare of the great, icy white we are heading towards. He’s also wearing tall winter boots, and thick gloves of beaver fur. At around minus 15 degrees Celsius, it’s relatively mild, but protection is needed against the Arctic wind on the exposed route to the hunting area. 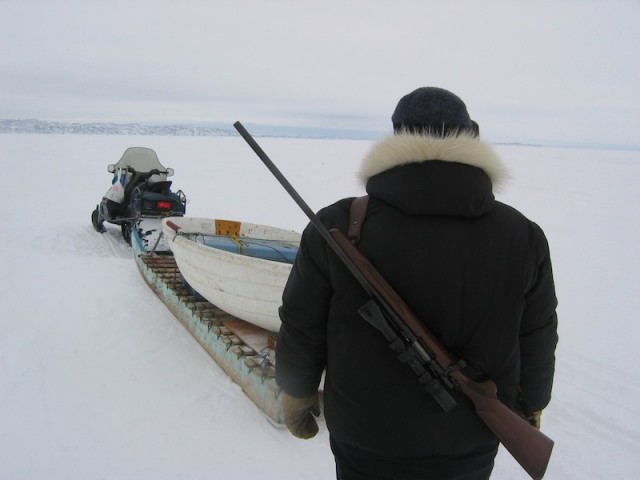 Hunter Joshua Kango is ready for a hunting expedition.

On the back of his snowmobile, Kango carries a bag with provisions, and a thermos with hot water. Behind the vehicle, he’s dragging a three-meter long dog sled with a small rowboat tied on top of it. It is equipped with two oars and a long stick with a hook at the end, to grab prey. Diagonally across his back, Kango has a hunting rifle. Its barrel sticks out over his left shoulder.

On average, Kango goes out like this to hunt for seals about once a week, he says through a translator before departure. “I hunt for food for my family and for other people who don’t have a hunter in their family, and for elders,” he says. Sharing is very important in the traditional culture of the Inuit. Until just a few decades ago, they were a nomadic people who survived in one of the most inhospitable regions on earth. Helping each other out is essential.

“I hunt for food for my family and for other people”

Kango doesn’t leave the hides unused. He mostly gives the skins of the seals he catches – around 50 in a good year – to his wife, Natsiq. She makes garments such as pants and hats from them for personal use or for the local market. Hunters can also sell hides to representatives of the government to be sold internationally – an extra source of income in an area of low employment and relatively high cost of living.

Kango learned his hunting skills from his father when his family still traveled around by dogsled. In modern Inuit life, he has the convenience of a snowmobile. At the Baffin Gas Bar, we fill up two for $120 – a hunting expedition doesn’t come cheap. Then we make a bumpy descent from the shore onto the ice of Frobisher Bay. On smooth ice, Kango accelerates to about 40 kilometers per hour. He quickly takes the lead and does not look back. 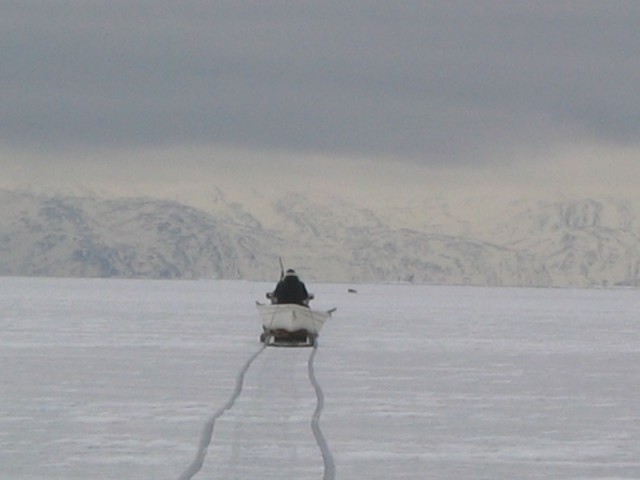 Hunter Kango approaches his prey, a seal on the ice.

After more than an hour, we reach the border of open water. The ice is bluer here, less covered with snow. Kango stops and takes out his binoculars. He peers into different directions. Then he motions that he has a seal in his sights, a dark spot on the ice in the distance.

In a wide curve, we head into the direction of the prey. With about 500 meters to go, Kango gestures that he wants to continue alone. Two snowmobiles make too much noise, even in low gear. He continues on slowly, then stops in the distance. He turns off the engine. He picks up his gun. He takes aim. It is dead silent, except for the occasional dull sound of the polar ice shifting, like a faint heartbeat.

Kango looks around and waves. We move on to the prey. The seal lies by a hole in the ice, about half a meter wide. It’s a dark ring seal. Blood is leaking onto the ice from a wound in its head. The bullet hole is in the back of its skull. It still has some spasms.

Kango stands by, ready with his hook. The ice around the hole is unsafe, he indicates, piercing it with the stick. He hooks the seal onto the pole and drags it to the rowing boat, leaving a trail of blood. The animal is dead. 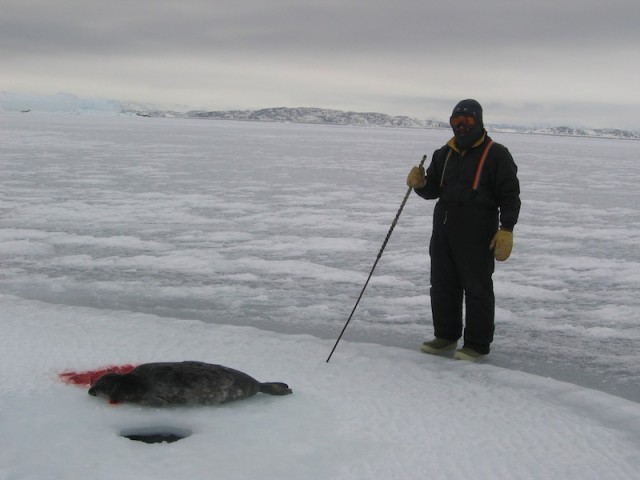 Hunter Joshua Kango with his prey. The seal had come through a hole in the ice.

“Food tonight,” Kango says with a laugh. Before leaving, he explained that many Inuit want to eat more traditional food instead of the expensive products from the south that are for sale in the supermarket, such as chicken, cereal, cookies and other sweets.

“When our people lived completely on food from the land, they were very healthy,” he said. “You never heard of diabetes or other diseases. Because of the different foods, there are illnesses now.”

On the return journey, Kango stops at a few lakes in the ice. By one of them, he topples the seal from the rowboat. He puts the body on its back and takes a knife. He cuts the animal open through the abdomen. A white layer of fat is exposed, the ‘blubber’.

Kango loosens the skin on both sides with the knife. When the hide is detached by a few inches, he grabs it and shakes the carcass out of it. He rinses the fur in the water. He cuts away the blubber and lays it in chunks on the snow. 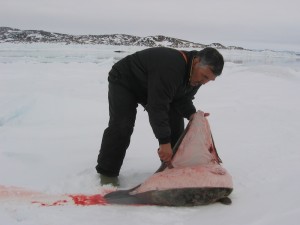 The skinned corpse is cut further to pieces. Intestines emerge, bathed in dark red blood. Kango puts the organs aside, he turns the guts into two braids. Between the rib cage, there is red meat. Kango cuts it to pieces, leans against his boat and takes a bite. He eats it raw.

“The seal hunt is very important for us,” he explains. “It gives us life, it helps our bodies.”

Kango puts the remainder of the food into a plastic bag to take home. He cleans up, only a red spot is left in the snow where he has processed the prey. In the distance, a raven is waiting to come and clean up the leftovers. The snowmobiles are turned on, the journey continues.