It’s the third period of a hockey game against the Montreal Canadiens when Eric Staal shoots and scores. The young star of the Carolina Hurricanes, the current champions in the National Hockey League, seizes the puck and shovels it accurately between the goalposts from several meters away. 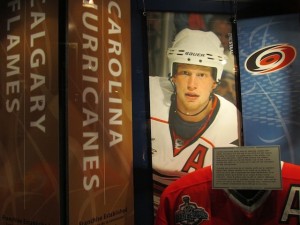 It is the 25th goal this season for Staal, a tall, 22-year-old Canadian of Dutch background. Together with two assists that have also yielded goals for the Stanley Cup holders, he has done his part for a 5-3 victory for the Hurricanes. It’s the way Staal, in his third year as a professional hockey player, earns his salary of $4 million with the team from Raleigh, North Carolina.

Perhaps equally important for Staal is that the goal has made him catch up to his younger brother Jordan (18). Jordan Staal is playing his rookie season with the Pittsburgh Penguins. He has impressed many with his performance. During a match this month against his childhood idols, the Toronto Maple Leafs, he scored three goals – the youngest player to date in the NHL to achieve a hat trick. He now has 25 goals to his name, the same number as brother Eric this season.

“It doesn’t surprise me,” Staal says in the locker room after a practice. “He’s a great player, he’s getting an opportunity to play some more minutes, you can see that he’s playing with more confidence.” Asked if he feels pressured by his brother, Eric chuckles. “Not really. I’m very proud of the way he’s playing. I want success for him and success for myself. So it’s a good time.”

Friendly but driven competition is typical for the Staal household. The rural Ontario family of Dutch descent is fast becoming an institution in professional hockey. In addition to Eric and Jordan, 20-year-old defenseman Marc Staal has already been contracted by another NHL team, the New York Rangers. He is currently still playing for the Sudbury Wolves, a minor league team in Ontario. The youngest of the Staal brothers, 16-year-old Jared, has started his ascent at that same club this year.

Indeed, the Staal family has been described as a potential ‘NHL dynasty’ by Sports Illustrated. “The Staal name is becoming a brand name in hockey”, says Luke DeCock, who covers the sport for the Raleigh News and Observer. “Some team will take a chance on Jared, just because he is a Staal.”

The Staal brothers became avid hockey players during the harsh winters in the remote city of Thunder Bay, Ontario. Their father, Henry Staal, a son of immigrants from the province of Drenthe in the Netherlands who immigrated to Canada in the 1950s, built an ice rink on the land of his farm where grass sods are cultivated from spring to autumn for lawns and golf courses. 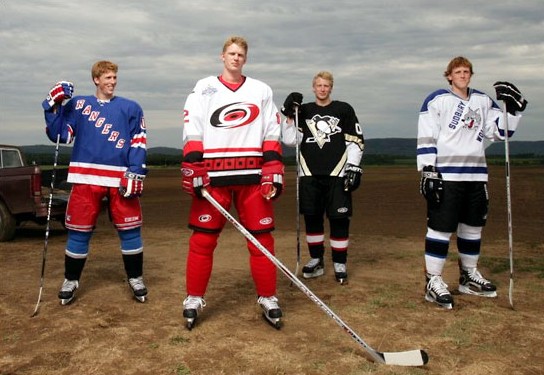 The Staal brothers, from left Marc, Eric, Jordan and Jared at the farm where they grew up. Photo KC Armstrong

“In wintertime we have more time on our hands, and I had to give the kids something to do,” says Henry, who grew up as a good Canadian: he watched hockey games on TV and learned to play the sport with his brothers.

It is not uncommon for Canadians to make a rink in the back yard, but the ice at the Staal farm was something else. “It was 60 by 100 feet, with boards around it,” says Henry. “And with lights, because in winter, it gets dark pretty early.”

The rink was an attraction. “We were out there all the time,” says Eric. “It kept us busy and out of the house with four boys. As soon as we got back from school we were out there right away, until my mom called us in for dinner.” Mother Linda Staal is a daughter of immigrants from the Dutch province of Overijssel.

Matches between the Staals were usually between Eric and Jared on one side, and Marc and Jordan on the other. “We were all competitive, we wanted to win,” says Eric. Still, the emphasis was on having fun, he says. “There were some sticks thrown and some slashes and stuff like that here and there, but in the end it was a lot of fun and we always enjoyed being out there. And you just learn, I think it helped us in the long run.”

“The Staal name is becoming a brand name in hockey”

Father Henry, who unlike his sons speaks some Dutch, started noticing that his sons were excelling on junior teams. “They were always among the better players on their teams.” He brought the boys to hockey training, but did not personally coach them. Both parents acted as facilitators, not as hard taskmasters who demand top performances from their kids. “They knew we all loved hockey, and they were supportive of us doing it,” says Eric, who dreamed of playing in the NHL from age 7.

Even now that his sons are leaving the homestead for professional hockey careers, Henry Staal is staying modest. “As parents, we want that things work out in terms of hockey – but we also want them to have fun with it and enjoy what they’re doing.”

At home, the Staal brothers learned to work hard. In summer, they worked long hours on the farm. “Eric shows up early and leaves late,” says journalist DeCock. “You can see what his parents taught him in everything he does.”

Eric points to the immigrant mentality of his Dutch grandparents as an inspiration. “They didn’t really have anything, they worked hard for what they got, and that was instilled in us as kids: work hard and you’ll be rewarded. We’re fortunate enough to be able to play in the NHL now.”

The Staals’ success is also due to their exceptional skills. “Eric is one of the most talented players in the league, extraordinarily valuable for the Hurricanes,” says DeCock. “He is a player who just really can’t be stopped, very strong when he has the puck on his stick, an excellent shooter.” 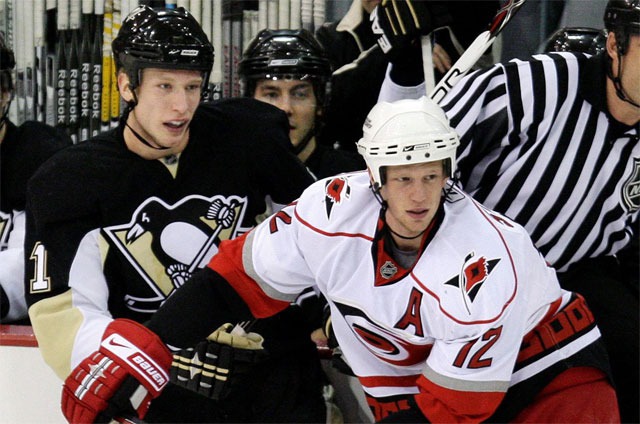 Jordan and Eric Staal in action in the NHL.

With his 1m95 and 93 kilograms, Eric is relatively slender compared to the older, tough players who check him; he has tall, Dutch looks. “He going to get bigger, and as that happens, he will become an even better player,” predicts DeCock.

At 1m95 and 98 kilograms, Jordan Staal is already bigger than Eric was at his age. “When he was scouted, he was physically head and shoulders above everybody else. As an 18-year-old, his physique looked like a man,” says Joe Sager, a hockey writer with the Pittsburgh Penguins. “You could just tell that he would develop into a real force of a player. Jordan has exceeded all expectations. He has a very intelligent style of play, he’s in the right places at the right times.”

Last fall, Eric and Jordan met professionally for the first time, when Carolina played Pittsburgh. They had a face-off in the third period. Eric won. “Seeing him across the ice in an NHL uniform was exciting for me,” he says. “He made it, and he’s playing in the same league as me, and I was very proud of him. But when the puck dropped, it was intense, we were trying to get the win.”

Highlight for the Staal family was the Stanley Cup victory by Eric and the Hurricanes last year. As customary, each player is allowed to take the cup home. Eric brought the Cup to Thunder Bay and threw a party at the farm. “To win the Stanley Cup is something you dream about, and happened for me already,” he says.

“When the puck dropped, we were both trying to get the win”

Father Henry was proud: “Since I was six years old, every spring I watched the Stanley Cup being raised. So to actually have my son winning it and bringing it home was pretty special.”

That was also true for Eric’s grandparents, all in their eighties. Henry Staal: “My dad and my father-in-law just love the game, they watched hockey their whole lives.” Both grandmothers have been cooking Dutch dishes for the boys since they were little, such as stamppot (potatoes mashed with vegetables), meat and boiled potatoes, and vegetable soup, or groentesoep.

“They love to go over on Sunday for oma’s vegetable soup,” says Henry, using the Dutch word for grandma. “That’s what put them over the top,” he says, laughing.

Nowadays, all four brothers are far from home. The ice rink in the yard is gone. But the family dream of the Staals is very much alive, says Eric: “We’re hoping obviously both the other ones will make their way into the NHL.”

Tagged with: Dutch in Canada • Hockey

In Hérouxville, women are not stoned or burned alive Seal hunt is life blood for Canada’s Inuit
Share