Because of growing oil production in Canada, the Canadian dollar is increasingly seen as a ‘petro currency’. The loonie rises with the oil price, causing the competitive position of Canada’s industrial exports sector to erode. As a result, the Canadian economy has been diagnosed with ‘Dutch disease’.

At first sight, high oil prices appear to be a boon for Canada. Oil production on the East Coast and on the western prairies is in full gear. Billions of dollars are invested in the tar sands of Alberta, a vast oil reserve that is difficult to exploit. Alberta is booming, cash is rolling in, and the province has annual growth figures that are about four times as high as the healthy Canadian average of about 3 per cent.

Still, Canadian economists are concerned. Because just as a barrel of crude oil becomes more expensive, so does the Canadian dollar. The currency, known as the loonie, has gained almost 4 per cent so far this year against the U.S. dollar (to 85 cents U.S.) and 14 per cent against the euro (to 71 eurocents). That’s beginning to cause problems for other sectors of the Canadian economy, particularly industrial production for the export market. In addition to rising energy costs, Canadian makers of car parts, textiles and other products have to deal with the fact that their products are becoming more expensive for foreign buyers.

Economists have a name for this phenomenon: Dutch disease. It refers to the situation in the Netherlands in the 1970s, when North Sea oil produced healthy revenues, but the guilder became unaffordable for foreign buyers of other Dutch products. As a result, the discovery of oil was not the blessing it initially appeared to be. 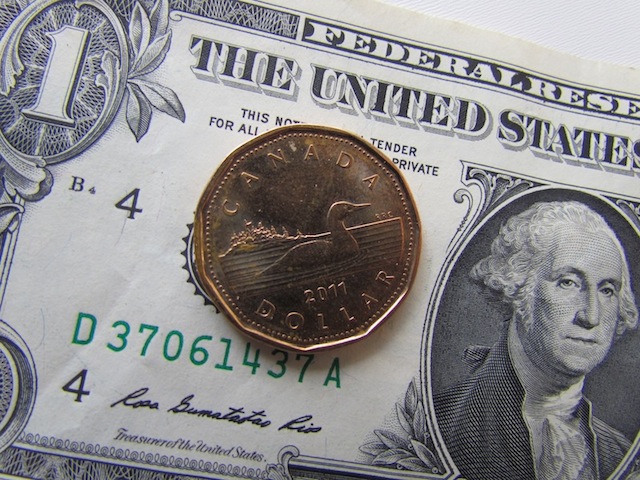 The U.S. dollar and the Canadian currency, nicknamed the ‘loonie’.

Canada now has clear symptoms of Dutch disease, says Stephen Poloz, an economist with Export Development Canada in Ottawa. “It is a risky environment,” he says. “The dollar is far above where it would be if oil prices were normal, and that’s higher than any of our models would suggest makes sense for the underlying competitiveness of manufacturers in particular. In the manufacturing sector you can see a lot of stress, and declining employment. You have a slowdown in some sectors and pretty solid growth in others. That’s a symptom of Dutch disease.”

According to Warren Lovely, economist with CIBC World Markets in Toronto, Canada will have to get used to the Canadian dollar being seen as a “petro currency”. He points out that energy accounts for 20 per cent of the total value of Canadian exports, a record high. “A key element in our view of the Canadian economy involves an energy trade surplus that’s going to continue to rise,” he says. “That leaves the Canadian dollar with room for further appreciation.”

The Canadian dollar is increasingly seen as a ‘petro currency’

The exchange rate of the Canadian dollar against the U.S. dollar matters most. The great majority of Canadian exports – 85 per cent – goes to the United States. Since the second half of the 1990s, Canadian exporters have been able to rely on a cheap Canadian dollar, which for a few years floated around the 65-cent mark. The Canadian economy has seen fairly strong growth rates for many years, often even outpacing the U.S. But now that the value of the dollar stands at 85 cents, manufacturers “see their competitive position erode,” says Lovely.

Producers of Canadian exports don’t see rising oil revenues as a boon for Canada. In the industrial sectors, about 100.000 jobs were lost in the past year, mostly in the provinces of Ontario and Quebec, which together account for 60 per cent of GDP. “Central Canada has an overwhelming reliance on the manufacturing sector, on non-resource manufacturing,” says Lovely. “That’s the area of the economy that we’re most concerned about.”

This regional imbalance presents a challenge to the central bank. According to the Bank of Canada, the Canadian economy is almost at full capacity. Stimulated by a boom in the domestic construction sector and other domestic consumption, unemployment is low (about 7 per cent). The bank fears inflation, driven by high oil prices, and has started a series of interest rate hikes. Last month, the key lending rate was raised for the second consecutive month by 0.25 percentage points, to 3 per cent. Further hikes are expected.

A side effect of this strategy is that the Canadian dollar becomes more attractive for foreign investors and appreciates – which exacerbates Dutch disease. According to Lovely of CIBC World Markets, the Bank wants to keep the currency from overshooting. “The Bank of Canada is quite aware of the currency’s impact on the economy, and they certainly don’t want to risk an unnecessary contraction,” he says. “There would be an increasing risk of a severe bout of Dutch disease were the Bank of Canada to continue to raise interest rates agressively.”

Poloz of Export Development Canada says that a short bout of Dutch disease can actually strengthen the Canadian economy. “Getting a little dose of Dutch disease instills a certain adjustment process in the economy which can ultimately end up looking positive,” he says. He predicts that the world economy will get used to tightness on the oil market and that the oil price will stabilize — and the Canadian dollar with it. “It just depends on how long that lasts.”

One Response to Canadian economy suffers from ‘Dutch disease’