Correspondent Frank Kuin > Canada & the US > The drones are coming

The drones are coming

Small drones are becoming increasingly popular for tasks ranging from inspection of hydro lines to spraying of crops. Critics warn of an airspace teeming with these unmanned aircraft. Join a test flight with Canadian drone maker Aeryon Labs.

A backpack zips open to reveal the components of a small drone: a cylinder-shaped body, rounded legs, stems with small rotor blades, and a square battery. “We’re going out flying,” says Ian McDonald, a vice-president with Aeryon Labs, a Canadian tech company that has supplied small drones to police forces, oil cleanup teams in the Gulf of Mexico, and the rebels in Libya. 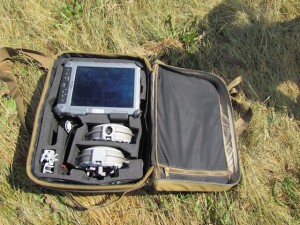 The Scout’s parts fit in a light backpack.

Quickly, McDonald snaps the legs and wings onto the body. The battery fits on top. A small round video camera, a movable electronic eye, is attached to the bottom. A tablet computer with a touch screen is powered up to pilot the drone, known as the Scout. Within minutes, the device weighing a couple of kilograms is ready for takeoff.

McDonald taps on the map on the screen to indicate where he wants the drone to go, and the Scout flies to the spot. A vertical slider is used to determine the altitude. Within no time, the small aircraft is hovering a few dozen meters above the ground, sending back detailed images of the industrial park, the field, and the pilot below.

“You can imagine that this is much easier than renting a helicopter,” says McDonald. He points to the benefits of having a quick view from above for police, firemen, search and rescue teams and inspectors of crops and hydroelectric lines. “The technology is at the stage of early adopters, just like smartphones a few years ago. But this market is ready for the mainstream.” 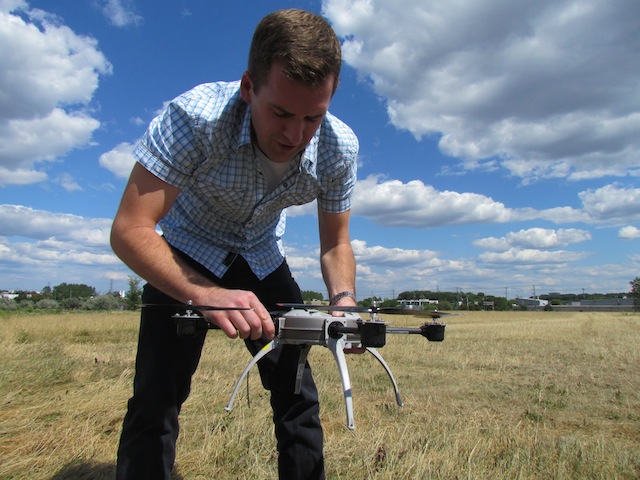 In other words: the drones are coming. Although the use of unmanned aerial vehicles (UAVs) is still restricted in many countries, observers are predicting that within a few years, the world’s airspace will be teeming with small drones with electronic eyes in the sky. In North America, it is estimated that within 10 years, some 30,000 unmanned aerial systems will be in use.

These aren’t the large, military drones that dominate international headlines, like the armed Predators and Reapers that are used by the U.S. military in the controversial campaign to bomb suspected terrorist targets in Afghanistan, Pakistan, and Yemen. Rather, the coming wave consists of small, light aircraft such as the Scout, Draganflyer, Qube and other models, which are relatively cheap and can be deployed with minimal training.

The interest in using drones for non-military purposes is growing fast, says Gretchen West of the Association for Unmanned Aerial Vehicle Systems International (AUVSI), a U.S. organization. “For years, the technology was primarily used by the military, but in recent years, civil markets have become really interested, such as law enforcement agencies, the departments of Homeland Security and Agriculture, and universities,” she says. “People are starting to notice the benefits of this technology.”

As drones have become more advanced and cheaper – full sets can be bought for a few tens of thousands of dollars; more advanced systems can cost up to $250,000 – their use is becoming increasingly attractive for missions that are ‘dangerous, difficult or dull’ for manned aircraft, in the lingo of the sector. Examples include keeping track of forest fires, searching for missing hikers, inspection of oil pipelines and the spraying of crops. Other applications vary from surveillance to commercial use for photography of real estate and even the production of Hollywood movies.

“It’s a very useful tool,” says Dave Banks, a detective with Halton Regional Police near Toronto, who has been working with a small drone for over a year to photograph crime scenes and look for missing persons, among other things. “Helicopters cost a lot more money, whereas the UAV can be up and running in minutes. I know in North America, the skies are just about ready to open to public services. I don’t see why every police service couldn’t have one eventually.”

Others do see such reasons. Critics are worried about the prospect of swarms of drones that hover around, spraying, measuring and filming, and keeping a watchful electronic eye in the sky. They say rules are urgently required to avoid deadly accidents and abuse. Concerns are focused on two main areas: air traffic safety and privacy violations by cameras in the air.

As for safety, some fear that unmanned aircraft can collide with planes with people on board. “There’s a very real danger of too many of those things flying around, so there will have to be some rules,” says Douglas Marshall, a professor at New Mexico State University and a member of a commission in the U.S. that is drafting rules and standards. The difficulty, he says, is that drones don’t have the capacity to instinctively avoid other objects in the sky.

In the U.S., the Federal Aviation Administration generally does not yet recognize unmanned aircraft because by definition they don’t meet the safety standards that are in force for manned planes. For that reason, they cannot be flown in the U.S. However, special permits have been granted to about 300 organizations, mainly police forces and research groups. Since this spring, police and fire departments can get fast track approval.

Moreover, Congress has mandated the FAA to develop rules to facilitate the general use of drones starting in September of 2015. Recently, draft rules have been presented to allow the use of drones on a limited basis: they cannot weigh more than 55 pounds (25 kilograms) or fly higher than 400 feet (122 meters). They must always stay within the line of sight of the pilot, and stay away from airports. Users must obtain a license and submit a flight plan.

Perhaps equally thorny is the issue of privacy. Opponents of large-scale use of drones by police forces, including the American Civil Liberties Union (ACLU), warn of a scenario where the government, like Big Brother, literally hangs over people’s heads with the capacity to keep an eye on them for long periods of time, even in their own backyards or through the windows of their homes. Not to mention the tricks paparazzi could pull off with drones.

Conservative commentator Charles Krauthammer has called for a ban on the use of drones within the U.S. “Drones are instruments of war,” he said on Fox News Channel. “They should be used in Somalia to hunt the bad guys, but not in America. We don’t want a society where you’re always being watched by the government.” 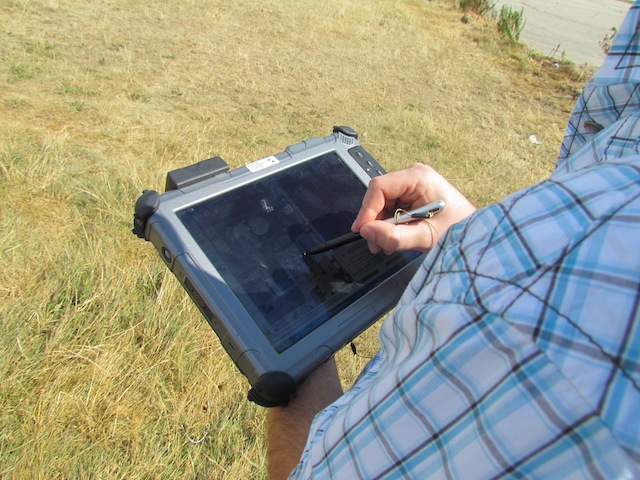 The person piloting the Scout points at a place on the map, and the Scouts goes there.

Detective Banks of Halton Regional Police thinks such fears are exaggerated, because of the rules. “We have to keep the unit in visible sight all the time, and at night it has to have lights on it. So it is not really a useful surveillance tool to look at anybody. We would have to obtain legal permission before we did anything like that.”

Still, there is already a legal test case: police in North Dakota called in a drone last year to spy on a man who was suspected of stealing cattle and building a barricade on his land to resist possible arrest. Using information from the drone, police were able to take the man into custody without a firefight. But he wants to challenge the charges against him in court because of the method used.

West of the drone organization says there are already laws against spying, and the use of unmanned aerial vehicles will change little. Nevertheless, she acknowledges drones have a negative reputation that AUVSI feels should be rectified. The organization has launched a code of conduct for users of drones. “It will take a public awareness campaign to educate the public about the benefits of these systems, so that the general public knows it doesn’t need to be scared of this technology at all.”

In the Waterloo field, the Scout hums as it comes in for landing. McDonald believes in the benefits of small drones; the rebels in Libya used one for reconnaissance during their advance on Tripoli last year. The craft has also been used in the Gulf of Mexico to locate oil slicks. “It allows you to keep people out of dangerous situations,” he argues. “We expect to see a real acceleration in the civilian marketplace.”