Rising world demand for food has put a spotlight on potash, a key ingredient of agricultural fertilizer. Market leader Potash Corp. remains in Canadian hands after a failed takeover bid. Although potash doesn’t have the universal visibility of oil, it is an essential source of energy. Join a tour of an underground potash mine.

By Frank Kuin in Allan, Saskatchewan

A kilometer-long elevator shaft descends into an enormous underground mine in the Canadian province of Saskatchewan. Here, deep under the Canadian prairie, miners of Potash Corporation extract a crucial nutrient for agricultural production throughout the world. They work overtime to meet the growing international demand for potash – a key resource in fighting the global shortage of food.

It takes 3.5 minutes to ride the industrial elevator to the bottom. Then, the journey continues by jeep, through an underground maze of long, dark corridors lit only by headlights. After a twelve kilometer drive in bone-dry heat with salty dust in the air, a brightly lit work station looms, equipped with a giant bore. With deafening noise, it is slowly drilling a path into the light red mineral wall.

“The pink stuff you see is basically potash,” shouts Phil Gauer, Operations Superintendent at the Allan Mine, over the noise. “The bore delivers 500 to 600 tons per hour. There are seven bores in production at different locations around the mine. We mine an 11 foot high strip, because it’s the highest grade.”

It is hard to imagine, but the resource extracted from the earth’s crust by miners here will help provide food to millions of people on the other side of the world. Farmers in China, India, Southeast Asia, South America and elsewhere use the nutrient from the Canadian soil, processed into fertilizer, to enrich the depleted agricultural land in their regions, in order to significantly boost the crop yield – sometimes by 50 per cent or more.

Operations Superintendent Phil Gauer explains the extraction process in the potash mine.

Such boosts are badly needed to help food supplies keep pace with the rapidly growing world population. According to United Nations estimates, the global population will rise from 6.8 billion people now to 9 billion by 2050. Food production should rise by 70 per cent in that period. The key to such substantial increases in agricultural output is the addition to the soil of crucial nutrients like potash.

For this reason, potash has grown in the last five years from a virtually unknown, dull ingredient of fertilizer to one of the more coveted commodities on earth. Potash producers have become lucrative star enterprises of the mining world after years of anonymity.

“Potash has been a bit of a sleeper because it doesn’t have the glamour or the universal visibility that a commodity like crude oil might have,” says Jeff Schoenau, a professor in soil science at the University of Saskatchewan. “But it is every bit as essential to humankind. Fertilizer is an energy source, like gasoline.”

The new international recognition of potash as an indispensible fuel for global development, prompted by the international food crisis of 2007 and 2008, has led to considerable growing pains in the potash industry. After decades of operating mostly unnoticed, primarily in Canada and Russia, the sector has in recent years lived through wild price fluctuations, consolidation, a hostile takeover bid for Potash Corporation, and billions of dollars in investments to increase production in the coming years.

In 2008, demand for potash ran so high that the price skyrocketed, from about $200 per ton to $1,000. The market value of potash producers also rose: Potash Corporation briefly became Canada’s largest company by market capitalization; its share price, which until 2007 had rarely topped $10, reached a staggering value of $240.

However, the highly inflated price of potash led to a sharp hog cycle: farmers could not afford fertilizer and postponed purchases. In 2009, the price plummeted to about $300 per ton. Shares of potash producers also fell, partly due to the financial crisis – prompting mining giant BHP Billiton to seek entry into the promising potash sector by trying to swallow up Potash Corporation for a friendly price. The proposed acquisition, valued at $39 billion, would at once have made BHP the market leader in the sector.

The hostile takeover bid was blocked by the Canadian government after a fierce campaign by Potash Corporation and the provincial government of Saskatchewan. BHP wanted to scoop up a “strategic reserve”, argued the province, which is dependent on the potash industry for a large portion of its revenues.

Deep in the mine, chunks of rock that have been excavated by the giant drill are transported by a screeching conveyor belt back to the shaft, twelve kilometers back. The raw material is hauled to the surface there, for processing in an onsite plant – a smelly chemical process whereby potassium chloride is separated from the soil’s salt (sodium chloride).

The end product is pure potash, stored in mounds of clean pellets. Long freight trains are ready to carry it away to world markets.

It is hard to keep up with demand, says Larry Long, General Manager at the Allen Mine. “Countries all over the world are using our product at a higher rate, so we’re in a position where we had to expand to meet the demand. These are very exciting times in potash.” 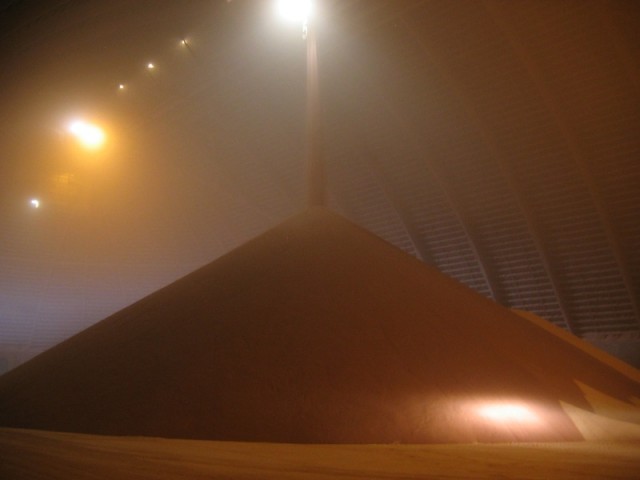 A mound of potash in a storage facility of Potash Corp. in Saskatchewan.