Education is crucial for the reconstruction of Haiti, says Michaëlle Jean, UNESCO Special Envoy for Haiti. In her new role, the former Governor-General of Canada is “carrying out a crusade” for her country of birth, the poorest country in the Western Hemisphere that was hit by a devastating earthquake in 2010.

The election of Michel Martelly as President of Haiti is an opportunity to refocus the reconstruction following the devastating earthquake of 2010, says Michaëlle Jean, Special Envoy for Haiti with UNESCO, the United Nations Educational, Scientific and Cultural Organization.

Although some have voiced concerns about Martelly’s lack of experience in government, the former pop singer is a “symbol of the change that the Haitian people want to see happening,” says Jean, a former Governor-General of Canada.

“People could connect to Martelly’s personality, they responded to the man he is as an artist. People could relate to his songs and his words. Now he has to go from words to actions, as a leader, as head of state of the country. He has come a long way, and I’m sure there are question marks, even for himself.”

Jean, who at 53 is of the same generation as Martelly, knows a thing or two about an unlikely rise to a top job. Born in Haiti, she moved with her parents and sister to Canada at age 10, fleeing the regime of the dictator François ‘Papa Doc’ Duvalier. After a career as a documentary filmmaker with the French-language public broadcaster Radio-Canada, she was named Governor-General of Canada in 2005 by Prime Minister Paul Martin.

The largely ceremonial function to serve as the representative of Canada’s head of state, Queen Elizabeth II, yielded Jean huge prominence, not just in Canada, but also in Haiti. During two visits to her country of birth, she was welcomed by the people of Haiti as a source of inspiration, the first time shortly after being sworn in and again following the earthquake. 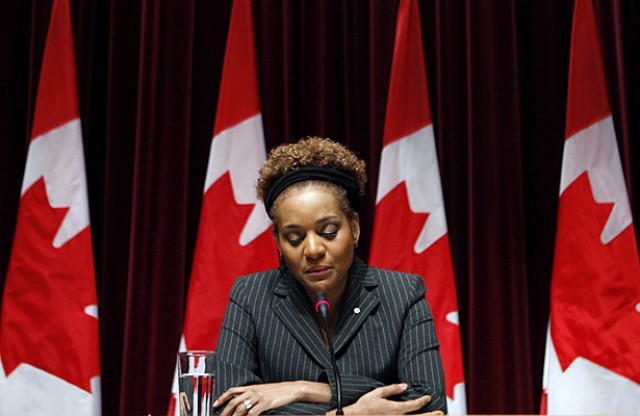 Canada’s Governor-General Michaëlle Jean during a statement on the devastating earthquake in Haïti, her country of birth. Foto Reuters

She often called attention to Haiti in her meetings with foreign leaders during state visits, perhaps most notably with  U.S. President Barack Obama when he came to the Canadian capital, Ottawa, shortly after his inauguration.

After her term as Governor-General ended last year, Jean was appointed UNESCO special envoy for Haiti. In that role, she has committed herself to the advancement of education, which has been severely damaged in the disaster. An estimated 500,000 children are unable to go to school, and there is a need for 10,000 teachers. There is a national plan for the development of public education, which Jean considers the “key” to reconstruction.

Jean, who was deeply shaken by the disaster in her native country, wants to commit her influence and international connections in her new position to keep Haiti in the international limelight. “My role is about carrying out a real crusade for Haiti’s reconstruction.”

I spoke with Michaëlle Jean at her office in Ottawa.

What do you think of the election result?

“Like everyone else, I was really looking forward to the end of the electoral process. Following the earthquake, a decision was made to keep the electoral agenda on. The whole process of engaging in this political battle really slowed down the reconstruction efforts. Now that it’s completed, I think it’s time for actions.”

Is Mr. Martelly the right person to lead those actions? He has no experience in government.

“He himself is very humble about his experience. But he is certainly aware of what he represents. People have massively voted for him because they see him as a symbol of change. He wants to create hope, and we will have to see how he will do that. We need to see who will surround him, who will be his advisers and his team to govern.”

What will you discuss when you’re speaking with him?

“When I first had an opportunity to meet Mr. Martelly, before the second round of the election, the focus was on education. He made it an important part of his program and saw it as a priority. So I look forward to sitting down with Mr. Martelly as president of the Republic, to see how UNESCO can support the implementation of the national plan of education that was prepared by a task force before the earthquake.

“There are many offers coming from multilateral organizations, countries, governments, and NGOs, who all want to be involved in training teachers, in vocational schools, in building schools. But there must be something more coordinated. And this coordination has to come from the government.”

Is developing the education system possible without first providing for other primary needs, such as security?

“Education is at the top of the Haitian people’s priorities. Even in the time of slavery, the slaves knew perfectly well that they were deprived of access to knowledge and access to education. In Haitians’ minds, there has always been a relation between education and emancipation. So this national plan for education in Haiti is probably one element of total consensus in the country. Haiti is a state of emergency, but there will never be any sustainable development without a serious investment in education. And people know that.”

What are your own recollections of going to school in Haiti?

“I am a special case, because my parents were in the resistance. I was born under the Duvalier regime, the father’s, ‘Papa Doc’. My parents refused to see their children going to schools where they had to salute the dictator every morning with their arm up. So my mother, who was a teacher, kept me at home and taught me. My father was the dean of a college, and he was arrested and tortured because he refused to send his students to a demonstration in favour of the dictator. He was well-known for his views against this dictatorship.”

“So the first time I went to school, to a conventional school was when I arrived here in Canada with my parents as political refugees.”

Jean-Claude Duvalier, also known as ‘Baby Doc’, who continued the dictatorship of his father from 1971 to 1986, returned to Haiti this year after living in exile in France. Can he be persecuted in Haiti?

“There are people who have filed complaints against Jean-Claude Duvalier. He cannot leave the country. A lot of people who were victims of his regime are asking for justice. And I think that he will need to answer for the actions and everything that was done under his regime during his 15 years in power.”

Former president Jean-Bertrand Aristide also returned to Haiti recently, after living in exile in South Africa. He is presenting himself as a champion for education. Do you see a role for him?

“We don’t know if he will continue to stay at a distance politically, or if he’ll want to reactivate his political activities. But you know what? Haiti needs serenity. The Haitian people need stability. I think it would be totally irresponsible to destabilize the country. There’s a great need for dialogue and to build the rule of law. There’s a need for a serious fight against impunity in that country. Impunity cannot continue as a way of doing things and letting injustices really affect the lives of people.

“I support the call for a national truth and reconciliation commission, where questions could be asked of all former leaders of Haiti. And I think that Mr. Aristide, like Jean-Claude Duvalier, will have to be accountable to the people and respond to the questions about their actions during their tenure.”

Aren’t the expectations of a new generation of Haitian leaders, including Mr. Martelly and yourself, too high?

“You know, this is also something. I think in Haiti people are starting to realize that there cannot be a providential man or woman that has the truth and all the solutions. The solutions come from the people, they have to be included. It comes from the idea of national unity, working together, and including everyone, and making sure that there’s a sense of the greater good.”

Does that mean a reduced dependence on foreign aid?

“It’s not working. It hasn’t delivered anything sustainable. The logic of assistance has only created more dependency. I think the international community needs to reflect upon working differently: investing more than giving, accompanying and supporting the Haitian leadership. At the same time, on the Haitian part there must be a greater demonstration of responsibility and of the greater good.”