Everyone saves face at G20 in Toronto

World leaders of the G20 have agreed to reduce budget deficits at their summit in Toronto – but not at any price. The Americans and the Europeans both got what they wanted at the meeting: a delicate mix of austerity and stimulus.

All participants of the G20 summit in Toronto can go home feeling relieved. On the surface, world leaders of the group of developed and emerging economies appear to have maintained unity by agreeing when their books must be balanced.

In the final communiqué, member countries of the G20, which together represent about 85 per cent of the world economy, have pledged to reduce their budget deficits by at least half between now and 2013. As of 2016, they should be in a position to start paying down their sovereign debts.

According to the summit’s host, Canadian Prime Minister Stephen Harper, the document shows that the G20 countries agree on the ultimate goal: to promote global economic growth. “All leaders recognized that fiscal consolidation is not an end in itself. There will be a continued role for ongoing stimulus in the short term.”

Still, the agreement on deficit reduction is hardly a big breakthrough. Most European countries, cornered by the European debt crisis, have already announced austerity plans to reduce their deficits. Canada, the host country, wants to cut its deficit by half next year. In the United States, President Barack Obama when he took office in January 2009 pledged to reduce the U.S. budget deficit in half by 2012. No one has had to renege on previously stated fiscal policy goals.

That means the U.S. is the informal loser at the summit. In the run-up to the meeting, Washington tried to persuade countries with export surpluses, notably Germany, not to cut too deep too quickly. The Obama administration fears that a drastic change in direction will endanger the faltering recovery. But the Germans are free to promote austerity, just like the Americans are free to promote stimulus, provided they have their fiscal houses in order by 2016.

Since the start of the global economic crisis in the fall of 2008, G20 countries have agreed on stimulus measures at their summit meetings in Washington, London, and Pittsburgh. It was that consensus that vaulted the G20 into a position as the leading forum for international economic policy.

But in letters and op-ed articles in newspapers in the run-up to Toronto, world leaders and finance ministers showed disagreement about the timing of a shift in policy from stimulus to austerity.

“Leading up to the summit, there was some sense of a divide,” President Obama acknowledged yesterday after the meeting. But, he said, “Keep in mind that we had already proposed a long time ago that we were going to cut our deficits in half by 2013. And so the time frame and the measures that have been adopted are consistent with our view that it is important for us to make sure that in the medium and long term, we are paying attention to the big deficits and debts that we have out there.” 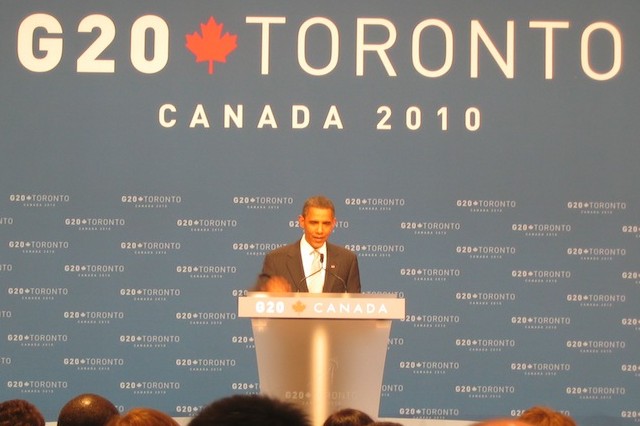 President Obama during his press conference at the conclusion of the G20 summit in Toronto.

However, Obama said, “What we did say coming to this conference is we can’t all rush to the exits at the same time.” Although the overall aim of the G20 remains the same – to promote global economic growth – the means are diverging, he acknowledged. “Every economy is unique, and every country will chart its own unique course.” There are no sanctions for any breaches of the deal.

That delicate balance was reflected in the summit’s communiqué. “There is a risk that synchronized fiscal adjustment across several major economies could adversely impact the recovery,” it reads. “There is also a risk that the failure to implement consolidation where necessary would undermine confidence and hamper growth.”

Unity in the G20 has also been put under pressure by a debate about tightening financial supervision. The G20 countries have not been able to agree on a common approach to proposed bank levies to pay for potential future bailouts. Several European countries and the U.S. want banks to contribute to a fund that can be used when one of them is likely to fail, so that tax payers are off the hook if a rescue is needed. They advocated international cooperation in that area.

Canada, where no bank bailouts were needed during the financial crisis, is strongly opposed to an international bank levy. Such a tax would force banks that conduct themselves properly to pay for the rescue of institutions that take irresponsible risks, is the argument. Countries like China, Russia, India and Australia agree with the Canadian position. Harper said yesterday that “the issue of bank taxes has been left to individual countries.”

It has been agreed, however, that capital requirements for banks will be increased, so that they should be able to withstand a future crisis without government aid. The details of that agreement will be worked out at the next G20 summit, in the South Korean capital Seoul in November. 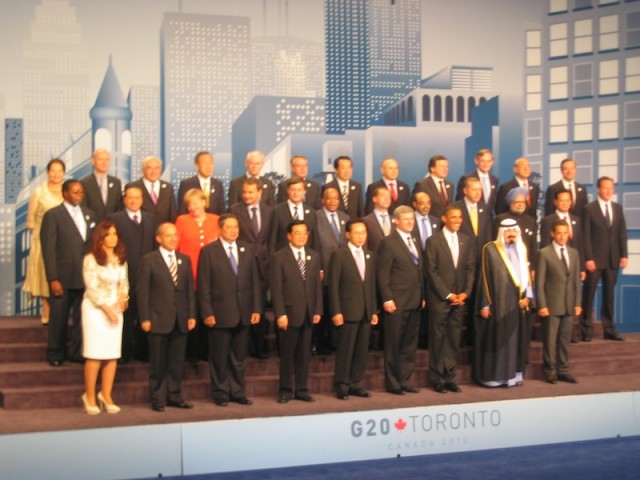 The summit in Toronto, which cost $1.1 billion (Canadian) partly because of a large-scale security operation, was disrupted all weekend by demonstrations by thousands of people. Rioters broke shop windows and set a police car on fire. Over 600 people were arrested.