Downtown Toronto is a fortress for G20

World leaders of the G20 are meeting in Canada this weekend to talk about solutions to the economic crisis. Toronto, the financial heart of Canada, came through the crisis relatively well. Now it’s a fortress for the summit meeting. In the city’s banking district, skepticism prevails.

A three meter high fence on a concrete base runs through the financial district of downtown Toronto, where the G20 leaders’ summit will be held this weekend. Policemen are at every corner in the city centre, with its towering head offices of the major Canadian banks. Cameras have been put on lampposts, security guards in dark cars look on. There are large ‘road closed’ signs everywhere.

For a Friday morning, it is ominously silent in the business district, a stone’s throw from the convention centre where world leaders will meet today and tomorrow. Usually, tens of thousands of bank employees rush along the streets here with BlackBerrys and Starbucks coffee. But today, the banks have told most of their people to stay at home, or to work at locations outside the city because of the large security operation downtown. Toronto is a fortress, concerned about protesters and terrorists.

“It’s stupid,” says Brad, an employee of Toronto-Dominion Bank who does not want to give his last name. He has been advised not to wear a suit, so as to not become a target for potential demonstrators with a grudge against the banking industry. The LED sign on the corner of King and Bay Street, which normally displays Toronto Stock Exchange share prices, has been boarded up. “To shut down the downtown core for this goes too far,” he says. “They should have held the summit somewhere else, where security is easier.” 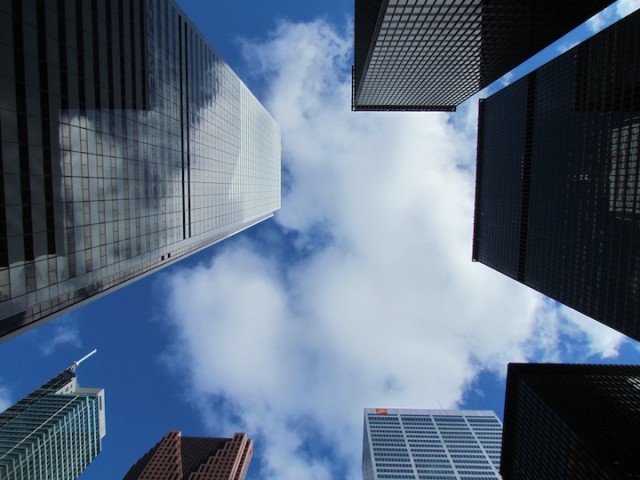 Skepticism prevails in Toronto over the summit of the G20, the group of large developed and emerging economies. Many question the state of siege that has for all intents and purposes been proclaimed. The price tag for the meeting has ballooned to $1.1 billion, partly because of a staggering security bill – much higher than the costs of previous summits, and a remarkable expense at a time when budget deficits have fallen out of favour.

What do Canadian tax payers get for their investment? A two-day meeting of a relatively new, poorly defined group of countries, with little chance of agreement on the key issues on the agenda:

The bank levy in particular is a sensitive issue in the host city of Toronto. The Canadian government has been opposed to international rules about bank levies, an idea that has been embraced by the United States and most European countries, including Germany, France and the U.K. They want banks to contribute to a fund that can be used when one of them is at risk of failing to spare tax payers when a bailout is needed. The idea of a global bank tax to prevent future banking crises was until recently gathering steam.

But consensus is hard to find at the G20, which is attended by about 25 countries. Canada, a country that steered clear of bank bailouts during the financial crisis, is strongly opposed to a uniform bank levy. Such a tax would force banks that conduct themselves properly to pay for the rescue of institutions that take irresponsible risks is the argument. Countries like China, Russia, India and Australia agree with the Canadian position.

Although the idea of an international bank levy was rejected earlier this month at a meeting of G20 finance ministers in South Korea, it is still alive. The British announcement of a bank levy led to a call by British banks this week to coordinate bank taxes internationally. The German finance minister, Wolfgang Schäuble, yesterday also called for coordination. “But if, after Toronto, we realise it cannot be done on a global scale, then we will do it for ourselves in Europe,” he said.

In Toronto, the ‘Big Five’ Canadian banks argue that stricter capital requirements and better supervision on compliance are the success formula to prevent banks from failing. “What is important is stability in the financial sector and good risk management, which you do not get by imposing a tax on financial institutions,” said Nancy Hughes-Anthony, president of the Canadian Bankers Association. “We hope that the upcoming G20 meeting will focus on developing effective, even-handed regulations that will prevent a repeat of the global financial crisis.”