The seal hunt is under pressure because of the threat of a European import ban. Fishing villages on Canada’s East Coast are ailing due to the collapse of the fur trade. “We don’t hunt for nothing, there’s a reason for it.”

Large batches of dripping seal pelts are hoisted from the hold of the fishing boat of Tony Gould, an experienced fisher and seal hunter from Newfoundland, on Canada’s East coast.

For six days, Gould and four crewmen have been out hunting in the northern Gulf of St. Lawrence – a harrowing expedition yielding 335 skins. In Port au Choix, an old fishery town, workers in rubber overalls attach the pelts to a hook below deck, about 25 at a time. The pelts are loaded into containers on the dock, destined for a buyer.

Gould, a good-humoured Newfoundlander with a thick accent, is worried about the future of the Canadian seal hunt. It has been a source of income for him for more than 40 years, but, he says, matter-of-factly, “the way it’s looking, this could be the last.”

Prices for seal pelts are very low: $15 for the best skins. In recent years it’s been around $40, even up to $100 at the peak. “Until this year, there was good money in it,” says Gould. “This year it looks like we’re hardly getting enough to pay for expenses.” Costs of fuel, bullets and groceries add up to more than $5,000.”

Asked why he still went hunting, Gould defends his occupation. “We should keep the fur business going for another year,” he says, while federal inspectors are checking his hunting rifles and draw up a log. “It’s in our blood; you’ve got to go out.”

In previous years, the seal hunt often provided Gould with a quarter of his annual income, but those days are gone. He doesn’t expect a quick recovery. “It has to do with foreign market conditions. Everything is against you in the seal hunt.” 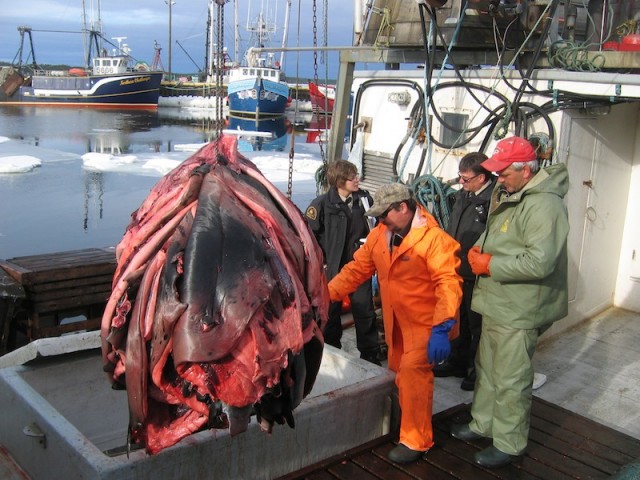 A batch of seal pelts is hoisted from the hold of Tony Gould’s fishing boat in Port Au Choix, Newfoundland.

Like the world economy, the Canadian trade in seal fur is in decline. The Canadian government has given permission for a cull of more than 338,000 seals this spring (43,000 more than last year), but it is uncertain if that quota will be met. The price of seal pelts is under double pressure: demand for the luxury commodity is suffering from the recession, and the threat of a trade ban by the European Union is also depressing the market.

Some European countries, including Belgium and the Netherlands, have already banned the importation of seal pelts. If the entire EU follows suit, markets in Russia and the Far East are also threatened, because fur products are shipped through European ports.

“The Europeans talking about banning seal products causes great uncertainty,” says Mark Small, sealer and president of the Northeast Coast Sealers Co-op, a buyer of pelts in Newfoundland. “It has a big impact on the price. The downturn of the sealing markets is devastating for communities along the coast.”

“Downturn of sealing markets is devastating for communities along the coast”

Those communities have been in economic decline since the cod fishery was halted in the 1990s because of overfishing. Towns such as Port au Choix now depend on other fisheries and tourism. Local companies in the remote and picturesque town, like a car repair shop and a hardware store, are sitting empty.

Many fishers in the region don’t bother going hunting for $15 a pelt. Just outside Port au Choix, Roy Gaslard is preparing his boat for crab fishing. The bay is still full of ice. “I was planning to go seal hunting, but prices have gone so low that I’ve called my crew off,” says Gaslard, a fisher with 49 years of experience in the seal hunt.

This year is only the second in Gaslard’s seal hunting career that he hasn’t gone out. “We wouldn’t make much money. I hope to bring in some dollars with crabs this spring, and lobster this summer. But I would have done that anyway, it’s not a replacement. We’ll miss the seal hunt, because it helps to pay the bills in spring.”

There are about 7,000 seal hunters on Canada’s east coast. Last year, they killed just over 218,000 animals, whose pelts generated about $7m (on average $32 per pelt). The entire seal fur industry in Canada was worth an estimated $15m last year.

That’s not a fortune — but because of the historic importance of the hunt, and the lack of economic alternatives in the region, the Canadian government is determined to defend the controversial hunt. Ottawa has threatened to file a complaint with the World Trade Organization if the EU presses ahead with its ban.

“The seal hunt is a legal activity,” says Phil Jenkins, a spokesperson with Canada’s Department of Fisheries and Oceans. “Our position is that it’s humane, sustainable, and well-managed. If the livelihoods of people who are engaged in the activity are threatened by trade bans, a country should stand up for them. It’s a matter of principle.”

Animal rights groups disagree. “It’s irresponsible to keep propping up an industry that’s in economic decline and doesn’t really have a future,’’ argues Sheryl Fink, Senior Researcher with the International Fund for Animal Welfare (IFAW). “Instead of spending our taxes trying to keep alive an industry that really should have ended a long time ago, it would be better to try and find an alternative that stands a chance in the 21st century.”

For fishers in Port au Choix, that’s easier said than done. Fintan Dobbin, a jovial Newfoundlander in his sixties who grew up in the town, sits behind the wheel of his docked fishing vessel, ready to offload pelts. For six days, he has been out at sea, with four men. They hunted for seals with rifles and so-called hakapiks (clubs with hooks): a shot, followed by a hit with the club if the animal is not dead. One of his men almost drowned when he fell through the ice. It’s all in a day’s work in Newfoundland.

“We do what we can to survive and bring in some income,” says Dobbin, who has hunted since the age of 13. “I can’t see us doing anything else. This is our livelihood, the way we were brought up. We never got rich, but we earned an honest dollar.” Dobbin resents the animal rights groups; in his view they turn the world upside down. “They’re defending the rich by robbing the poor. We don’t hunt for nothing, there’s a reason for it.”

Slowly, batches of pelts are lifted from the hold of Dobbin’s boat; he has a total of 423 on board. The truck on the dock is filling up; seven vessels are being offloaded on this day. Dobbin is planning to go hunting again. “Hopefully I’ll break even this time, and make some money on the second trip. We don’t want to sit still on shore; we all want to make a few bucks.” 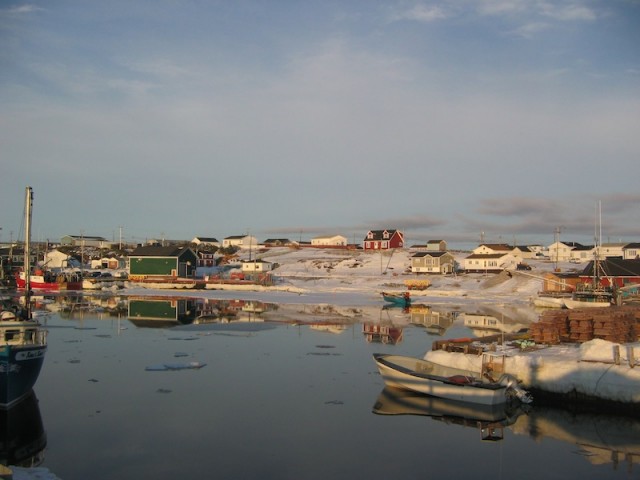 The commercial seal hunt in Canada has been described as the largest slaughter of marine mammals in the world. In an attempt to stave off a European trade ban, Canada has this year mandated a ‘three step process’ for killing seals:

1. Stun: hunters must strive to kill the prey with one bullet or hit;

2. Check: they must physically feel the skull of the animal to ensure it’s crushed;

3. Bleed: hunters must cut the arteries of the seal and let it bleed for at least a minute before skinning.

This process, meant to make the hunt as humane as possible, has been recommended by a group of independent veterinarians. Canada has a small army of fishery inspectors to enforce the rules and quotas.

Animal rights group IFAW agrees with the three steps, but says that in practice, it often doesn’t work. “It is very difficult to enforce and monitor,” says Sheryl Fink. “The hunt takes place far offshore, in an area of over 200,000 square kilometers. It’s impossible to regulate.”

Hunter Fintan Dobbin says he follows the regulations. “We go along with what they say, it’s no hindrance to us.”

Canada sets the annual quota on the basis of the seal population. There are an estimated 5.5 million seals on Canada’s east coast. Seals are not an endangered species.