A large trial began yesterday in Vancouver of a pig farmer who is alleged to have murdered dozens of street prostitutes. The women vanished from the city’s rough Downtown Eastside neighbourhood. For years, nothing was done about the disappearances.

Ernie Crey has had to wait a long time for a chance at justice – and a possible answer to questions about what happened to his younger sister Dawn. More than six years ago, Crey learned that Dawn, a prostitute in Vancouver, had disappeared without a trace. Her name was added to a list of dozens of street prostitutes who had gone missing from Vancouver’s Downtown Eastside, the poorest neighbourhood in Canada.

Yesterday, a trial began for the alleged killer of Dawn and dozens of other women: Robert William Pickton, a 57-year-old pig farmer from Port Coquitlam, a remote suburb of the city. Pickton was arrested five years ago.

Dawn Crey was a member of the indigenous Sto:lo population in the western province of British Columbia. She was 42 years old when she stopped showing up for appointments with a doctor in the Downtown Eastside who treated patients with methadone for addiction to heroin and other street drugs, Crey says. She also stopped collecting her welfare.

Crey soon suspected that his sister had fallen prey to a serial killer who was rumoured to roam the Downtown Eastside, a rough neighbourhood where addicts use drugs openly in alleys behind trash containers. It was known locally that drug-addicted prostitutes had gone missing from the area for years. But a thorough police investigation had never been launched.

That changed in February, 2002, when the RCMP in Port Coquitlam, a bedroom community east of Vancouver, arrested Pickton and linked him to the disappearance of dozens of women from the Downtown Eastside, most of them between 1995 and 2001. In all, there are 66 women on a list of missing persons. 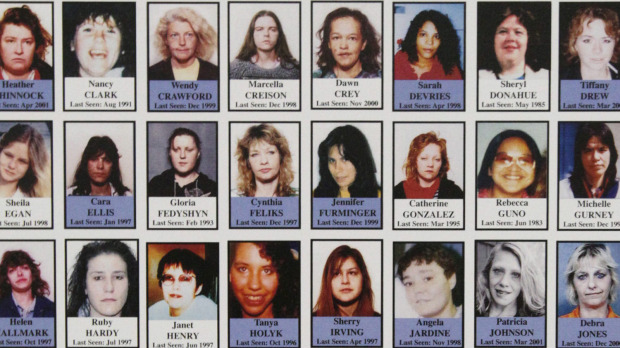 Some of the women who went missing from Vancouver’s Downtown Eastside.

Pickton has been charged with murdering 26 of the missing women. But he is initially on trial for murder of six of them: Sereena Abotsway (30 when she disappeared), Marnie Frey (25), Andrea Joesbury (22), Georgina Papin (35), Mona Wilson (26) and Brenda Wolfe (30). They all worked the street, and went missing between 1998 and 2001.

Remains of the women were found when forensic investigators combed Pickton’s land and ramshackle farm during an 18-month inquest. About 200,000 pieces of evidence were collected during that search, ranging from body parts and firearms to miniscule pieces of human bone.

If Pickton is found guilty, he would be the worst serial killer in Canadian history, and one of the deadliest in North America. He would face life in prison. But a conviction is not expected soon. The trial, the most expensive Canada has ever seen, is predicted to take at least a year.

A 12-member jury will hear from dozens of witnesses during that time, including family members, and be shown physical evidence. If more than two jurors prove unable to endure the expected marathon of horrors, the proceeding could end in a mistrial. 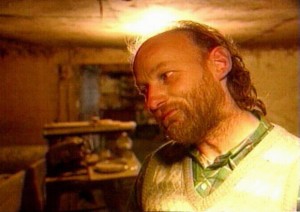 Grim details of Pickton’s alleged crimes are expected to emerge during the trial. For the past five years, the public has heard mainly rumours. The six cases chosen by prosecutors for the trial are believed to have the strongest evidence, not only to prove that the remains of the victims ended up on Pickton’s farm, but also that he was the killer.

“We know that their primary evidence is DNA,” says John Lowman, a criminologist at Simon Fraser University in Vancouver. “It’s going to be fascinating to find out how they link that to Pickton and nobody else.”

Yesterday, prosecutors offered a glimpse of their case by revealing details about what was found in the search of Pickton’s property. These were shocking: skulls, hands and feet of three of the victims were found by investigators in buckets in a freezer. Two of the skulls were sawed in half, and police found shot wounds in them. Jaw bones of two other victims were found in the pigsty. There is also a firearm containing DNA material of one of the victims and of Pickton.

A crucial piece of evidence is a confession Pickton is reported to have made to an undercover policeman posing as a cellmate. Pickton apparently told him he killed 49 women, and was on the hunt for a new victim, to “make it an even 50.” A recording of the conversation will be played in the courtroom. Pickton has pleaded not guilty.

Ernie Crey is anxious for the trial to begin. He received the news he had feared in January, 2004. DNA of his sister Dawn had been found during a thorough analysis of Pickton’s 10-acre property. Excavators, conveyor belts and sieves were used in an intensive analysis of the soil, a search for human bone fragments. Crey was not informed about the nature of his sister’s DNA material, only that it was not enough to indict Pickton for her murder.

“I’m disappointed that no one is being held accountable for the disappearance and death of my sister,” says Crey. “I think her life came to an end there, but I’m left with questions about what happened.” Crey has feelings of bitterness because he thinks the death of many women, including Dawn, could have been prevented if police had taken the disappearances seriously earlier. “Some of the family members think that if the joint task force had been formed earlier, some of the women might have been saved.” 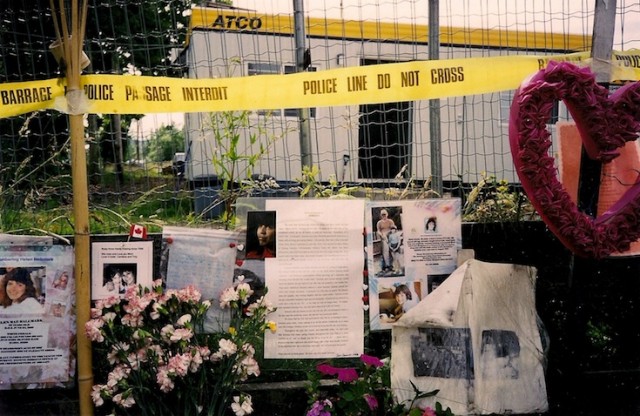 Informal memorial to the missing women near the Pickton farm in Port Coquitlam.

That view is widely held. Observers of the case believe that little was done about the disappearances because the victims were ‘only’ street prostitutes, many of them of indigenous background.

“The police stance symbolized our general attitude as a society to drug-addicted prostitutes: we don’t care about them,” says Lowman, who has done research into violence against prostitutes. He calls the indifference to the fate of street prostitutes, and the ‘discourse of disposal’ around them a “national disgrace”. “We have a situation where these women are so marginalized that serial killers can prey on them.”

Crey hopes some of the families will get justice as a result of the trial. “As dreadful as the news is to them and as difficult as the evidence is going to be that they’re going to have to listen to, at least they will have answers about what happened to their loved ones,” he says. “In Dawn’s case, I may never know, and that fills me with dread and disappointment. I think about my sister every day.”