Members of the indigenous Haida population are reclaiming human remains of their ancestors from museums in North America. They bring the remains home to give their ancestors proper burials. “The way other people have treated us was totally disrespectful.”

The serene silence of Skidegate, a remote village in northwestern Canada, is broken by the crowing of ravens and a power saw. In front of Andy Wilson’s house, a bungalow overlooking a misty, quiet bay, two men are doing woodwork under a tarp. Wilson, a member of the Haida population in his fifties, watches while his friend Terry carefully completes the skeleton of a small, wooden box. 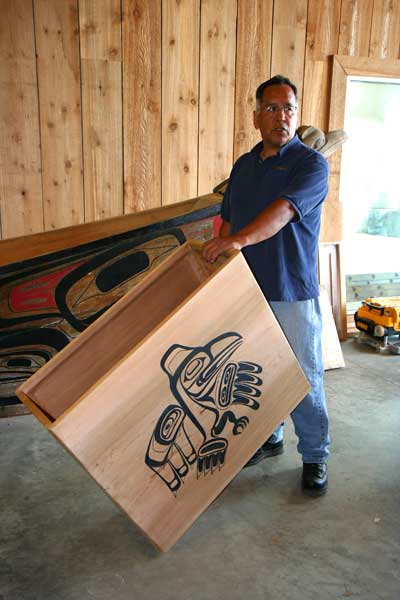 Andy Wilson with a bentwood box at the Haida Heritage Centre

Wilson and his people make many of these boxes, designed to bury members of the Haida population who died in the 19th century. Hundreds of these ancestors are being given a final resting place in their region of origin, the Queen Charlotte Islands off the Pacific coast of Canada, after spending about a century in the storage vaults of various museums. Today’s Haida are working to reclaim the human remains from those institutions, a process known as ‘repatriation’.

Repatriation of indigenous objects by museums has become more common in the last 10 to 15 years. Spurred by increased recognition of indigenous peoples, objects of exceptional value are made available to First Nations on a limited basis. In the United States, a law was enacted in 1990 outlining which items qualify for return. But despite that legal framework, the ownership of indigenous museum holdings remains a thorny issue in practice.

The Haida are one of the most active groups in this area – not least because their human remains were very popular among collectors a century ago. The remains of hundreds of Haida people, ranging from bones and skulls to entire skeletons, were collected by anthropologists in the late 19th and early 20th centuries. Museums were an important market for specimens of indigenous tribes facing extinction. The Haida were decimated by a smallpox plague in the 19th century. Today, their remains are often stored in the vaults of museums.

That is at odds with the Haida belief that a deceased person should be buried in his or her place of birth to find peace, says Wilson, chairman of Skidegate’s repatriation commission. The bones, once “plundered” by collectors, represent the “restless spirits” of the Haida ancestors, he explains. “Hopefully their spirits will rest when they’re taken home. The way other people have treated us is totally disrespectful.” 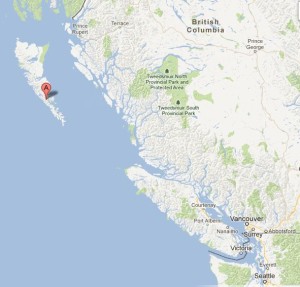 The Haida have repatriated the remains of more than 450 ancestors in the past few years – an unprecedented success, due in large part to their systematic approach. During the 1990s, they have contacted almost all major museums in North America, including the Museum of Natural History in New York, the Field Museum of Natural History in Chicago, and the Museum of Civilization in the Canadian capital Ottawa. Now, they’re in talks with the Smithsonian Institution in Washington, D.C. When all remains from the U.S. have been returned, the Haida plan to set their sights on Europe.

To the Haida, the repatriation process is a kind of group therapy to deal with abuses from the past and a way to take the fate of their people in their own hands. Many members of the island population of about 6,000 are involved in the project. Volunteers organize traditional Haida feasts with singing and dancing for visitors to raise funds. School children make the button blankets in which the bones are shrouded. High school students help paint the boxes. “It’s really important for everybody to bring some closure to the past,” says Wilson.

The history of the Haida, a proud people with a sophisticated culture, took a tragic turn in the second half of the 19th century. A white sailor brought smallpox to the Queen Charlotte Islands. The Haida had no resistance against the unknown disease and perished in large numbers; of a population of an estimated 10,000 in 1863, only about 600 people remained around the turn of the century. Survivors fled their old settlements and gathered in the modern villages of Skidegate and Old Massett. The old, abandoned settlements lay in ruins to this day. 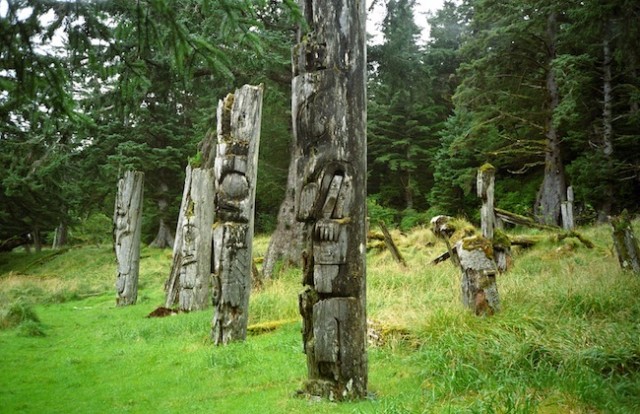 Ninstints, an abandoned settlement of the Haida. Totem poles are a testiment to the former inhabitants.

The remote ghost towns were treasure troves for white traders in popular Haida art, from artifacts to totem poles. Poles with carvings of ravens, eagles, bears and orcas, in graphical Haida style with large eyes, were taken down in large numbers and cut into pieces to be exhibited. Especially popular were death poles, which had a coffin on top with the remains of a prominent resident of the settlement.

Wilson explored the ruins of the old villages in his youth, but only really delved into what happened when he had to take a prolonged period of rest following an accident. He decided to take a new turn in his life and has since visited many museums in North America, in search of his own roots. “We have endured a lot, and we’re here to claim what is rightfully ours,” he says.

The repatriation initiative has also caught on with a younger generation. They have rediscovered the proud history of their people, after it was rejected for most of the 20th century by white authorities in churches and schools. Younger members of the Haida Nation assume the old identity of a powerful, almost intimidating people. Activist leaders claim ownership of the Queen Charlotte Islands, known in their own language as Haida Gwaii, which means ‘homeland of the Haida’.

“We have our ancestors now, we’ll come back for the rest”

Their ancestors never ceded the archipelago to white people in a treaty. With their international reputation and traditional steadfastness, the Haida are today one of the most formidable opponents of the authorities in British Columbia in the ongoing battles over treaty and land rights in the province. “Young people realize that we can have quite an impact as a nation when we join together,” says Wilson.

One of those young people is Nika Collison, co-chair and negotiator of the repatriation commission. With conviction, she speaks about the opportunity to help restore the honour of her people by paying final respects to the ancestors. “The people who lived here before I was born brought our society and our culture to a highly developed level,” she says. “Now we want to bring them home.”

As a negotiator with museums, Collison appreciates the apprehension that the repatriation commission often provokes at the institutions. “First they think we’re mean and scary,” she says. “We have a reputation of Vikings and a history of warfare that translates into today’s world. But in reality, we’re not scary. Our goal is to bring museums to a point where they want to return our ancestors – not because they have to or because there’s pressure, but because they understanding how important it is.” 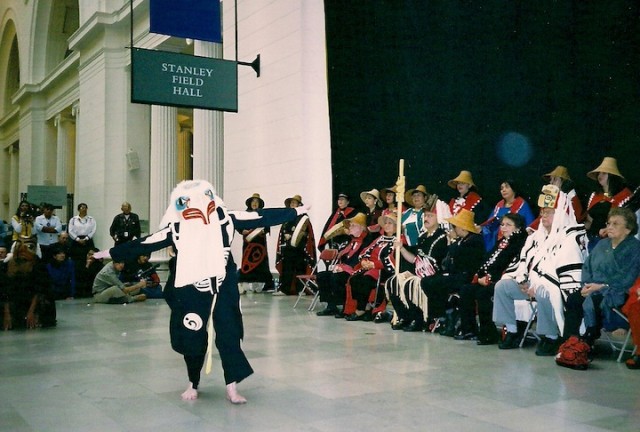 A member of the Haida Nation performs a raven dance at the Field Museum in Chicago, during a ceremony to mark the repatriation of the remains of 150 Haida ancestors.

Collison has observed a gradual thawing in her relations with museums. “They also see now that it was wrong to remove the bones.” Most institutions contacted by the Haida have been receptive to the requests. Recently, the Haida reached their biggest-ever agreement, with the repatriation of about 150 remains from the Field Museum in Chicago.

For Colin Robertson, a speaker for the Haida during a colourful handover ceremony at the Field Museum, the return of the bones is only the beginning. With an eye on the museum’s collection of Haida artifacts, he says combatively: “We have our ancestors now, but we’ll come back for the rest.”

A week after the transfer of the remains and their return journey to Haida Gwaii, Wilson oversees the closing of the boxes. They are buried at a location known only to the Haida, “so nobody can take them away or disturb them again.” Wilson hopes that his own children will be aware of what happened to their ancestors – and take pride in their Haida identity. “People thought the Haida belonged to the past, but we’re very much alive.”

In search of a remote ghost town Sharia in Canada
Share