Correspondent Frank Kuin > Canada & the US > Smooth sailing through the Arctic

Smooth sailing through the Arctic

A historic voyage through the Northwest Passage finds that the icy north isn’t so icy any more. As a result of global warming, the age- old dream of a navigable Northwest Passage might just come true after all. For world trade, it would be a breakthrough.

Jacques Asselin is near the top of the world, peering through binoculars from the deck of the Simon Fraser, a light icebreaker sailing through the Northwest Passage. What he sees, surprisingly, is mostly barren shores and open water.

“I’ve never seen so little ice in the Canadian Arctic,” the Quebec City native says with some astonishment. “When scientists say that there’s less ice here than there used to be, I think it’s true.”

Asselin knows his ice. He spent a good part of the 1960s patrolling the eastern Arctic with the Canadian Coast Guard in a career that spanned four decades. Now retired, he has returned for one more Arctic trip, having volunteered for the chief engineer’s job on the Simon Fraser. 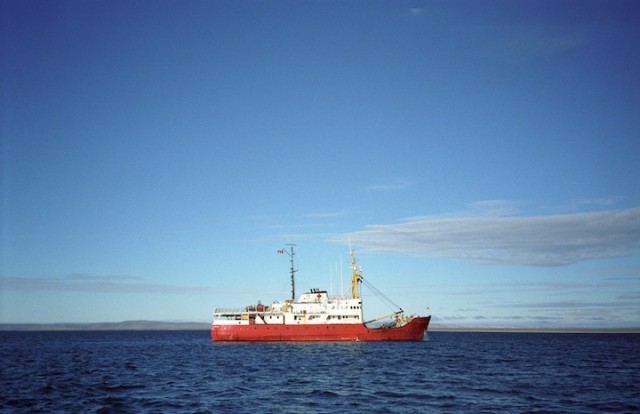 The Canadian icebreaker Simon Fraser in the waters of the Northwest Passage.

The icebreaker traversed the Northwest Passage this summer, serving as the support ship for the Nadon, an RCMP patrol vessel that has recreated the historic 1940-42 voyage of the St. Roch, the first Canadian ship to make it through the Passage. Renamed St. Roch II for the occasion, the Nadon and its crew of Mounties, which set sail from Vancouver in July, are to arrive in Montreal today.

The two ships encountered a different Arctic from the one Asselin remembered. Remarkably, both vessels were virtually unhindered by ice for the entire commemorative trip in August and September. The Nadon, a light, 30-metre catamaran with no icebreaking capability, barely needed the Simon Fraser’s icebreaking services.

By contrast, the original St. Roch took about 27 months to complete the same route 60 years ago. The old schooner, which made the voyage on a wartime mission to boost Canada’s claims to its high north, was hindered year-round by ice. Now being preserved by the Vancouver Maritime Museum, the original RCMP ship spent two winters stuck in the deep freeze.

“I’ve never seen so little ice in the Canadian Arctic”

Looking at the open seas from the Simon Fraser’s deck in August, all that is hard to imagine. Harder still that it took European explorers almost 400 years to find the coveted Northwest Passage. The fabled sea route that held the centuries-old promise of a maritime shortcut to the Orient was eventually written off as unsuitable for regular traffic.

For centuries, the Arctic, one of the world’s final frontiers, mercilessly swallowed up the ships of European explorers as they boldly ventured here in their competitive quest. Most famously, all 128 men of the large-scale Franklin expedition from England vanished and died in the 1840s, in a legendary disaster that apparently degenerated into despair and cannibalism.

Only at the beginning of the 20th century did a ship first make it through the Northwest Passage, when Norwegian explorer Roald Amundsen led a two-year expedition between 1903 and 1905. After Amundsen, who later gained international fame as the first man to reach the South Pole, it took close to 40 years for the feat to be repeated by the St. Roch. It made history by becoming the first vessel to make the trip in both directions.

“In those days, it was pretty rough,” says Asselin, contrasting the hardships on the St. Roch to the clear sailing of the Simon Fraser. The crew of Captain Henry Larsen, he says, “got stuck in the ice and had to hunt for their own food.” 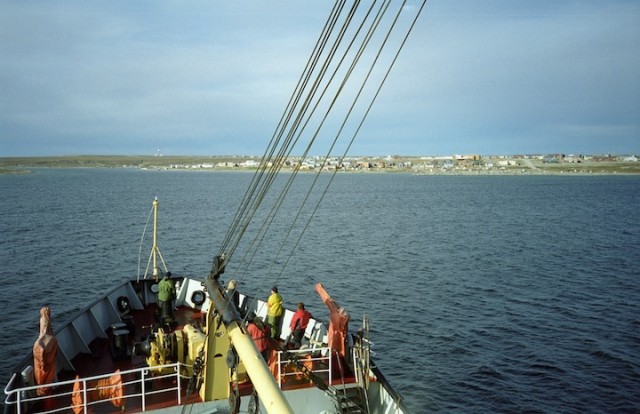 Arrival at Gjoa Haven, a hamlet along the Northwest Passage.

These days, the significance of open water in the Canadian Arctic is dividing scientists. It is unclear whether the easy ice conditions are part of a natural cycle, or a more worrisome consequence of human activity. Some say that it’s all a coincidence – a question of a number of unseasonably warm polar summers in succession – and that ice-choked times will return.

“You’re not going to be able to run a Great Lakes steamship through the Northwest Passage,” says George Hobson, a retired Arctic geologist, on the shore at Cambridge Bay, a small Inuit community and one of the ports of call on the Nadon’s voyage. “You’re still going to need an icebreaker.”

Others suspect that the absence of ice is a result of global warming – tangible proof that the world’s ice covers are melting as a consequence of greenhouse-gas emissions. Studies point to a retreat of Arctic ice by about 4 per cent in the 1990s, preceded by a smaller decline in the 1980s. In addition, according to one American study, the ice cover in the Arctic has become substantially thinner in the last 25 years.

Moreover, scientists say that the melting of Arctic ice may be a self-reinforcing process. As long as Arctic waters are covered with ice and snow, they reflect sunlight and remain cold. But when a larger area consists of dark water, more sunlight is absorbed, so that the water warms up and freezes later. Therefore, says Humfrey Melling, research scientist at the federal Department of Fisheries and Oceans, “if you get increasing amounts of open water, the process may accelerate.”

One implication of this ecological revolution is obvious: the age- old dream of a navigable Northwest Passage might just come true after all. Some predict that within 10 to 15 years – provided the ice retreat keeps its current pace – the Northwest Passage could be open to commercial traffic for up to five months of the year.

Asselin, a veteran of icebreaking tours in northern Quebec and the Gaspé region, is convinced that it is possible. “The kind of vessel that already sails from Europe to Montreal in winter should be able to go through the Northwest Passage in summer with no problems,” he estimates.

For world trade, it would be a breakthrough. The Northwest Passage remains by far the shortest sea route between Europe and Asia, far shorter than the route through the Panama Canal. A cargo ship from London, Hamburg or Rotterdam, traveling through the Canadian north, would sail 8,000 nautical miles to Yokohama, Japan – about 5,000 miles less than via Panama, a saving of more than one- third in time and fuel. No wonder the Passage has been dubbed “the Panama of the North.”

“There could be tremendous potential for economic development up here,” says Ken Burton, skipper of the Nadon and initiator of the commemorative voyage.

Cambridge Bay, for instance, a hamlet of about 1,000 inhabitants, has a young population of Inuit, but limited employment. Will this community, with its modest dock and fuel facilities, become a seasonal port for passing cargo ships, with container docks, sailor nightlife, even smuggling?

The same could be asked of other Inuit communities in the region: Gjoa Haven, where Amundsen wintered twice and which is named after his ship; Taloyoak (formerly Spence Bay), where the St. Roch wintered; and Pond Inlet, at the northern tip of Baffin Island. Each of these friendly Inuit towns, where the summer days are long and chilly, met the Nadon with warm receptions of drum dances and traditional food offerings, such as whale meat.

The prospect of commercialization has some Canadians worried, however. Doom scenarios have large oil spills tainting the fragile Arctic landscape, and undetected vessels bringing in smuggled goods or illegal immigrants to the vast area, which is largely unpatrolled. Only a few hundred police officers and soldiers keep an eye on the Canadian Arctic, a land mass the size of Europe.

Canada has no icebreaker capable of year-round navigation of the Passage, let alone a submarine with that capacity.

“If traffic by foreign countries increases, we should think about raising our patrol capabilities,” says Bob Mellis, captain of the Simon Fraser and a 36-year veteran of the Coast Guard, navigating the ship calmly through Simpson Strait. “Unless we can establish that people coming through are responsible, we’re compromising the Arctic.”

As it stands, Canada expects all vessels that enter its Arctic waters to present themselves and ask for permission. Most do, but incidents to the contrary are becoming more frequent. Last summer, a Chinese vessel entered the western part of the Passage for reasons that have remained unclear. On the east side, a submarine was spotted, probably of French or Russian origin. No doubt there are submarine intrusions that remain undetected.

Of greatest concern is a possible challenge to Canadian sovereignty over the area by the United States. Washington has never recognized the waters of the Passage as Canadian. It insists they’re international waters, like the Straits of Gibraltar or the waters in the Indonesian archipelago. According to the U.S., they should be subject to the international right of free navigation.

Twice, the United States has sent ships through the Northwest Passage without asking for Canadian permission. In 1969, the oil tanker Manhattan went through, followed in 1985 by the U.S. icebreaker Polar Ice. In response to the latter, Canada and the U.S. signed an uneasy truce in which they agreed to disagree on the status of the Passage, and pledged support to each other’s vessels.

Should a problem arise with the Panama Canal, which is no longer in American hands, U.S. pressure may mount to open up the Northwest Passage to commercial traffic. In fact, analysts say that the Canadian view of the Passage as internal waters would stand little chance of surviving a challenge before an international tribunal. An adverse verdict would in effect declare the Northwest Passage open to all.

Back on the frigid waters of the Canadian Arctic, Ken Burton imagines the consequences in a few decades’ time. “It would require a significant investment in the north’s infrastructure on the part of the Canadian government,” he says. “Equipment would be needed that can withstand the winter weather.”

Looking out over the empty seas, bleak shores and endless tundra in the distance, Burton pauses for a moment. “In a way it would be a shame,” he says. “I like it the way it is up here. Let’s leave it as it is.”