Canada’s neoconservative Prime Minister Stephen Harper has been pushing his country to the right for almost a decade. Many Canadians are longing for the idealism of the past and want to vote the Conservatives out in today’s general election. “We’re voting for change because we want the caring Canada of our youth back.”

Canada’s Prime Minister, Stephen Harper, has been touring the country like a quizmaster in recent weeks. The neoconservative leader has appeared at campaign stops armed with an old-fashioned cash register bell and a pile of banknotes. He is warning Canadian voters against the costs of election promises by his main rivals, the Liberal Party, in today’s general election.

If the Liberals take power, as opinion polls predict, Canadian middle class families run the risk of losing thousands of dollars in tax benefits his government has implemented in recent years, Harper warns. He has been listing deductions he says are at stake, with a supporter dropping small stacks of cash onto a table and the cash register ringing out: ka-ching!

“That is what Liberal change means: more money for the government, less money for you,” according to Harper. 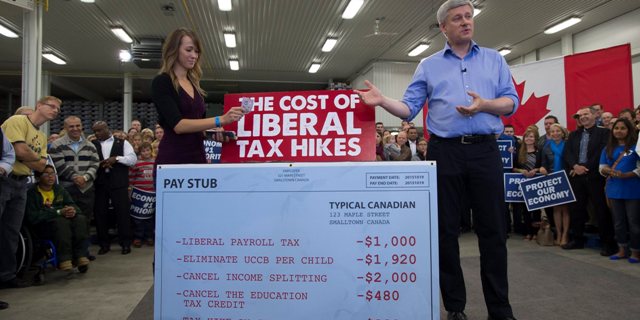 The desperate spectacle underlines growing fears among Conservatives that Harper’s improbably long term as Prime Minister of Canada is coming to an end. After almost a decade of Conservative government, voters in moderate Canada appear set to return to the centre-left, where a large part of the electorate traditionally feels more at ease.

Voters especially in Canada’s large cities, many of whom have a strong dislike for the polarizing Harper, are pining for the end of his term as Prime Minister – much like progressive Americans longed for the departure of President George W. Bush.

During his decade in power, since 2011 with an absolute majority in the House of Commons in Ottawa, Harper has pushed Canada decidedly to the right, both domestically and on the world stage. With the support from rural conservatives and middle class voters in the sprawling suburbs of Canadian cities, he pursued a fiscally conservative policy aimed at fostering economic growth after the worldwide recession.

Harper, an economist by training, has been praised for the way he guided Canada through the crisis. But his opponents say the country – which takes pride its social programs such as universal health care and a strong system of public education – has become less social and more like the United States under his government.

Domestically, Harper has emphasized the extraction of heavy oil from the tar sands in the western province of Alberta, his home base. He pushed for the construction of the controversial Keystone XL pipeline for tar sands oil to the United States, which has not been approved by U.S. President Barack Obama.

Harper abolished the long-gun registry, a hard-fought cornerstone of arms control north of the Canada-U.S. border. Despite declining crime rates, he took a tough-on-crime stance, including the construction of new prisons. He made deep cuts in the budget of the public broadcaster CBC, cherished by many Canadians. His government has muzzled public sector scientists, most notably in the area of climate change, and is notorious for its obsessive secrecy and mistrust of the media.

Following an attack in the capital Ottawa, a year ago this week, Harper introduced strict antiterrorism legislation, with greater powers for intelligence agencies to keep an eye on individuals. Opponents say the law is draconian. He views ISIS as a direct threat to Canada and has not hesitated to stoke fear of Muslims during the long election campaign, in spite of the traditional Canadian tolerance towards minorities.

“Canada is no longer such a good global citizen”

Internationally, Harper made Canada an active participant in bombing ISIS targets in Syria. To the chagrin of many Canadians, who like to see their country as a moralistic peacemaker in contrast to perceived American belligerence, Harper repeatedly positioned Canada to the right of the U.S., for instance when it came to unconditional support for Israel.

Moreover, the Harper government withdrew Canada from the Kyoto Protocol on the reduction of harmful greenhouse gas emissions. Canada became the only country that signed the treaty but later abandoned it. The Bloomberg news agency wrote this weekend that after ten years of Harper, “Canada is no longer such a good global citizen.”

Many Canadians are deeply bothered by that, like Mary Cleaver from British Columbia. She wrote in an open letter that, as the mother of a young family, she benefits from the tax advantages Harper listed with the cash register. “But it’s not the only thing that matters to us,” she wrote. “On October 19, we’re not voting for our bank balance. We’re voting for change because we want the caring Canada of our youth back.” 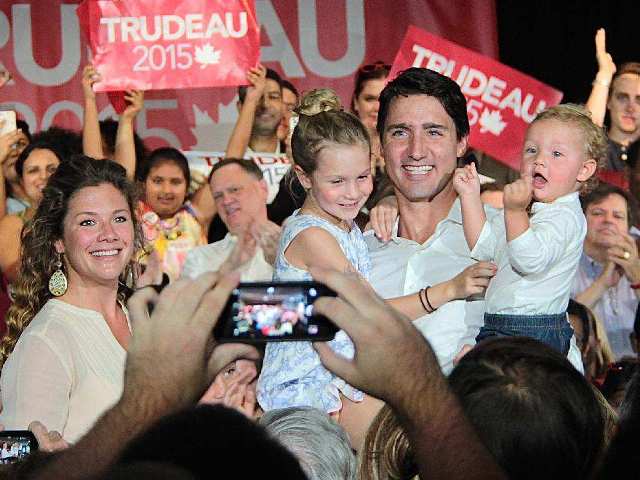 The reason Harper has been able to serve as Prime Minister for almost 10 years, despite being disliked by a large section of the electorate, is vote-splitting on the left of the political spectrum. The centrist Liberals and social-democratic New Democratic Party (NDP) divide left-leaning voters amongst them, allowing Harper’s Conservatives to come out ahead in a large number of electoral districts or ‘ridings’.

Harper’s bet at the outset of the election campaign was that this dynamic would repeat itself today. But he may have overstayed his welcome. In the past few weeks, the Liberals and their new leader, the youthful Justin Trudeau, have begun a steady advance in the polls.

Trudeau, the eldest son of the legendary Liberal Prime Minister Pierre Elliott Trudeau, is the personification of the more idealistic image of Canada that letter writer Mary Cleaver referred to. He called on Harper’s opponents this weekend to rally behind him to end “the Harper decade”.

One Response to Progressive Canadians pine for end to Harper decade