King Willem-Alexander and Queen Máxima of the Netherlands spent the last day of their three-day state visit to Canada in Toronto. They visited the Ontario legislature at Queen’s Park, met with the Dutch soccer women, and unveiled a special gift on the Toronto Islands.

On the third and final day of their state visit to Canada, King Willem-Alexander and Queen Maxima flew from Ottawa to Toronto, Canada’s largest city. At the Ontario legislature, they met the Lieutenant-Governor of the province, as well as Ontario premier Kathleen Wynne along with her partner, Jane Rountwaite.

Premier Wynne, who lived in the Netherlands for several years with her former husband and their three children, spoke Dutch with her royal guests. After the meeting, the royal couple went outside, where a few hundred well wishers from the Dutch-Canadian community had assembled in front of the legislature at Queen’s Park. The King and Queen greeted cheering members of the crowd, some of whom were dressed in orange. Some took selfies with Queen Máxima: 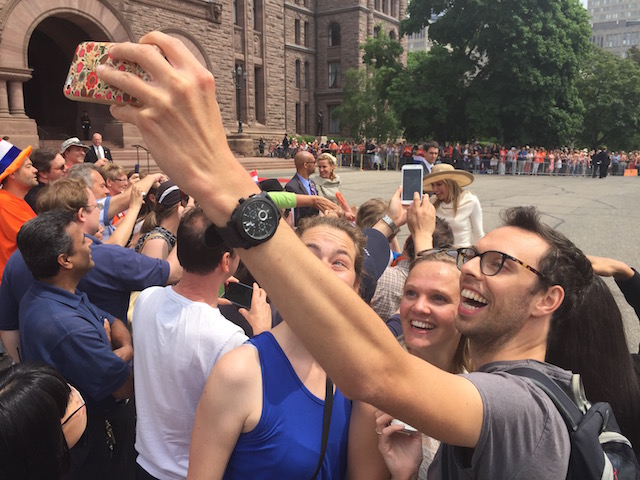 Spectators take selfies as Queen Máxima greets members of the crowd in front of the Ontario Legislature.

The group walked to the MaRS Innovation Institute, across the street from Queen’s Park, where the King and Queen received a tour of several startups, in the areas of bicycles and water management, among others. In the afternoon, the royal couple visited Monarch Park Stadium in eastern Toronto, where the Dutch women’s soccer team is training for the FIFA Women’s World Cup. The tournament begins in Canada next week. King Willem-Alexander and Queen Máxima chatted with the players and joined them for a group photo. 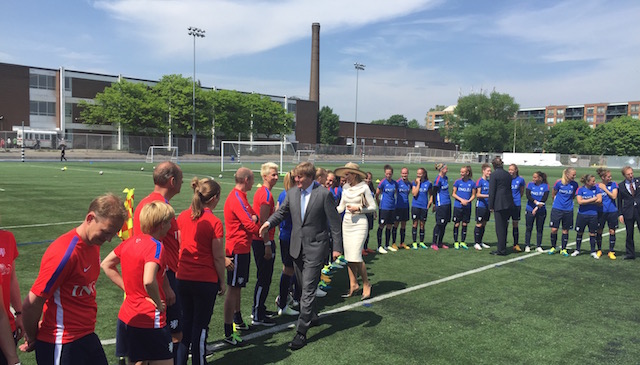 The royal couple meets members of the Dutch team for the FIFA Women’s World Cup, which kicks off next week in Canada.

“You are role models for a lot of girls that this is possible,” King Willem-Alexander told the soccer players. “So you have already achieved that. Good luck, we support you.” 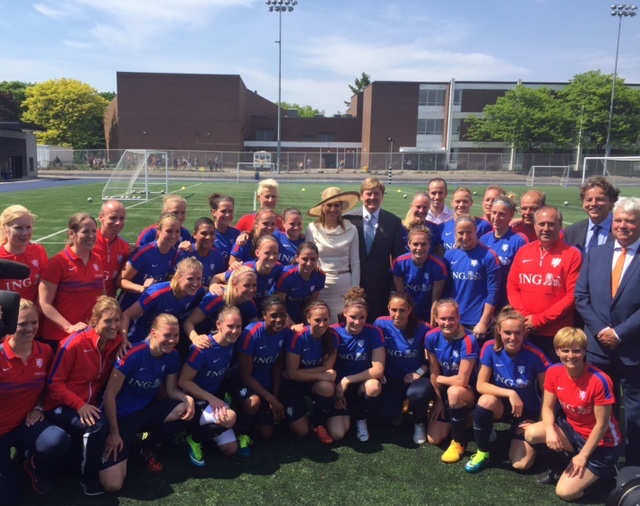 The royal couple with the Dutch soccer team at the FIFA Women’s World Cup.

From Monarch Park Stadium, the royal couple travelled to Toronto’s waterfront on Lake Ontario. At York Quay Pier, they boarded the small ship ‘Hiawatha’ for a crossing to the Toronto Islands, a group of small islands in Lake Ontario that together are a city park with views of the downtown Toronto skyline. 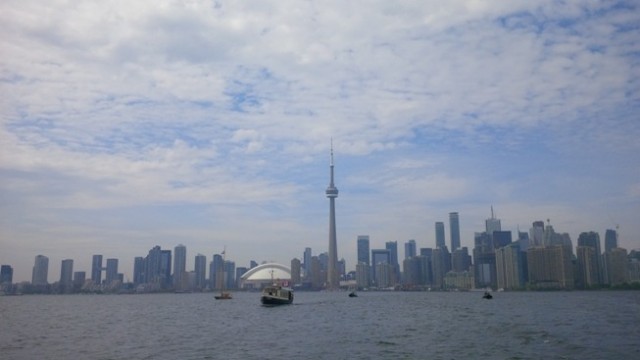 The ‘Hiawatha’ with the royal couple on board sails from downtown Toronto to Toronto Islands Park.

On Centre Island, the group walked to the spot where seven ‘Tulpi’ chairs were waiting to be unveiled. Toronto mayor John Tory, who succeeded the controversial Rob Ford last fall, mentioned the close ties between sister cities Toronto and Amsterdam. Both cities have a bridge named after the other. The King and Queen then unveiled the first of the ‘Tulpi’ chairs:

The Tulpi chairs are designed by Marco Manders. Each chair resembles a large tulip. One half of the flower can be opened to sit on.

In the evening, the closing part of the state visit took place: a reception for the Dutch community at the Art Gallery of Ontario. Ambassador Cees Kole noted that the month of May is dedicated to Dutch heritage in Canada, because of the special bond between the two countries. “Your visit has made this May even more special,” he said.

King Willem-Alexander described the ties between Canada and the Netherlands as “a perfect relationship”. He told the guests that they are all ambassadors for the Netherlands in Canada, and encouraged them to keep working on “new relations for the next 70 years.” 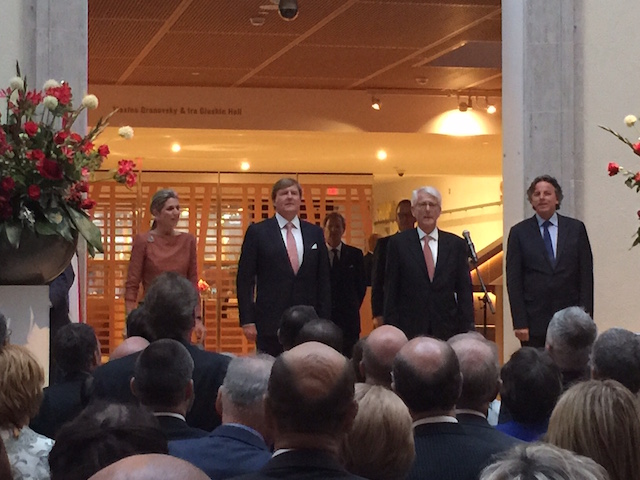 Queen Máxima and King Willem-Alexander sing the Dutch national anthem along with Cees Kole, the ambassadeur of the Netherlands to Canada, Dutch foreign minister Bert Koenders, and members of the audience.