Indigenous children in Canada were traumatized and abused for many decades at residential schools meant to assimilate them into white society. A national Truth and Reconciliation Commission is traveling the country to hear testimonies about the former policy, which has been suppressed for years.

By Frank Kuin in Edmonton

Assisted by two friends and a social worker, Therese Moberly, an elder of the Dene population of northern Canada, takes a seat on a stage in an Edmonton conference hall. Under the spotlight, at a table with water and tissues, she is ready to tell a national Truth and Reconciliation Commission about her traumatic experiences as a little girl at an Indian Residential School.

“There was a big barge, because there were no roads at that time,” Moberly recalls about the day when she was taken away from her parents by representatives of the Canadian government, like some 150,000 other indigenous children over many decades. “I remember my mother taking my hand and she told me to step on the barge. Then the barge started moving. I saw my mother on the dock disappear, the farther the barge went, the smaller she got.” Moberly breaks down, an aid worker puts an arm around her shoulder. 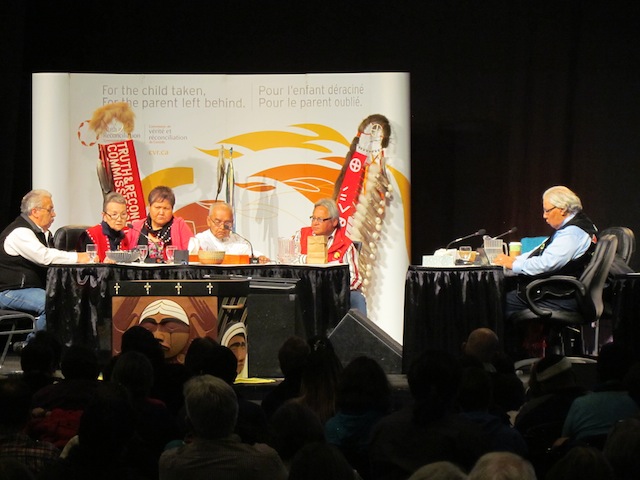 A residential school survivor during her testimony to the Truth and Reconciliation Commission.

From age 6, Moberly was forced to go to the Indian residential school at Île-à-la-Crosse in Saskatchewan, one of about 130 such boarding schools throughout the country. The schools have since been discredited as harmful institutions where indigenous children were physically, psychologically and sexually abused. Now, decades later, she is one of thousands of former students to give testimony to a Truth and Reconciliation Commission about the dark chapter in Canadian history.

“When we were halfway down towards the river, I felt for the first time loneliness and rejection,” Moberly continues with a halting voice, while one of the three members of the Truth Commission listens attentively. The audience of hundreds, mostly indigenous people but others as well, is silent. “I thought my mother didn’t love me, that’s why she gave me away.”

“I thought my mother didn’t love me, that’s why she gave me away”

The true reason of her removal from her parents was much darker: a large-scale and long-standing policy of the Canadian government to assimilate all children of the indigenous population into white society. The aim of the residential school policy, which was in place from about 1850 to 1970, was to “get rid of the Indian problem,” an official of the Canadian Department of Indian Affairs wrote in 1920. “Our objective is to continue until there is not a single Indian in Canada that has not been absorbed into the body politic.”

Life at the residential schools, which were run by Catholic and Protestant churches, was lonely and hard, former students tell the traveling commission. Many describe how children were thoroughly washed upon arrival, and treated with a product against lice. Pupils were beaten for speaking indigenous languages, which were rejected as ‘the devil’s tongue’. There was no family life, and children were taught to be ashamed of their origins. 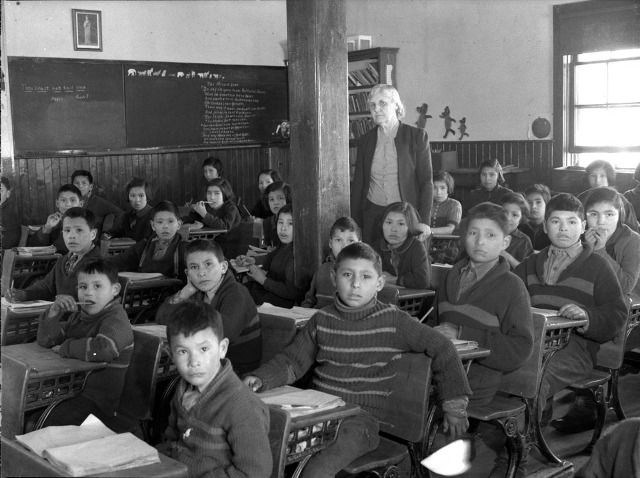 Cree students at the Anglican-run Lac la Ronge Mission School in Saskatchewan in 1945. The blackboard on the left reads: “Thou Shalt Not Tell Lies.” Archives and Library of Canada

Moreover, many children faced atrocities. Sexual abuse was not uncommon. An estimated 4,000 children died at residential schools, in fires and accidents, fleeing attempts, suicides or for unknown reasons. In some cases, students were used for nutritional experiments. Given the purpose of the schools, to “kill the Indian in the child”, the former policy is sometimes described as “cultural genocide”.

“I was obedient to the staff’s commands, because I didn’t want to be punished,” says Stan Humchitt, a member of the Kwakiutl Nation of the West Coast. From 1954 to 1964, he went to St. Michael’s residential school, where he was confronted with harsh punishments, he says. In one instance, a child incurred head injuries during a beating with a belt. Humchitt is still struggling with it. “This is the first time I learned how to hate, how not to trust,” he says softly. 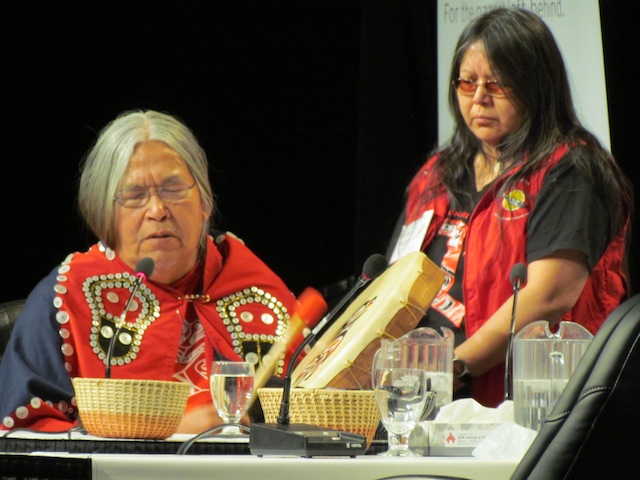 Stan Humchitt sings and plays a drum during his testimony.

The abusive residential school practices were wrong, the Canadian government has since acknowledged – indeed, the policy was racist. In 2008, the government of Prime Minister Stephen Harper offered a formal apology in Parliament in Ottawa. It was accompanied by a financial compensation settlement worth billions of dollars, and the establishment of the Truth and Reconciliation Commission. Its aim is to fully face the truth about residential schools, which has been suppressed for many years – not just by victims for their healing, but also by Canadian society at large.

“This story is underrepresented within the historical narrative of Canada,” says Jason Golinowski, a resident of Edmonton who has come to the event with his family to listen. He went to public school in Alberta, but never learned anything about residential schools, and little about indigenous people, he says. “If someone came to take away my child, I would be devastated. Canadians need to know this story. It’s a good first step, because until now, there hasn’t been a lot of recognition of this problem.”

“This story is underrepresented in the historical narrative of Canada”

Participants in the truth and reconciliation process hope to find recognition of the serious damage the residential school policy did to aboriginal communities. Family ties were broken, experience in raising children was lost; in many families, children were not raised by their own parents for three or four generations. Students’ connections with their own cultural identity were severed – but they also remained disadvantaged in white society. Many lost their way and became addicted to alcohol and drugs.

“Residential schools stripped us of our culture, of our identity and our connection to the land,” says Telly James, a young social worker from the Siksika First Nation in Alberta. He works on suicide prevention in the community. “We are looking for ways to find that identity again, because by reclaiming it, there’s less risk of getting into a downward spiral of addictions and suicide. But healing can’t start until it’s validated by the rest of Canada.”

Humchitt has experience with that cycle. With tears in his eyes, he shows scars on his arms from a suicide attempt, later in his life. “I had anger so deep inside me.” For years, he struggled with alcoholism, but for the last 13 years he has been sober, he says. “The saddest part is that I was not raised by my own mother and father,” says Humchitt, who wears his gray hair in a long braid. “But they have not destroyed the native in me. My skin is still brown.”

Still, the image of Native Canadian life is often dominated by problems such as high unemployment, addiction and neglect. Many aboriginals live in poverty on reserves, in circumstances that might be seen in developing countries rather than in a rich nation like Canada. Aboriginal children are still significantly poorer than children in the rest of society. Shawn Atleo, outgoing national chief of the Assembly of First Nations, has noted that indigenous youth are more likely to end up in prison than to finish high school.

“The truth is hard, but reconciliation is going to be even harder”

According to David Langtry, acting Chief Commissioner of the Canadian Human Rights Commission, the problems facing Canada’s indigenous population are “the most pressing human rights issue in Canada today”. It is important to collectively carry the burden of the residential schools legacy, he said at the Edmonton event. “This is not an aboriginal problem, it is a Canadian problem. We all have to take ownership and assume responsibility. This begins with awareness.”

For most people involved in the Truth and Reconciliation process, reconciliation with Canadian society should come in the form of measures to substantially improve the life of indigenous people. That would require not only acknowledgement that the policy of the past was wrong, but also a renunciation of deep-rooted assumptions that were at the root of the policy, holding that native people were inferior, pathetic, hopeless.

Murray Sinclair, chairman of the Truth Commission, has set a goal to write a final report “that all of Canada will have to respond to in a positive way”. The report, with recommendations from the commission, is due in the summer of 2015. “We owe that to the survivors, but we also owe it to those within Canada who still don’t believe this, surprisingly,” he said in his closing remarks. “We will convince them. But reconciliation is not going to be easy. If you thought the truth was hard, reconciliation is going to be even harder.” 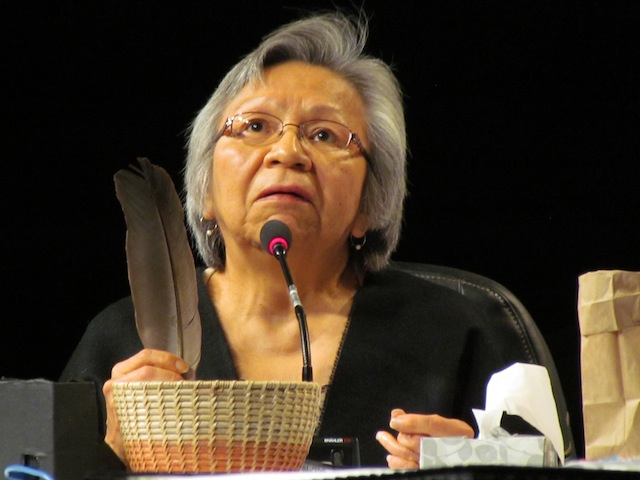 A residential school survivor gives testimony to the Truth and Reconciliation Commission.

First Truth Commission on violation of rights of children

In the past 50 years, about 40 Truth and Reconciliation Commissions have been established regarding human rights violations, including well-known examples like the one in South Africa after the apartheid era. The Canadian commission is the first to focus specifically on a historic violation of the rights of children. It is also one of the first truth commissions in a western democracy.

The Canadian Truth and Reconciliation Commission was established following a settlement between survivors and the Canadian government worth about $5 billion.

All former students who are still alive are entitled to damage payments of thousands to tens of thousands of dollars. In total, about 150,000 aboriginal children attended residential schools; it is estimated that less than half of them are still alive. Nearly 38,000 claims have been filed.

The aim of the Truth and Reconciliation Commission is to describe the history of the residential schools as completely as possible, and to facilitate reconciliation over the discriminatory policy between indigenous survivors and Canadian society as a whole, through recognition of collective responsibility for past abuses.

As the process is based on a legal settlement, there is no criminal component to the hearings. Nobody can be forced to testify. Victims do not come face to face with executors of the policy. No perpetrators of abuses are singled out for prosecution.

The Canadian commission has a five-year term, which was recently extended by one year. The commission, which has cost $60 million, has heard about 7,000 testimonies during that period. In 2015, its final report will be released. In addition, a national research centre on the residential school policy will be established at the University of Manitoba. 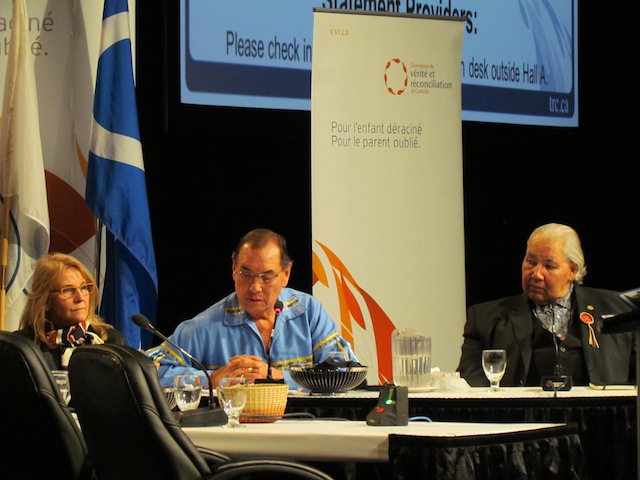 A Canadian commission writes a report recommending to take indigenous children away from their parents. The first residential schools are opened at this time.

A medical inspector writes a controversial, damning report on the boarding schools in which he describes poor conditions and a high mortality rate of 24 per cent, due to tuberculosis and other causes.

After growing recognition that the residential school system is expensive and not very effective, inspectors of Indian Affairs recommend its abolition. Aboriginal children increasingly go to day schools on reserves, or public schools.

Most Indian residential schools have been closed; six institutions close in the 1980s, the last one is closed in 1996. Protestant churches apologize in the 1980s and 1990s.

The cabinet of Prime Minister Stephen Harper apologizes on behalf of the Canadian government for the residential school policy during a ceremony in the federal Parliament in Ottawa, as part of a compensation settlement worth $5 billion.

A Truth and Reconciliation Commission is established, consisting of three commissioners. They must report in 2015. 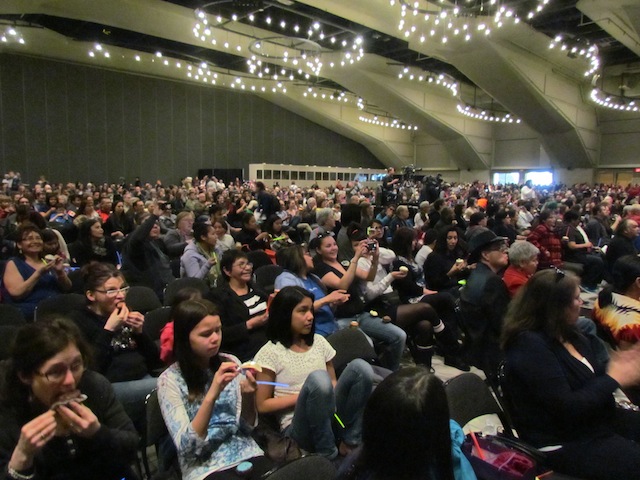 Audience during the National Event of the Truth and Reconciliation Commission in Edmonton, Alberta.