Toronto mayor Rob Ford is taking a leave of absence to deal with his infamous addiction issues. The surprise move comes after a new video emerged in which he is allegedly seen smoking crack cocaine. He still wants to remain a candidate for re-election in the fall.

Toronto mayor Rob Ford is taking an immediate leave of absence to take on his addiction problems, he announced unexpectedly last night after a new video surfaced in which he is allegedly seen smoking crack cocaine. However, he will remain a candidate for re-election as mayor of Canada’s largest city later this year.

“I have decided to take a leave from campaigning and from my duties as mayor to seek immediate help,” Ford said in a statement that was issued last night around 11 p.m. “I know that I need professional help, and I am now 100 per cent committed to getting myself right.”

The surprise announcement by Ford, who gained international notoriety last fall with his admission that he had smoked crack cocaine “in a drunken stupor”, was prompted by the emergence of a new video in which he is allegedly seen smoking from a crack pipe. The video was reportedly made around 1 a.m. on Saturday night by a drugs dealer at the home of Ford’s sister, who has publicly acknowledged her own substance abuse issues. 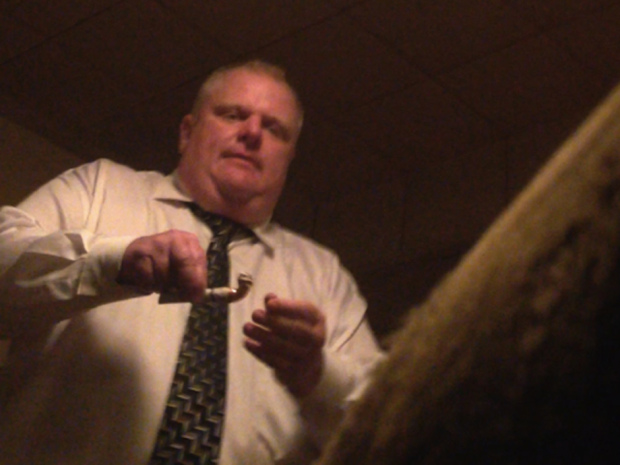 Still of a video in which Rob Ford is allegedly seen smoking crack cocaïne (Gawker).

The footage of Ford, who has stayed on as mayor with reduced powers, has been offered for sale to Toronto’s Globe and Mail newspaper for hundreds of thousands of dollars. The paper has not purchased the video, but has a still frame in which Ford is seen with a pipe. Two of its reporters have watched the video. According to their anonymous source, the pipe is a crack pipe. The video has also been offered for sale to the website Gawker.

According to the Globe and Mail, Ford is seen moving back and forth restlessly and making jerky motions with his arm. An associate of Ford who is suspected of drug trafficking is also seen on the footage. That man, Alessandro Lisi, has been linked to extortion over an earlier video of Ford smoking from a crack pipe. That video emerged about a year ago and eventually prompted Ford’s admission in November. Neither video has ever been made public.

The publication of the photo of Ford, who is running an unlikely campaign for re-election as mayor of Canada’s largest city, prompted a new wave of outrage, indignation and ridicule in Canada – even though revelations about the mayor’s antics are no longer surprising. Although Ford remains in the national spotlight, it has been relatively calm around the world-famous mayor in recent months.

As if the second crack video wasn’t enough, a sound recording also emerged yesterday in which the mayor is heard going on a rant in a bar. On that recording, taped surreptitiously on Monday evening by a patron of the bar, Ford can be heard cursing and making offensive remarks about one of his opponents in the race for mayor, and about his own wife. That recording was quickly overshadowed by the new crack video.

The new controversy surrounding Ford is a big setback for his re-election campaign. During the campaign, which kicked off this month, Ford has presented himself as a changed man who has learned from his mistakes. Although he is widely despised in downtown Toronto, he still has some popularity in the sprawling suburbs of the city. Voters from those areas appreciate his reputation as a down to earth politician who fights for the common man. Until yesterday, he was still considered a contender.