Fire and Ashes: Ignatieff analyzes his failed venture into politics

Nine years ago, author Michael Ignatieff entered Canadian politics. It didn’t end well. His Conservative opponents launched a relentless ad campaign against him. But he also lacked a connection with voters. In his new book, Ignatieff shares the lessons he drew from his political experiences.

On paper, Michael Ignatieff seemed destined for great success when he was persuaded to become a politician in his native Canada. The internationally known intellectual, widely respected for his books and articles on politics and human rights, was a charismatic, enlightened thinker who would save the mighty Liberal Party from a steady downward spiral with fresh ideas and a new outlook.

Party officials came to Boston, where Ignatieff taught at Harvard, with an offer that seemed too good to turn down: he would return to Canada after spending almost 30 years in the United States and Britain, to become a candidate for the federal parliament in Ottawa. Then, at the earliest opportunity, he would contest the leadership of the Liberals, a centrist party that has dominated federal politics in Canada for much of the 20th century. He might become prime minister. It almost couldn’t go wrong.

Ignatieff took the bait. The scholar of politics coolly embarked on a political career: a turbulent six-year period in which he did make it to parliament and became leader of the opposition. But the adventure ended in a fiasco with the general election of 2011, when under his leadership the party won only 34 seats in the more than 300-member House of Commons – a historic low. Ignatieff lost his own seat. It was a painful flop. 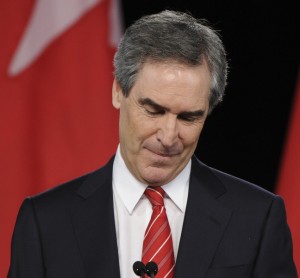 Defeated, Ignatieff returned to academia to take up his old profession as a political thinker and writer, starting with an analysis of his experiences as a politician. In Fire and Ashes: Success and Failure in Politics, Ignatieff accounts for his own mistakes – and slams the current state of politics in Canada and other Western countries. The political culture, he argues, is not enough about genuine debate and an exchange of ideas.

Ignatieff admits it was foolish, even arrogant, to present himself as potential party leader and prime minister out of the blue. He jumped straight into the deep end with only theoretical knowledge – and was quickly confronted with quotes from his extensive work as an intellectual, taken out of context. For instance, his writings about whether torture was ever justified in the fight against terrorism came back to haunt him. “Tendentious political misreading of something you said years before … has become a key tool in the arsenal of modern politics,” he learned.

Ignatieff blames his failure in large part on his political opponents, the Conservatives led by Prime Minister Stephen Harper. They launched a relentless campaign of political attack ads on television in which Ignatieff was portrayed as a haughty outsider who returned to Canada to claim the country’s leadership after a decades-long absence. “He didn’t come back for you,” was the endlessly repeated slogan that hurt his credibility. He’s  “just visiting.”

According to his own analysis, Ignatieff was denied ‘standing’ in his own country in this manner,  despite his deep roots in the Canadian elite and despite his best efforts to win over Canadian voters by attending countless barbecues, rodeos and pancake breakfasts, far from the university milieu where he feels more at ease.

A background as an intellectual is no advantage in politics, Ignatieff learned. “I had studied all these problems and came away thinking that since I had studied them, I must know something about them. I hadn’t yet realized that political knowledge is something quite different: knowing an issue in your guts, not just in your head.”

Ignatieff was dismayed by the House of Commons, which is more often the scene of juvenile bickering in front of the TV cameras than of substantive debate. Politicians in Canada and elsewhere treat each other too much as enemies rather than opponents, he argues with conviction.

The point may be valid, but  his attempt to turn the tide did not catch on. During the 2011 election campaign, Ignatieff took on Harper’s anti-democratic tactics of circumventing Parliament. He tried to inspire the electorate to a political revolt with a battle cry: Rise up!

It was thoughtful, sincere and substantiated, and yet it fell short. Ignatieff simply did not click with a majority of voters. His candidacy lacked that elusive aspect of politics, an instinctive connection. It is also absent from his thought-provoking book, which at times comes across as an attempt to remind Canadian readers what they’re missing.

After his defeat, Ignatieff took comfort in the notion that some major political thinkers in history also failed as politicians, such as Machiavelli and Max Weber. An academic at heart, Ignatieff learned from his political career, and he’s sharing the lessons. As a study of the pitfalls aspiring politicians should watch out for, and a frank account of failings as well as successes, Fire and Ashes offers a compelling perspective on modern politics.