Once a leader, RIM now lags

Research in Motion, the BlackBerry maker that introduced mobile e-mail, is struggling. Global demand for smartphones is growing, but RIM’s market share is in decline. Investors and analysts are wondering if BlackBerry’s best days are behind it.

It used to be that Mike Lazaridis and Jim Balsillie were welcomed as demigods of the tech sector at the annual shareholders meeting of their company, Canada’s Research in Motion. The co-CEOs of the BlackBerry maker that introduced mobile e-mail and turned it into a global phenomenon acquired hero status thanks to the meteoric rise of the company into a multinational corporation worth billions of dollars.

For years, Lazaridis and Balsillie, the technical genius and the chief salesman at RIM, respectively, were above criticism. Together, they propelled BlackBerry into its position as an indispensible device for business and politics, overcoming initial skepticism about the security of sending e-mail through the ether. E-mail on the go became so indispensible and addictive that the BlackBerry, known for its distinctive keyboard, was nicknamed ‘CrackBerry’, after crack cocaine. Even U.S. President Barack Obama is a fan.

And RIM’s rise as a stock market darling didn’t end there. In recent years, BlackBerry became a hit gadget among consumers as well. Like corporate executives, non-corporate users also became hooked on RIM’s ‘push e-mail’: messages that are delivered to the devices through the company’s network of servers, announced by a tone. BlackBerrys could barely be made fast enough; by now, there are 67 million users worldwide. Not bad for a start-up in the Canadian university town of Waterloo. 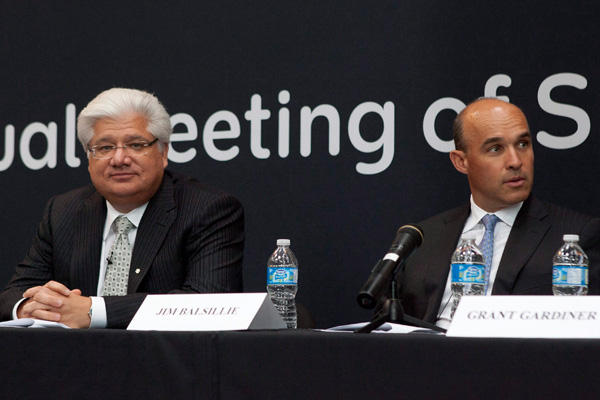 The euphoria of previous years was tempered considerably, however, when the two co-CEOs met with shareholders this week. Not because of the company’s financial results, as the executive duo can still boast impressive figures: last year, RIM had sales of nearly $20 billion, a ten-fold rise from $2 billion five years ago. Profit for the year came in at $3.4 billion.

Rather, the sense of crisis at the AGM had to do with panic that has erupted about the future growth of the company. Suddenly investors are wondering if BlackBerry is past its prime. The mobile e-mail device has had to contend with increasing competition – especially from the trendier iPhone by Apple and cheaper smartphones running on Google’s Android operating system, such as devices by Samsung and Motorola.

The negative sentiment is based on some bad signs – the first in RIM’s history. For instance, BlackBerry sales in the crucial North American market have stagnated in recent quarters, even though that market is itself growing rapidly. As a result, RIM is losing market share in North America to iPhone and Android smartphones at an alarming rate. BlackBerry had 50 per cent of the market in 2009; it has since been reduced to 17 per cent. “You’re letting Apple and Android eat your lunch,” one shareholder told RIM’s executives during the meeting.

RIM sales are also under pressure. In the first quarter, revenue in the U.S. declined by 27 per cent compared to the same period last year. For the current fiscal year, the sales outlook has been revised to just over $21 billion – slight growth compared to last year, expected to be delivered primarily by growth in markets outside of North America.

“Looking at the stock price, you’d think the company was heading to oblivion”

Investors have responded strongly to the bad news. RIM’s stock has lost about half its value this year. As a result, a very profitable company with annual revenues of over $20 billion now has a market value of less than $15 billion. “If you look at the stock price, you would think the company was heading towards oblivion,” says Michael Urlocker, analyst with GMP Securities in Toronto. “And if you look at the financial results, you would think they were going to paradise.”

RIM still claims the latter. According to management, the company is facing a temporary setback due to a time-consuming transition to a new operating system for BlackBerry. Once that is completed, everything will be fine, Lazaridis told the annual meeting. “We have been delayed, but we will come out of this strengthened.”

The big question on investors’ minds is whether that is true. Is the current unease just a bump on the road to further growth? Or is RIM, one of the most successful tech companies of the last decade, irrevocably on the wane? Critics compare RIM to Nokia, the Finnish handset maker that squandered its lead because of an inability to adapt to new market conditions. In their view, RIM is in a similar position: BlackBerry, the pioneer of mobile e-mail, is no longer able to keep up with current developments on the market for smartphones it helped create.

“They have done some great things for the world of smartphones, but I think they’re on the ropes right now,” says Mark McKechnie, analyst with ThinkEquity in San Francisco. “They have a great messaging platform and device architecture, but they really haven’t made the shift to smartphones. They are getting displaced by two pretty powerful ecosystems in Android and Apple. People want more than just a messaging device now.”

Urlocker is skeptical as well. BlackBerry’s traditional strength – efficient and reliable mobile e-mail with watertight security – is less attractive to consumers than to corporate users, he argues. “What really matters in the consumer market is the quality of the software, the media content and the marketing. RIM has been weak on those three measures relative to Apple and Google.” 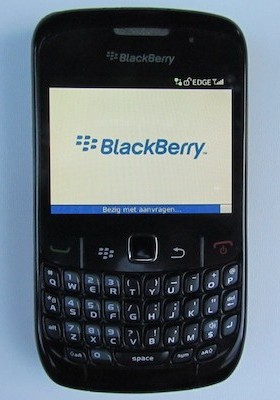 The cause of the stagnation is the fact that RIM has failed to release any new BlackBerry devices during the past year. That has to do with the development of the new operating system to replace BlackBerry’s existing software platform. The new operating system, developed by software company QNX, a RIM acquisition, should make BlackBerry more versatile. It is already used in RIM’s tablet device, Playbook, and has been praised for its power and speed.

But the integration of QNX into the smaller BlackBerry devices has been delayed. “In the last year or two, they have been playing catch-up,” says Barry Richards of Paradigm Capital in Toronto. “They are trying to make the products better but only improving them to the point where other companies were already at. So they stopped being a world leader.”

Still, it is not just doom and gloom at the Canadian technology giant. While optimists about the company’s future seem to be in the minority, some argue the reports about RIM’s imminent demise are overstated. “People overly dramatize it,” says Richards. “They were so successful for so long that you really couldn’t criticise them. Now that the gloves are off, people are going too far because there’s a lot of pent-up hostility towards the company.”

The main reason RIM will not soon falter is the company’s strong financial position, he argues. It is reinforced by the fact that the company, unlike its competitors, makes considerable money from data traffic to its devices. As the only producer of handsets that also channels messages through its own data centers, RIM receives five dollars per user per month from telecom providers. The carriers like to work with BlackBerry because RIM compresses messages efficiently.

Secondly, RIM has a strong base of business users. The company has a server presence in almost all companies of the Fortune 500 and beyond. Unlike consumers, corporate users are concerned about securing their mobile data traffic. That is BlackBerry’s core strength. Although there are business users who want to switch to iPhone, BlackBerry’s top-notch security is one major reason for companies to stick with RIM.

Thirdly, RIM still has strong growth outside North America. In the past fiscal year, the company nearly doubled its sales in the rest of the world compared to the year before, to $10.7 billion. RIM is now dependent on regions other than North America for more than half its revenues. But Urlocker predicts that international markets will also level off, due to the rise of cheap devices running on Android.

Finally, RIM is developing a new series of BlackBerry devices with the new operating systems from QNX. When those models finally come to market, many existing users are expected to switch to a new device. “Next spring, we could have four different types of BlackBerrys at all the different price points, with souped-up high-end technology,” says analyst Richards. “That would make for a much happier company.”

“The ecosystems of Apple and Android are growing dramatically”

RIM’s problem is that the launch of the new BlackBerry has again been postponed, to 2012. So the pain continues. And although the new devices are expected to represent a leap forward, the competition is not sitting still in the meantime. Android and iPhone are also coming up with improved devices – and they have many more apps, mostly produced by external software developers. For iPhone, there are 525,000 apps, for Android 400,000. BlackBerry has 35,000 apps.

For that reason, it will be an uphill struggle for RIM to make up for lost time, predicts McKechnie of ThinkEquity. “The ship has sailed,” he says. “On the consumer side, the ecosystems of Apple and Android are growing dramatically.”

Urlocker is not counting on short-term success for BlackBerry either. He believes the problem at RIM is deeper, and cannot simply be resolved with the launch of new models. “When you become very successful, it is really hard to innovate, because the innovations that are necessary require you to change,” he says. According to him, co-CEOs Balsillie and Lazaridis have a hard time recognizing that their success formula has stopped working. “I don’t have much faith that continuing to do the same old thing is going to result is dramatically improved results.”

The co-CEOs are frustrated by the negativity – and by growing calls for a change at RIM’s top. Shareholders have suggested changing the executive structure at the company. Balsillie and Lazaridis are serving as both co-CEOs and chairmen. Under pressure, they have agreed to set up a committee to assess the arrangement.

Balsillie defended the duo’s work this week before restless shareholders. “We’re trying broadly and in a balanced way to bring the company into a position so that it can continue to perform,” he said. “There are uncertainties associated with that. We’re working tirelessly, we can assure you. We’re not perfect, but we give our very best every day.”

According to analyst Richards, it may be good for RIM to take a dose of humility. “They’re in pretty good shape with the business, but they need to redefine themselves with the consumer. They have great people and formidable resources, and the founders are really smart guys. I think they definitely can come back from this.”

Research in Motion is a bargain. Due to the sharp decline in RIM’s share price, the market value of the BlackBerry maker has declined from a peak of about $80 billion in 2008 to less than $15 billion today. This year alone, the company’s value has been halved.

RIM’s market value now sits at five times annual earnings – a very low ratio. In the tech sector, the average market cap is 14 times earnings. Even a ratio of 10 is considered cheap.

Under those circumstances, a takeover of RIM is a real possibility. The company wants to remain independent, and the two co-CEOs together own 10 per cent of the shares. Still, companies including Microsoft, Cisco, Oracle and IBM are mentioned in the financial press as potential buyers.

So far, any advances have failed to materialize, perhaps because the timing is not good for some of the most obvious candidates. For instance, Microsoft, which might be a good fit because it is also strong in the corporate market, has formed an alliance with Finland’s Nokia. It also recently bought Skype.

It is also possible that potential buyers are hesitant to make a hostile takeover bid because they have the same question as investors: will RIM return to growth, or is BlackBerry in an irreversible downward spiral?