Canada is resisting efforts to curb international trade in asbestos, the building material that can cause cancer. The country, which prohibits its use, wants to continue to export the material to developing countries where it is still allowed. In the mining town of Asbestos, people are hoping for a revival of good times.

By Frank Kuin in Asbestos, Quebec

A retired yellow dump truck stands at the edge of Asbestos, not far from a sign welcoming visitors to the Quebec town. The monster equipment is a proud reminder of the industrial tradition of the town of about 7,000 people, named for the raw material that was mined here until recently from one of the largest open pit mines in the world.

Among locals, that material is nicknamed l’or blanc, or white gold. But worldwide, asbestos is infamous as a carcinogen. Since the 1960s, the material has been discredited because inhalation of its fibers can cause deadly lung diseases, including cancer.

Driving into Asbestos, it is hard to miss a gigantic crater, two kilometers in diameter and nearly 400 meters deep. For more than a century, this pit was a prime world source of asbestos – once hailed as a ‘magic mineral’ for construction purposes because of its strength and insulating properties. The open pit has been exhausted and production stopped in 2009.

Now, investors are hoping to revive asbestos production in a nearby underground mine that has largely been built. The operator of the mine wants to extract 200,000 tonnes of so-called ‘white asbestos’, or chrysotile, per year. It’s a controversial plan because most Western countries have banned the use of asbestos. The backers of the plan want to export the material to developing countries where it is still being used, including India, Indonesia and Mexico. 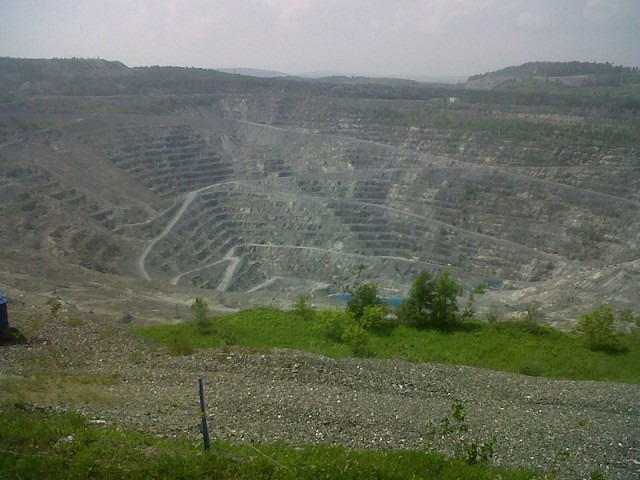 The large open mine in Asbestos, Quebec.

Residents of Asbestos, which has fallen on hard economic times, support the idea. “I hope the mine will open,” says Roland Marcotte, a sturdy man of about 60 years old. He has worked at the mine for 30 years as a trucker. “There is no other industry here, there is little work for young people,” he says. Moreover: “I am healthy and the risks are exaggerated. We were proud of asbestos.”

The plan for the mine is also backed by the Canadian government – even though the use of asbestos is prohibited in Canada. Prime Minister Stephen Harper sees no problem in supplying it to countries without such a ban. “This government will not put Canadian industry in a position where it is discriminated against in a market where sale is permitted,” he has said.

That position has drawn intense fire from opponents of asbestos. They say Canada is standing in the way of international efforts to curb the use of asbestos. Specifically, the country is blocking efforts to add chrysotile to the Rotterdam Convention, an international agreement on trade in hazardous chemicals.

If chrysotile is added to the list, as is being debated this week at a UN conference in Geneva, it can only be traded with consent of the importing country. Importers must be fully informed of the substance’s hazards and on precautions that must be taken to handle it safely (see sidebar).

“Canada is a strong fighter for the asbestos industry and plays a very significant role in undermining the convention,” says Kathleen Ruff, an anti-asbestos activist. “Canada is the biggest public health obstacle in the world on the asbestos issue, as the only country that knows well enough not to use it ourselves.”

There are countries that produce it and use it, she says. “At least Russia and China use the asbestos that they mine, which is tragic, but we certainly take the prize for hypocrisy.”

Amir Attaran, associate professor of Population Health at the University of Ottawa, goes a step further in his criticism, saying Canada is willingly exporting deadly lung diseases to developing countries. “Canada has obviously made a calculation between a small number of Canadian jobs versus killing foreigners,” he says. “It is clear that our government knows that this is killing people abroad. It is calculated homicide, carried out by a Canadian corporation with the blessing of Stephen Harper.”

Nonsense, say representatives of the asbestos industry. They say deadly applications of asbestos from the past, such as amphibole asbestos sprayed between walls for isolation, has long been abandoned. Chrysotile is now being used in a safe way by capturing it into other materials such as cement, they argue, so that fibers are not released into the air.

“You can make cement sheets which are fairly thin and very strong, ideal for roofing purposes, among other things,” says Guy Versailles, spokesman for the Chrysotile Institute in Montreal. “It is the perfect material for people who have to make do with less than $2 per day.” 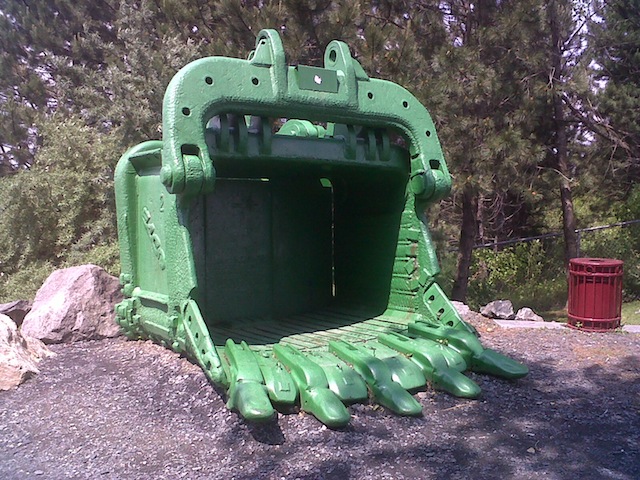 According to Versailles, the plan to include chrysotile in the Rotterdam Convention is a step towards a complete ban. “It would create a slew of new obligations,” he says. “It would amount to nothing less than a trade barrier, which is not warranted by the facts.”

Canada’s Minister of Industry, Christian Paradis, opposes inclusion of white asbestos in the Rotterdam Convention. “We know that it is carcinogenic, so we have to use it safely,” said Paradis, who is the MP for the electoral constituency that includes the town of Asbestos. “This is what’s being done here, and it can be done in the countries where we export it.”

Paradis spoke in the Parliament building in Canada’s capital Ottawa, which is undergoing renovations to remove asbestos that was sprayed between walls. That work is done by specialists in hazmat suits and oxygen masks.

“That was a bad use” of asbestos, the Minister said. “It was spread everywhere, and this is not the definition of a safe use. A safe use is to make sure that the fibre is encapsulated and cannot go back in the air.”

Activist Ruff thinks it is not realistic to assume that Canadian asbestos will be treated in a safe way in developing countries. Workers at a company in India that imports asbestos are reported to unpack the material with their bare hands, wearing handkerchiefs to their mouths. “That will kill a lot of them,” she says.

Ruff agrees with Chrysotile Institute spokesman Versailles that the addition of chrysotile to the Treaty of Rotterdam would be a step towards a ban – a welcome step, in her view. “If you let people know that asbestos is very hazardous, and that there are all kinds of complicated and expensive precautions that must be taken, people won’t buy it, because it makes it too costly.”

Back in Asbestos, chrysotile is not viewed as a dangerous substance. It remains the popular export product that was once the pride of Quebec, but that is always used synonymously with more dangerous forms of asbestos.

“We have quality of life, we’re healthy and we enjoy living here,” says Georges-André Gagné of the local government. “We’re kind of tired of always being told we’re spreading cancer around the world.”

Countries that have signed the Rotterdam Convention on the Prior Informed Consent Procedure for Certain Hazardous Chemicals and Pesticides in International Trade are meeting this week in Geneva. Like at two previous conferences in 2006 and 2008, they will discuss whether to include ‘white asbestos’, or chrysotile, to the list of substances covered by the accord.

The scientific Chemical Review Committee of the Convention has been recommending since 2006 to include chrysotile on the list. Chrysotile can cause fatal lung diseases, including lung cancer when fibers are inhaled. People who handle the raw material, such as construction workers, are particularly at risk if they do not take special precautions.

According to the World Health Organization, more than 100,000 people die each year worldwide from the effects of exposure to asbestos fibers.

More than 50 countries around the world have largely banned the use of asbestos.