Vancouver, the host city of the Winter Olympics, is bursting with Olympic energy and national pride. That is unusual for Canada. The country’s typical modest stance has made way for a hunger for medals. “Why don’t we have fun and try to be number one?”

Normally, he’s not one to do this sort of thing, Calvin Woodruff says apologetically. He is waving a Canadian flag on busy Granville Street in downtown Vancouver. “We are proud of Canada,” says Woodruff, a resident of the city’s suburb of Surrey. To remove any doubt, he is dressed in a red ‘Canada’ sweater; his wife is wearing a red and white hat with a Maple Leaf. “I’m cheering for all athletes, but mostly for Canada,” he says with a laugh.

They are not alone: a human sea of red and white has been filling the streets and squares of Vancouver. Wherever you go, from the Olympic flame on the north side of downtown to the hockey arena on the south side, to the suburb of Richmond with its Olympic speed skating oval, you are surrounded by a crowd of people decked out in Canada’s national colours: red Canada sweaters, red and white hockey jerseys, scarves, hats, mittens, Maple Leaf flags, red and white face paint and banners with “Go Canada Go!”

“The atmosphere is really good, this is the most patriotic spirit I have ever seen in Canada,” says Woodruff. “Sometimes Canadians aren’t at ease showing their patriotism, we’re known as friendly, but a little reserved and very polite. But we feel that this is a good time to bring it all out. We’re proud of the Games and how good our city looks. We feel that it’s a great time to share our country and our city with the world.”

Canadian sports fans decked out in the national colours in Vancouver.

Gone is the skepticism that prevailed in Vancouver in the run-up to the Winter Games. Vancouverites and Canadians in the rest of the country have embraced the Games as a reason to throw a Canadian party. Helped by the beautiful spring weather on the Canadian West Coast, the city is bursting with Olympic energy and national pride. The Winter Games have become the backdrop for 17 days of Canadian flag waving.

That is unusual for Canada. Other than on Canada Day, the national holiday on July 1, Canadians don’t often put national pride on display. Flag waving is something they tend to leave to their southern neighbours; bragging does not fit very well into the Canadian national character.

That national character is loosely defined at the best of times in a nation founded by two linguistic groups (English and French) that has grown into a multicultural society in recent decades. The broadest commonalities among Canadians are their ability to endure harsh winters and respect for cultural differences. Otherwise, Canadian identity is often defined by what it is not: American.

“Canada is very ethnically diverse,” says Curtis Smith, a Vancouver resident in the crowd in Robson Square, a hub for Olympic activities. He is wearing a Canadian flag as a cape. “But we all come together for the Games, that’s what it’s all about. We love to cheer for the little guy, we are the little guy. Canadians have a reputation of being overly polite, but you don’t often get an opportunity to root for the home team.”

The Winter Games are seen by organizers and political leaders in Canada as a building block in the national formation of the relatively young country. “It is Canada’s time to shine,” said Prime Minister Stephen Harper before the Games. “Let us hold our flag high,” he said, as “a cheerful red and white reminder of a quiet and humble patriotism that, while making no claims on its neighbours, is ever ready to stand on guard for itself. We will ask the world to forgive us this uncharacteristic outburst of patriotism, of our pride to be part of a country that is strong, confident, and tall among the nations.”

Indeed, this Canadian pride goes beyond the role as host country; Vancouver 2010 is also characterized by a remarkable Canadian assertion during the sports competitions. This is the third edition of the Olympic Games in Canada, after Montreal (Summer Games 1976) and Calgary (Winter Games 1988). Unlike the first two times, when no domestic athlete won a gold medal, Canada has abandoned the attitude of ‘glad you’re all here’ this time around. Canadians want to see medals, preferably more than a few. 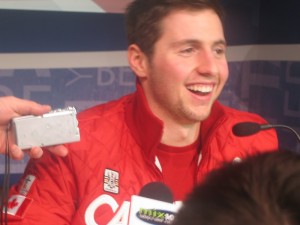 Under the name ‘Own the Podium’, Canada has invested $110 million during the past five years in training programs for elite athletes with medal potential at the Olympics. The aim is to achieve a better result on home soil than the best ranking Canada ever attained at the Winter Olympics: third place in Turin in 2006, with 24 medals. To the surprise of many, modest Canada unapologetically set an ambitious goal for Vancouver: first place in the medal standings.

“Should we have said: let’s be number 3, or let’s be number 2?” asked Roger Jackson, CEO of Own the Podium, during an interview with the CBC. “No, why don’t we have fun and try to be number one?” The program has funded first class training, technology and health care for elite athletes in disciplines such as speed skating, alpine skiing and snowboarding. “Just choosing that target has forced everybody to concentrate on really doing their very best.”

Not everyone in Canada feels at ease with the bravado of ‘Own the Podium’. Some find it ‘un-Canadian’. Bruce Kidd, a professor at the University of Toronto and a former Olympic track and field athlete (Tokyo 1964), finds the choice of the name “unfortunate”. “I love the ambition, and I love the idea of creating a program to help more of our athletes do really well,” he says. “But ‘owning the podium’ suggests a kind of hostility or unwelcoming spirit. When you’re hosting the world, that’s inappropriate.”

The ambitious stance of the Canadians has also provoked strong criticism from abroad. According to some, Canada has restricted access to the facilities such as the Richmond Oval and the Whistler Sliding Centre for foreign participants (Canada says that usual guidelines have been followed). A British critic even went so far as to blame the death of the Georgian luger, during practice on the opening day of the Games, on the eager Canadian stance.

Have the Canadian hosts in some ways gone too far in their national pride? Kidd doesn’t think so. “I don’t think it’s un-Canadian to go for the gold,” he says. “There’s certainly a strong commitment to excellence in people in every sphere [of Canadian society].”

“But to boast about it, to say ‘I’m better than everybody else’, it’s hard to generalize in such a diverse country,” says Kidd. “I think there is a huge current of people who would say: ‘I want to do the very best, I want to excel, but I don’t want to do it in an aggressive way or at the expense of other people’. That I would say is a very strong Canadian value.” 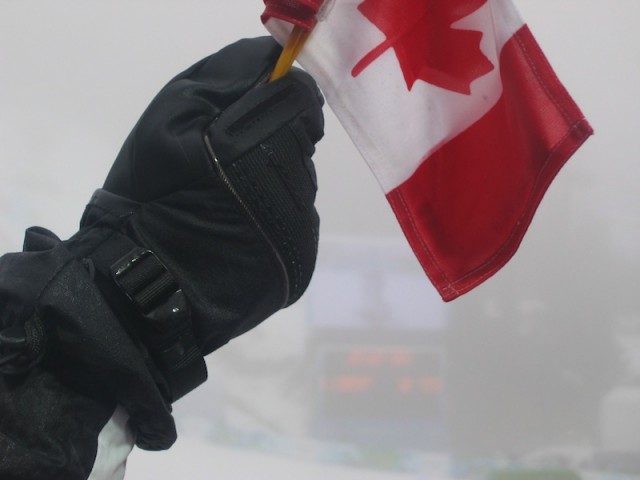 A spectator waves a small Canadian flag during the Winter Games.

Halfway through the Games, the results of ‘Own the Podium’ are mixed. Canadians have scored high marks in extreme sports such as snowboarding and freestyle moguls. But Canadian alpine skiers have not made it to the podium. In skating, Canadian women have won three medals in long track and one in short track; the men have so far come up empty-handed. In total, Canada now has nine medals, including four gold – well behind the leader in the standings, the United States.

Nathalie Lambert, chef de mission of the Canadian Olympic team in Vancouver, has nuanced the first place goal from the beginning. “It would be great, but I think what matters most is that we do better than we ever did before. So more than 24 medals would already be a success.” Canada had 24 medals at the Winter Games in Turin in 2006.

In addition, the cultivation of talent on home soil is in her view “a unique opportunity to create role models to really inspire people. For 17 days, we rally together. Every now and then we need to take a pause and have something like that, because it’s such a big boost for happiness and pride.”