Vancouver, host city of the Olympic Winter Games, is generally praised for its high quality of life. Rainy weather is often mentioned as the biggest drawback. The former logging post grew into a multicultural metropolis known for its nature, sense of community, and liberal social policies. A portrait of Vancouver.

It is raining and grey around False Creek, the waterway that separates downtown Vancouver from other parts of the city. Water is dripping from tents that have been erected on the north shore, near the covered BC Place stadium where the Opening Ceremony of the Winter Olympics will be held tonight. Pedestrians with umbrellas walk by, helicopters are hovering overhead.

The logo of the Olympic Winter Games in Vancouver is an inukshuk, a route marker of the Inuit people.

Across the water stands the brand new athletes’ village, its condo balconies decorated by residents with national flags. The village has views of the impressive skyline of the modern city on the West Coast against a backdrop of snowy mountain peaks. Except for the drizzly weather, it all looks spectacular – as things generally do in British Columbia, the Canadian West Coast province.

As the third-largest city in Canada, a winter country par excellence with its national passion for hockey, Vancouver seems a natural host for the Winter Games. The Canadian city on the Pacific Ocean, a young multicultural metropolis with a relaxed atmosphere and a West Coast liberal outlook, can hardly wait to finally become the focal point of the sports world after seven years of preparations.

This is somewhat ironic because of all cities and towns of Canada, Vancouver is actually among the least exposed to the country’s harsh winters. With its temperate climate, comparable to that of northwestern Europe, it is one of the mildest cities in Canada. Severe snowstorms like those that plague Calgary, Toronto, Montreal and Halifax are rare here. Indeed, the current winter is one of the mildest on record in Vancouver: not more than one inch of snow has fallen so far this year. 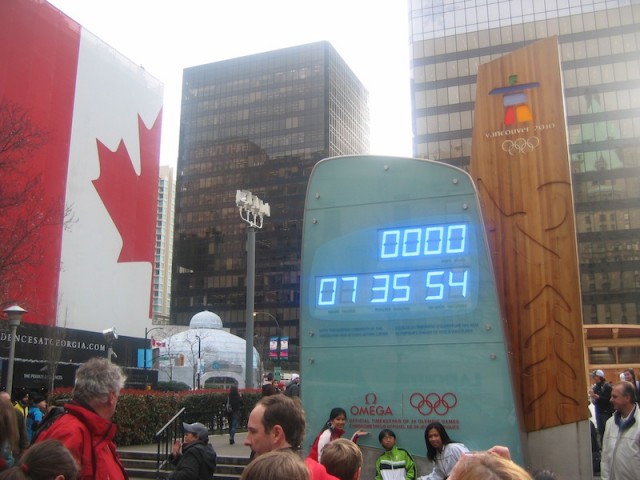 Countdown clock in downtown Vancouver, with only hours to go before the start of the Olympic Winter Games.

Rain, rain, and more rain is what you get in Vancouver – and that is often mentioned as the biggest disadvantage of the city, which is otherwise known as one of the best places in the world in which to live. In studies by international consultancies that rank cities for quality of life, Vancouver often comes out on top. Its winning combination: spectacular scenery, a favorable social climate, and Canadian social services such as universal health care.

“It is great here, we have the sea and the mountains, there is always something to do,” says Alex Babeanu, a Vancouver resident who is cycling along False Creek. He moved to Vancouver seven years ago from Paris, where he grew up, for his job in the software industry – and finds Vancouver compares favourably. “We have beaches, forests, you can go skiing, hiking, kayaking. The people are friendly and everyone’s involved in something or other, there is a strong sense of community. I was quite surprised by that.”

Aerial photo of Vancouver, with the city centre in the middle .

The natural environment, undeniably beautiful, is a defining feature of life in British Columbia (B.C.). Two-thirds of the province’s territory – an area as large as California and Florida combined – consists of woods, including rain forests with ancient cedars up to 50 meters tall. There are magnificent bays and fjords frequented by orcas, wild rivers teeming with salmon, fresh green forests inhabited by grizzly bears and eagles. Hence, the slogan on the license plates of cars in the province is simply ‘Beautiful British Columbia’. 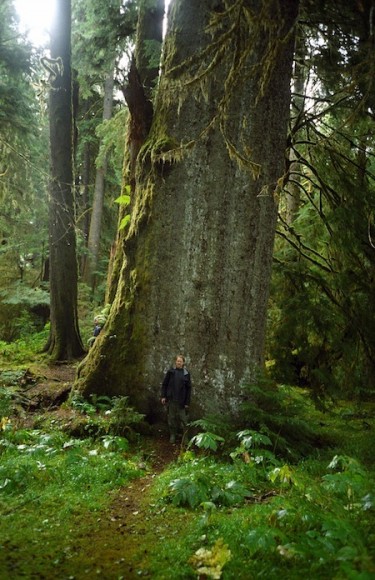 The author at the foot of a giant cedar in British Columbia.

The mighty Rocky Mountains are a natural barrier between B.C. and the rest of Canada. As a result, Vancouver was developed relatively late; until the end of the 19th century it was little more than a logging outpost of lumberjacks, counting about 1,000 inhabitants, near the intersection of the West Coast and the U.S.-Canada border, the 49th parallel. In the 1880s, a Canadian railroad was built to the town, which subsequently gained in importance because of its natural harbour.

Because of the relatively late contact, B.C.’s indigenous groups, known as First Nations, have never ceded the territory in land treaties as was common in earlier times in the more eastern parts of the continent. On paper, therefore, Vancouver is built on indigenous land. Although Indian-white relations are never free of irritants, First Nations people are involved in the organization of the Games. For example, the Olympic medals contain the characteristic, stylized shapes of the famous Northwest Coast Indian art.

The medals at the Winter Olympics in Vancouver have been designed with Northwest Coast Indian art.

The first whites who settled in the area were predominantly Anglo-Saxon, but in the 20th century the Canadian West also attracted a considerable number of immigrants from other European countries, including the Netherlands. One member of the Dutch community, Bill Vander Zalm, even made it to Premier of the province. In the 1960s, there was an influx of draft dodgers from the U.S. West Coast, who did not want to be conscripted for the war in Vietnam.

The draft dodgers brought a hippie culture, and a penchant for marijuana. Because of a natural environment for cannabis cultivation and the tolerant political climate in Canada, marijuana has in the last decades grown into the most important economic product of the province – more valuable than other important industries, including logging and tourism. Vancouver is the centre of an underground business worth billions of dollars in so-called ‘B.C. Bud’, the potent marijuana from the region. The city has been nicknamed ‘Vansterdam’ for its pot-friendly attitude.

More serious is the large problem Vancouver has with hard drugs. In the city’s so-called Downtown Eastside, the poorest neighbourhood in Canada, addicts and prostitutes roam the streets, and drugs are injected in laneways behind garbage containers. The area has the only safe injection site for intravenous drug users in North America. Addicts can go to the clinic to inject their drugs. The experimental ‘harm reduction’ initiative is meant to prevent the spread of diseases such as hepatitis and HIV. 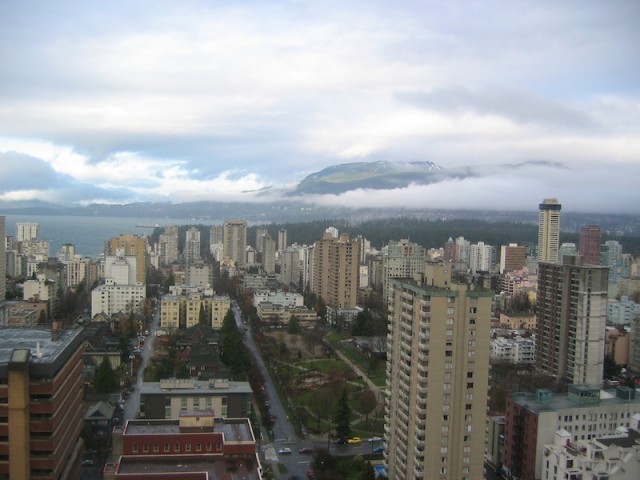 Vancouver on a rainy day.

In recent decades, the face of Vancouver has changed with an influx of immigrants from Asia, particularly from China and India. During the 1990s, a large number of Hong Kong residents came to the Canadian West Coast for fear of what might happen in the British Crown colony after its transfer to China in 1997. Many of them obtained their Canadian papers by investing in real estate. As a result, towering apartment buildings sprang up like mushrooms. It earned the city another nickname: ‘Hongcouver’.

Chinese influences are visible throughout Vancouver – not just in the old Chinatown with its traditional Chinese grocery stores, but especially in sprawling suburbs like Richmond, where roughly half the population is of Chinese background. Richmond is not only home of the Vancouver international airport and the Olympic skating venue, the Richmond Oval, but also of opulent Chinese shopping malls such as the Aberdeen Centre, with its expensive specialty stores for everything from electronics to sports cars.

“The diversity of Vancouver is great,” says Mark Chin, a young resident of Vancouver of Asian heritage. “We have all kinds of cultures from all over the world here. We are used to dealing constantly with people of all different races.” Chin is on a bicycle, he also likes to engage in outdoor activities such as mountain biking and snowboarding, he says. “I agree Vancouver is the best place in the world. You can’t judge Vancouver by the rain.” 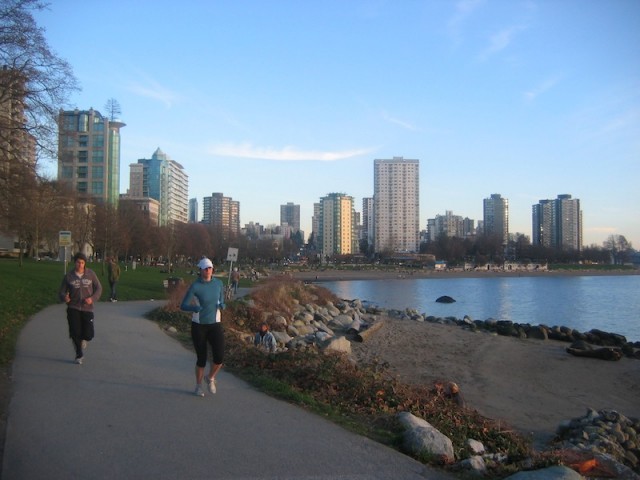 Joggers at English Bay in Vancouver.

Where does the name Vancouver come from?

The city of Vancouver is named after the British explorer George Vancouver, who mapped the surrounding area in the late 18th century. His ancestors came from the town of Coevorden, in the Netherlands. Their last name, Van Coevorden, became Vancouver when they migrated to England.

One Response to Winter Games in a spectacular, rainy metropolis