The border between the United States and Canada, traditionally known as the longest undefended border in the world, is increasingly looking like a fortress. A virtual wall of technology is being drawn up by U.S. Homeland Security. Critics see a “militarization of the border”.

Driving across the impressive Peace Bridge between Fort Erie, Ontario, and Buffalo, New York, motorists approach a gateway to the United States. The border crossing at Buffalo, with over 10 lanes for cars and trucks, is one of the busiest ports of entry on the northern border of the U.S. With about 20 meters to go before the customs and immigration booths, visitors from Canada enter the line of vision of Uncle Sam.

Traffic signs and flashing red lights warn you to stop. “All vehicles and persons are subject to search upon entry into the U.S.,” reads one sign. “Your actions and conversations are being recorded on videotape.”

Cameras record each license plate, a scanner verifies whether the car contains digital identification. Information about the vehicle and the identity of the owner appears on a screen in the customs officer’s booth before a word is said.

In addition, each lane has a radioactivity detector, designed to intercept uranium for bombs – and sensitive enough to determine if a passenger has had chemotherapy. Trucks are scanned like luggage at an airport. Officers have small cameras to look into fuel tanks.

When driving up to the customs and immigration booth, the motorist is being photographed prior to passport control and interrogation: “Where do you live? Where are you going? What are you going to do there?” 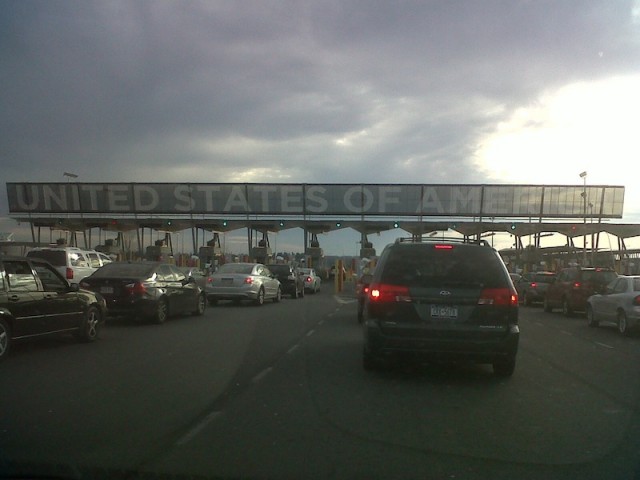 The border between the U.S. and Canada, traditionally known as ‘the longest undefended border in the world’, is beginning to look more like a fortress. Since the terrorist attacks of September 11, 2001, U.S. politicians have identified the nearly 9,000 kilometer northern border of their country as a weak link in securing the U.S. from terrorist attacks.

The days when the American-Canadian border was little more than a line on the map are gone. Although it’s not an option to build a physical wall on the northern border, like the U.S. is building on its border with Mexico, from a Canadian perspective it is clear that a virtual wall of technology is being drawn up.

The scanners and detectors at the border were installed after 2001. Along unmanned parts of the border further inland, between North Dakota and Manitoba, motion sensors and unmanned spy planes are deployed. Also, U.S. customs personnel along the northern border has increased since 2001 from 350 to 1,600 officers. Critics see a “militarization of the border”.

Perhaps most awkward for Canada is that the northern border recently lost a cherished privilege: no one can cross the border without a passport. Until recently, a driver’s license sufficed, or even a verbal declaration of citizenship, to drive into the U.S. from Canada.

“The documentation requirement was a weakness of the northern border”

But under the Western Hemisphere Travel Initiative (WHTI), an initiative from the Bush era that came into force this summer, all entrants along the northern border must now have a valid passport, just like at all other points of entry to the U.S. (some exceptions are made for so-called passport cards and chip cards for people who cross the border often).

“The documentation requirement was a weakness of the northern border,” says Officer Kevin Corsaro of the U.S. Customs and Border Protection. People could show many different kinds of birth certificates from all states and provinces and it was difficult to verify their authenticity, he says. If everybody has a passport that can be scanned quickly, it makes the job easier.

“These measures are helpful to make our country more secure,” says Corsaro. “Our primary mission is the war on terrorism, and the threat is no less on the northern border than it is along the southern border.”

In Canada, which considers itself a close ally of America, that view is raising concern. Ever since 9-11, there is a notable difference of emphasis between the two countries when it comes to their common border: Americans think first and foremost about security, Canadians about openness and trade. The two countries maintain the largest bilateral trade relationship in the world – about $1.6 billion worth of goods and services crosses their border every day. Canada wants to keep the border as open as possible, like the European model. 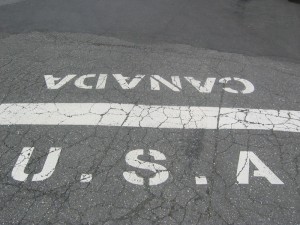 Border between the U.S. and Canada.

A common policy on who enters North America has been suggested – a perimeter around the continent that would erase the internal border. But there is little progress on that idea, for several reasons. Canadians are reluctant to give the U.S. control over its immigration and customs policies. Americans believe that Canada is too lax in its entry practices. For instance, Canada doesn’t lock up asylum seekers, and has fewer visa requirements.

“The fact of the matter is that Canada allows people into its country that we do not allow into ours,” Secretary of Homeland Security Janet Napolitano said recently. “That’s why you have to have a border, and you have to have border policies that make sense.”

Travelers on the Canadian side of the border have mixed feelings about the new passport rule. Douglas Cameron from Toronto finds the measure “silly”. He rejects it with irritation as a symptom of the “paranoid and insular worldview” of the U.S.

Others say they can live with it. “It doesn’t bother me, I always travel with my passport,” says Jason McMullen from Ontario, in line to enter the United States. Ryan Graham from California also thinks it’s a good idea: “It seems more secure, and it is still far more orderly here than at the southern border.”