Activists from Seattle hoped to block the departure of an oil rig Shell wants to use for oil drilling in the Arctic. But a small fleet of kayaks proved no match for the giant platform as it set sail for Alaska. “We have made our point well,” a kayaktivist said.

By Frank Kuin in Seattle

Before sunrise, opponents of oil exploration in the Arctic mobilize near the port of Seattle, following a nightly alarm by text: the giant Polar Pioneer oil rig, which has been in the port since last month to prepare for exploratory drilling in the Arctic Ocean, is about to leave for Alaska.

Several dozen ‘kayaktivists’ take to the water of Elliott Bay around dawn to block the exit of the port’s Terminal 5, hoping to prevent the departure. In kayaks bearing flags with the text ‘Save the Arctic’, they form a line across from the dock – the culmination of weeks of protests in Seattle against plans by Shell to drill for oil in the remote Chukchi Sea this summer. 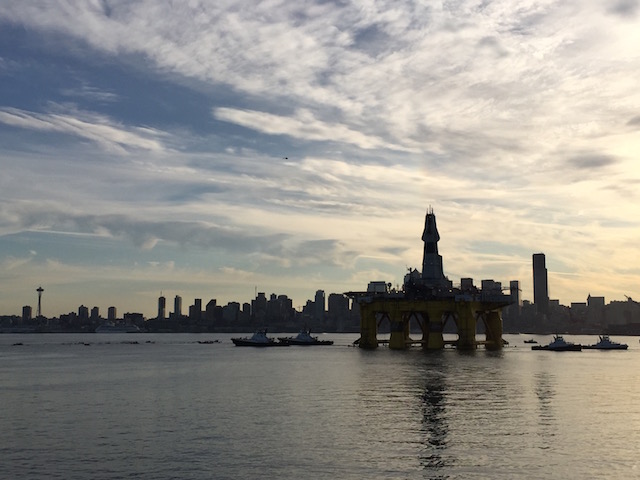 The Polar Pioneer drilling rig is moved from the port of Seattle..

When the Polar Pioneer is slowly set in motion by daylight around 6 A.M., however, it quickly becomes clear that the kayaktivists of Greenpeace and others can do little to stop it. Helped along by four tugboats, the platform is moving slowly but steadily into the bay, in front of Seattle’s modern skyline. Helicopters fly overhead.

“It is overwhelming how big it is,” says Vivien Sharples, who has gone on the water with a partner in a double kayak. “It’s very sad to see it moving, knowing what it is going to do.”

Coast Guard and police boats in the fleet in front of the rig warn the kayaktivists that they should stay out of a safety zone of 500 yards (about 460 meters) from the moving platform. Whoever does not risks arrest. More than 20 kayaktivists are detained. Some of them don’t cooperate and are physically pulled from their kayaks. Among those arrested is Mike O’Brien, a Seattle City Council member and outspoken critic of Arctic drilling.

“There is no good justification for drilling in the pristine Arctic,” says Mandy Varona from Seattle, who went on the water in a small boat. “You have to be pretty arrogant to go into the Arctic, without caring what others think. I don’t know what Shell is hoping for, they’re generating a lot of bad will. Hopefully they will realize it’s not worth it.”

“There is no good justification for drilling in the pristine Arctic”

Opponents of Shell’s drilling program in the Chukchi Sea off Alaska warn of the chance of an oil spill in the fragile Arctic region, where there are no deep-sea ports or Coast Guard stations. It would be very difficult to fight an underwater oil leak, like the Deepwater Horizon spill in the Gulf of Mexico in 2010 – especially when the sea freezes over in the fall.

Shell says that it will be drilling at much shallower depths and under much lower pressure than was done in the Gulf. The oil company is bringing its own emergency response vessels to deal with any leaks.

Critics also contend that the oil reserves in the Arctic region, which include an estimated 90 billion barrels, should be left in the ground if the world wants to take action against climate change. “We have to end our dependence on fossil fuels, and we have to end it now,” says John Sellers, one of the organizers of the protests. “Continuing will lead to catastrophic climate change.” 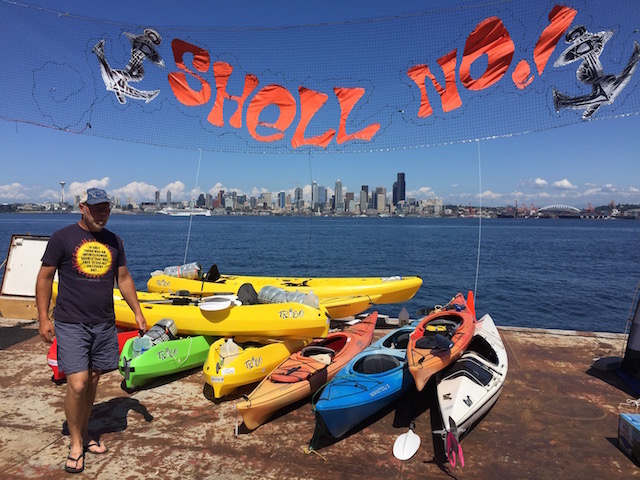 Activist John Sellers on the ‘Solar Pioneer’, a protest barge in Elliott Bay.

Sellers is staying in Elliott Bay on a barge dedicated to alternative energy, called ‘Solar Pioneer’. It has been a floating base for kayaktivists, right across from the oil platform. He describes the drilling rig as “a technological achievement for a morally bankrupt purpose.”

About 90 minutes after setting sail, the Polar Pioneer has been guided from Elliott Bay into the wider Puget Sound. The rig is scheduled to join a fleet of about 30 ships in Alaska in early July. “We remain committed to operating in a safe, environmentally responsible manner and look forward to exploring our Chukchi leases in the weeks to come,” said Curtis Smith, spokesman for Shell Alaska, following the successful departure.

“Things have changed because of what we’ve done here”

The activists return to shore disappointed. “We were in retreat,” says Sharples. “Personally, I thought it would be very difficult to stop it. But we have made our point really well. The eyes of the world are on Shell. Things have changed because of what we’ve done here. The tide is turning.”

Kayaktivists form a circle and express anger and sadness about the result of their action, which had been prepared for weeks. Once more, they yell their battle cry: drilling in the Arctic? “Shell no!” Then it’s time to clean up the kayaks and dismantle the protest tent.

In the distance, the rig is heading towards Alaska.