Shell sees the deep sea port of Seattle as an ideal base for its fleet to explore for oil the Arctic. But many people in the city on the West Coast are opposed to the company’s plans. ‘Kayaktivists’ want to stop the impending departure of Shell’s oil rig for Alaska.

By Frank Kuin in Seattle

In a small kayak with the words ‘Protect the Arctic’ printed on the top, Carlo Voli paddles towards the Polar Pioneer, a giant oil rig that Shell plans to use for exploratory drilling in the Arctic this summer. The platform, with its yellow base on massive poles and its derrick extending 120 meters high, has since last month been moored in the Port of Seattle, across from the modern skyline of the city.

Voli leads a group of activists in kayaks, or ‘kayaktivists’, during a training session for protests in Seattle’s Elliott Bay when the rig departs for Alaska. They want to block the departure, which is expected any day. Kayaktivists learn emergency manoeuvres, like what to do if someone capsizes. “Safety comes first,” says Voli, who is counting on a large fleet of kayaks when Shell makes its move. 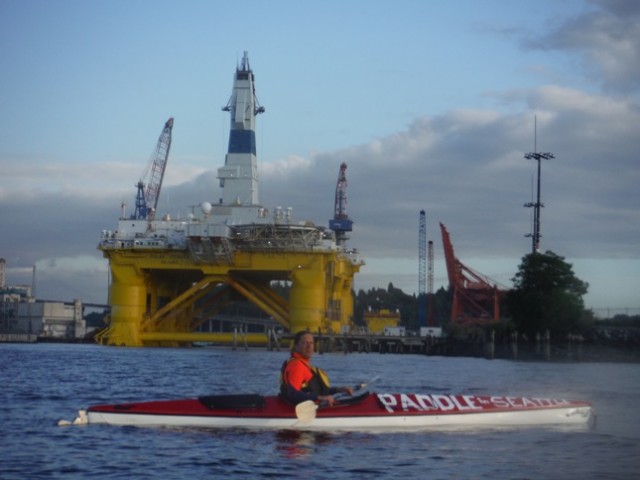 Kayaktivist Carlo Voli in his kayak in front of the Polar Pioneer drilling rig in the port of Seattle.

On the brightly coloured colossus emerging from the water at Terminal 5, hundreds of port workers have been busy preparing the rig, owned by contractor Transocean, for its mission in the Chukchi Sea. Shell received permission from the Obama administration this spring for exploratory drilling in the remote Arctic region for the first time since 2012. The region is home to as much as 90 billion barrels of crude oil, according to the Geological Survey of the United States.

“We’re loading out our drilling rigs and supply vessels, including everything from drilling pipe and casing to drilling chemicals and groceries,” says Curtis Smith, spokesman for Shell Alaska. The oil company is leading international efforts to extract oil from the remote Arctic region, which poses many challenges. “Once we’re confident that the rigs and crews are ready to sail north, they will do so sometime around mid-June.”

“We have to make a change, Seattle is where we are resisting”

Shell sees the deep sea port of Seattle as a good base for annual missions to the remote region north of Alaska, where there are no port facilities. Due to ice and weather conditions in the region, drilling can only take place for three months of the year, from mid-July to mid-October. Then the sea freezes over and the drilling fleet has to leave. Shell has chosen Seattle as home base and wintering place for its Arctic project.

That plan hasn’t gone over well in Seattle, however. The metropolis on the Pacific Northwest coast considers the presence of the rig as a blemish on its reputation as a green city with sustainability as a high priority. Environmental activists and the city of Seattle have launched a spirited campaign to thwart Shell at the local level – despite federal permission for the company’s plans.

The oil rig Polar Pioneer in the port of Seattle, across from the city’s skyline.

Several hundred demonstrators in kayaks took to the water of Elliott Bay last month to “unwelcome” the Polar Pioneer to the city when it was brought into the port. The protest was nicknamed ‘Paddle in Seattle’, a reference to the infamous ‘Battle of Seattle’ during a WTO meeting in the city in 1999 – the first big revolt against globalization and a legendary expression of the activist mentality of the city.

“There’s only so much carbon we can burn before the climate gets too hot,” says protester Karen Farnsworth, a Seattle resident. “Oil is the past, clean energy has the future. But big corporations just keep going. We have to make a change, Seattle is where we are resisting.”

Opposition to Shell is not limited to environmental activists; the municipal government is also working to thwart the oil major. “I am appalled that they would think to use Seattle and that somehow we’d be tied up into this,” says Seattle City Council member Mike O’Brien at City Hall. He calls the drilling platform “a monument to the hubris of the oil industry.”

O’Brien, a leading member of the Sierra Club before he went into politics, agrees with environmental organizations’ arguments against oil exploration in the Arctic: there are no facilities in the remote region to deal with a possible oil spill. Moreover, opponents say the oil should be left in the ground if the world wants to take action against climate change.

According to Shell, which is bringing its own emergency response vessels, the oil is needed to keep supplying the growing world population with energy in the coming decades.

“There’s no rational world in which a melting ice cap means we should drill more oil,” O’Brien argues. “What Shell is trying to do in Seattle is to make our dependence on oil so much greater. And I completely reject that on Seattle. We don’t want Shell here. I will make sure we’ll do whatever we can to stop Shell from using Elliott Bay as their home port.”

The city has limited means at its disposal to achieve that. Permits are being challenged, and pressure is building on Seattle’s Port Commission, an elected body, to deny Shell permission to stay in Seattle for an extended period of time. A meeting of the Port Commission was disrupted by protesters this week. Shell Alaska’s Smith points out that the company’s contract with the Foss shipyard in Seattle is valid. 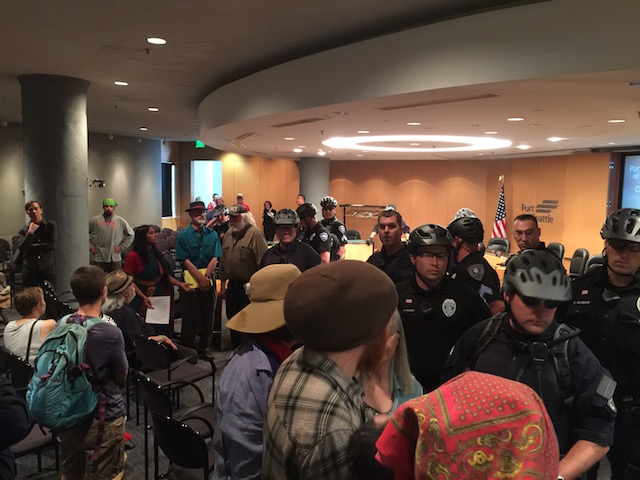 A meeting of the port commission was adjourned this week after interruptions by protesters.

Nevertheless, the resistance is fitting for a city that has chartered its own course on environmental and climate policy for many years. Seattle was the first city in the United States to pledge that it would pursue Kyoto Protocol objectives on reduction of greenhouse gas emissions, after the George W. Bush administration rejected the international climate pact. The city came up with its own climate plan – an example followed by more than 1,000 other U.S. cities and towns.

“There is a strong culture and politics of environmental protection here,” says KC Golden, senior policy advisor for Climate Solutions, a Seattle-based non-profit organization. He points out that most of the non-transportation energy needs of Seattle are met by renewable sources such as hydro power. “Part of the reason that we are relatively clear and resilient in our opposition to extending oil dependence and oil exploration is because we really do have a clear sense that there is a better alternative, and we’ve made a lot of commitments to building that alternative.”

Now, Seattle rejects federal policy on Arctic drilling. “I think some of this grows out of a sense of frustration with national leadership on climate issues,” says Eric de Place of the Sightline Institute in Seattle, a think tank on energy, economic and environmental policy. The Obama administration’s green light for Arctic drilling is “a huge black mark on his environmental record,” he says. “This is the option we have available to us: try to fight this stuff on a local level.”

The activists on Elliott Bay believe in that approach. “We realized we can have a disproportionate effect if we can actually stop some of these projects,” says kayaktivist Emily Johnston. “We don’t want to be complicit in this project. We don’t want it to happen at all. The government has failed us. We have to take action, because nothing is happening fast enough.” 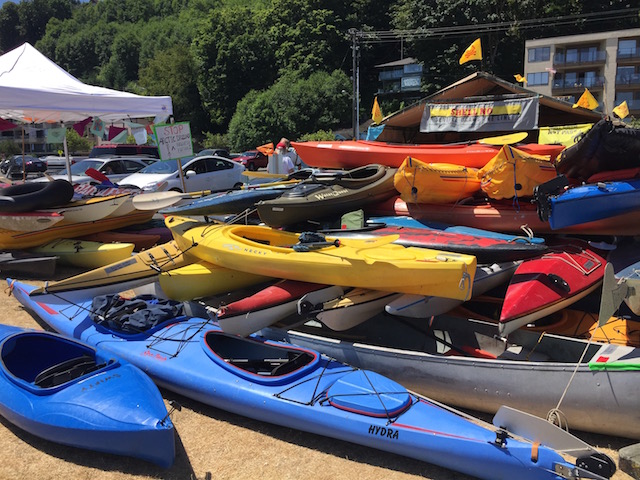 Kayaks ready to be used to go onto the water of Elliott Bay.

When will Shell set sail for Alaska?

The exact date of the departure of the Polar Pioneer drilling rig from Seattle to Alaska is not known. Shell has said it aims to leave Seattle in mid-June.

The oil company’s exploration fleet of about 30 ships, including supply ships and emergency response vessels, is scheduled to muster at Dutch Harbor, Alaska, in early July.

From there, weather and ice conditions permitting, it will make its way through the Bering Strait to the so-called Burger Prospect in the Chukchi Sea, a possible large oil reserve.