Severn Cullis-Suzuki still has hope for the environment

The Canadian environmental activist Severn Cullis-Suzuki gained international fame at age 12, when she addressed the Eart Summit in Rio de Janeiro in 1992. More than 20 years on, she is still committed to the cause of sustainability. “It’s great to have a story that inspires people.”

As passionately as ever, Severn Cullis-Suzuki voices her concern for the environment. The Canadian activist who has been advocating for greater sustainability since childhood still brings the same conviction to the issue that she showed when she first appeared on the world stage as a young girl. From the Canadian province of British Columbia, she speaks with passion about the nature in her home region on the North American west coast, stressing the need to protect such natural wealth for future generations.

Despite her young age, 34-year-old Cullis-Suzuki is already a “wise old veteran” of the green movement, she remarks jokingly. The Canadian biologist, who lives with her husband and two young sons in Haida Gwaii, an archipelago off the coast of British Columbia, knows from experience that environmental awareness is about more than saving the planet. Sustainability is also a matter of human health, happiness and leading a good life, she says. “Things that are bad for the planet are also bad for us.”

For more than 20 years, her life has been focused on spreading that perspective and supporting ways in which people can contribute to sustainability. Along with her environmentalist parents, David Suzuki and Tara Cullis, as well as her younger sister Sarika, she has been deeply committed to the green cause. “We’re constantly looking for answers to pretty much the same questions: How can we bring upon the change to sustainability quicker? How can we make sure that it’s deep enough? How can we create change in the world?” 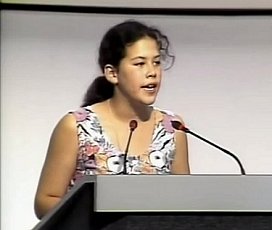 Severn Cullis-Suzuki speaks at the Earth Summit in Rio de Janeiro in 1992.

Questions like these have been posed by Severn since her youth. Over 20 years ago, when she was 12 years old, she gained international fame when she made a passionate plea to the United Nations about environmental protection. For six minutes, she spoke at the historic Earth Summit in Rio de Janeiro, the first international conference on sustainability. She left the adults in the audience speechless with an urgent appeal to take greater care of the environment, telling them: “If you don’t know how to fix it, please stop breaking it.”

The memorable speech made a lasting impression on a global audience, launching Severn into ongoing involvement in international efforts to promote sustainability. She speaks about all aspects of the concept – big themes like climate change, global warming and the chronic international dependence on fossil fuels. But she also emphasises environmental awareness on a small scale, pointing to local and individual initiatives to reduce pollution.

Indeed, Severn Cullis-Suzuki sees herself primarily as a “concerned citizen,” she explains. “I am someone who really believes that each individual counts, and we are part of changing the world every day, for positive or for worse. I keep trying to reduce my own footprint and help grow the positive movement, those are my guidelines.” 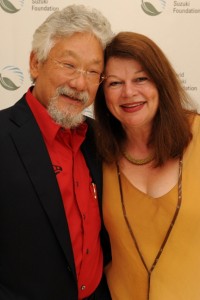 From early childhood, Severn was exposed to an activist mentality at home. Severn’s father, scientist and broadcaster David Suzuki, is a famous environmentalist in Canada and beyond. For decades, Suzuki (78) has hosted a popular documentary series with the Canadian Broadcasting Corporation, The Nature of Things. Since 1991, he has led his own environmental organization, the David Suzuki Foundation. Severn is on the foundation’s board, along with her mother and sister.

Indeed, social engagement was always a theme in the Cullis-Suzuki household. “My parents from a very young age always participated in annual peace marches, because the idea that we have to keep up our vigilance for peace was so close to them,” says Severn. “They were always involved in demonstrations for democracy and civic engagement, and with environmental work and challenges in the 1980s, when environmental activism was very popular.”

At the same time, Severn and Sarika developed a strong bond with the natural environment in British Columbia. “It was a huge part of our childhood to spend summers being outside a lot, we always went camping and did a lot of fishing,” she says. “I totally fell in love with the outdoors. My parents definitely facilitated that love. But that love of nature combined with a sense of responsibility, especially when my sister and I heard about different issues from my parents.” 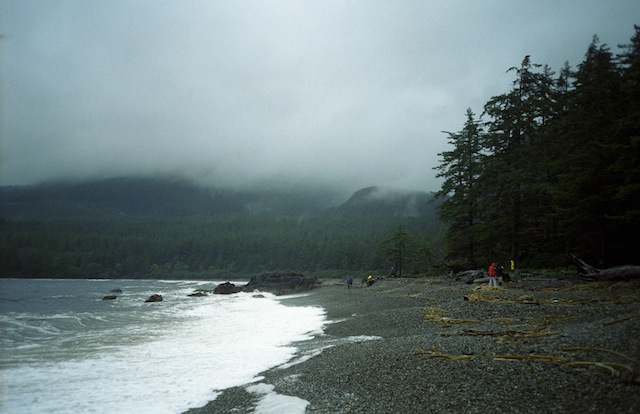 Coastline in Haida Gwaii, the archipelago in British Columbia where Severn Cullis-Suzuki lives with her family.

After a trip with her parents to the Amazon area in Brazil, where she learned about deforestation through  intentionally lit fires, she decided with some girlfriends to establish an environmental club for children, the Environmental Children’s Organization (ECO). They undertook small-scale projects such as beach clean-ups. Then they heard about an impending high-level meeting on sustainability, organized by the United Nations: the Earth Summit of 1992 in Rio de Janeiro.

Severn immediately felt drawn to the event. “We thought there needs to be someone there to remind those leaders of what is truly at stake, and who is actually going to be affected by the decisions they are going to make. And so we thought: let’s go and be that voice!” A fundraiser was held, and enough money was raised to send five children and a supervisor to Rio in June 1992. Severn’s parents decided to go along.

“I’m only a child, and I don’t have all the solutions”

At the summit, the children registered their group as a non-governmental organization, which allowed them to set up a booth at the ‘Global Forum’, an NGO conference at the summit. “We had a bunch of photocopied pamphlets and we stood there every day from 8 a.m. to 5 at night for two weeks,” says Severn. “And we found that what we thought was our weakness, which is that we were just children, actually turned out to be our strength. Because that’s why people were interested in us, that’s why people came by our booth. That’s why media wanted to do interviews with us, because we were very unusual.”

At the end of the conference, a speaker dropped out at the plenary session. “We got a phone call from the UN: we were given five minutes to speak to the world representatives,” she says. “So we raced there in a taxi, scribbling what was our final message to the UN, and ran into the plenary session. And I was able to give my speech.”

“Hello, I’m Severn Suzuki, speaking for ECO, the Environmental Children’s Organization,” she began, in a clear and commanding speaking style. “We’ve raised all the money to come here ourselves, to come 5,000 miles to tell you adults you must change your ways.”

The speech was rewarded with prolonged applause. Some delegates gave a standing ovation as Severn and her friends left the stage and walked through the plenary room.

“It’s a story of a child speaking truth to power”

Severn had no idea how lasting that impression would be. Footage of the speech went around the world, and she received invitations to speak abroad. People requested copies of the speech on video. A few years later, it appeared on the Internet; it can be seen on YouTube. It gave Severn a lasting reputation as ‘the girl who silenced the world for five minutes’.

She is proud of that. “It’s fantastic, it’s great to have a story that inspires people,” she says. “People always know me from that one moment, and that’s pretty incredible.”

That reputation, coupled with her continuing involvement, has given her a permanent role as an advocate for sustainable development. In 1997, she was invited to participate in the committee that worked on drafting the ‘Earth Charter’, a statement of ethical principles for global sustainability, socio-economic justice and peace. Severn is a member of the International Council overseeing the initiative.

In addition, she acts as a promoter of sustainability in her own right, by drawing attention to the theme in the media and as a public speaker. She has a talent to inspire her audience and create enthusiasm for the cause. “It is affirming for a lot of people to see that I’m still engaged, now as an adult,” she says. “It’s been over 20 years and I’m still in there, I still have hope.”

Even so, her perspective has changed considerably since her speech at the Earth Summit. Whereas in Rio she was convinced that world leaders could solve environmental problems if they only listened to her plea, in the years and decades that followed, she increasingly considered that an illusion. She attended the follow-up conferences in Johannesburg in 2002 and again in Rio de Janeiro in 2012 (‘Rio +20’), and thoroughly adjusted her views on environmental issues and the best way to achieve solutions.

“When I was a child I thought if I could just get through to the world leaders, that they were the ones who were going to make a difference,” she says. “Then as I grew up, I started to see that the world leaders weren’t actually capable of changing. At Rio +20, I realized that the political leaders don’t have the power at all. The corporations have governments in their back pocket.”

As a result of globalization, people have lost their direct relationship with their natural environment, she argues. Especially in the North American consumer society, people are ‘disconnected’ from production of their food and possessions and see unbridled consumption as the highest form of development. “That has allowed us to abuse the earth, because we don’t have to deal with the consequences.”

The pursuit of endless economic growth is the overwhelming mandate of politicians, Severn observes. Not least in her own country. The Canadian government is promoting the expansion of oil extraction from the vast tar sands of Alberta, a relatively dirty form of heavy oil. In Severn’s view, that flies in the face of Canada’s reputation as an environmentally conscious country. “We say we care about the environment, but our actions are totally opposite.” 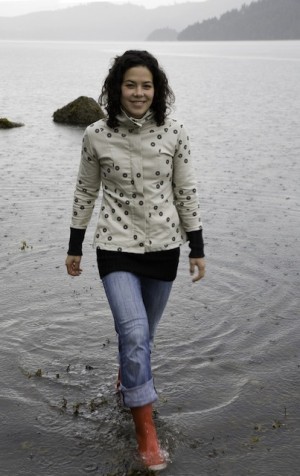 Rather than expecting steps to achieve more sustainability from politicians and world leaders, Severn has pinned her hopes mainly on ordinary people, on a small scale. She strongly resists the idea that major environmental problems like climate change are too large and inscrutable to tackle with small, individual measures.

“We are so globally focused now, we tend to say local actions are small. But I actually think they are pretty  huge. Climate change is a global issue because of so many small habits. All these little actions have added up to this thing. We’re talking about systemic habit changing.”

As a girl, speaking in front of the UN, she already said: “I’m only a child, and I don’t have all the solutions.” As an adult, she came to realize that there is no one magic solution to the environmental problems of the world. Rather, it is a variety of small improvements, step by step. “We’re all looking for a silver bullet, but it’s going to be more like a silver buckshot.”

Younger generations still have a leadership role to play in the goal to improve the world, Severn argues. “We desperately need our younger generations to continue to be spokespeople for the problems and to remind the adult generation what is truly at stake,” she says – just like she did as a 12-year-old. “And I believe this is happening. With social media, we have a vehicle for children to speak out all over the place. Every time, it is so powerful.”

This is an edited version of a chapter from the book ‘Children who changed the world’, published by PixelPerfect in November.

Tagged with: Children who changed the world • Haida Gwaii