Downtown Toronto has had it with Rob Ford, the mayor who has fallen into disrepute because of his admission that he smoked crack cocaine. But in the suburbs of Canada’s sprawling metropolis, Ford remains popular. A tale of two Torontos.

Surrounded by security guards and chased by a horde of reporters and camera operators, Rob Ford makes his way to his office at Toronto’s City Hall. Some bystanders yell expressions of support to the mayor of Canada’s largest city: “We love you, Mayor Ford!” And “Go get ’em, Robbie!”

Reporters are firing questions at the corpulent mayor, who is wearing his chain of office: What steps does he think Toronto’s city council will take against him at its meeting this week? And is he planning to take a leave of absence to deal with his personal problems? “I’m not going anywhere, believe me,” is all Ford has to say, before he escapes the mad crush and disappears behind the doors of his office. 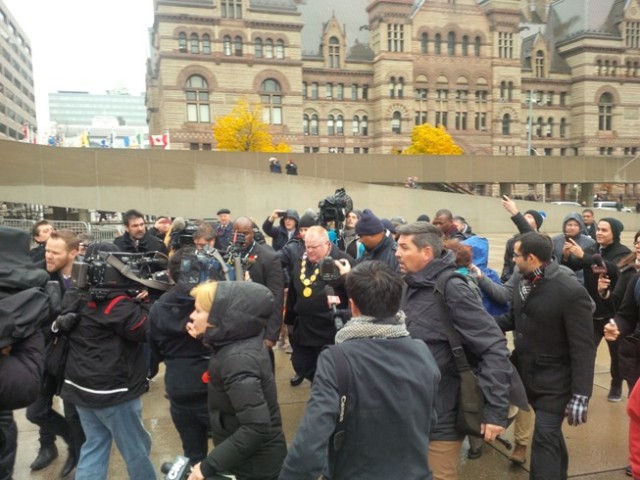 As if nothing is wrong, Ford has just given a speech at the War Memorial in downtown Toronto at a ceremony to mark Remembrance Day – his first public appearance since admitting last week that he has smoked crack cocaine and the release of a secretly taped video showing him on a wild rampage, threatening to kill someone.

Something is definitely wrong – and Toronto is bracing for further revelations about the now infamous mayor. Canadian media link him to drug dealers. A personal friend of Ford’s has to appear in court on charges of marijuana trafficking and extortion in relation to a video in which Ford is allegedly seen smoking a crack pipe. The video fell into the hands of police this year when a drugs and weapons gang was busted – eventually leading to his startling admission after months of denials.

Ford, a conservative who has vowed to fight violent, drug-related crime in the city, has even been captured personally on police surveillance footage. He was filmed during nightly meetings in parking lots in which packages were exchanged. Investigators tapped his phone. Ford has not been arrested or charged with any crime, but appearances are increasingly against him.

“He is an embarrassment to Toronto”

“He is an embarrassment to Toronto,” says Ed Zwolinski, a Torontonian on Nathan Phillips Square in front of City Hall. “I’d be ashamed if he was a tow truck driver for the city, but he’s our mayor. I am a school teacher, my behaviour has to be in accordance with strict rules, and I accept that. He should not be allowed to continue on, we should not tolerate it.”

Many in Toronto agree. “My chief concern is the extent to which the scandal interferes with his ability to do his job,” says Bob Seon, another citizen. According to councillor Denzil Minnan-Wong, the mayor “can’t speak with any type of moral authority on the issue of crime and safety or on the issue of drug use.” Newspapers including the Toronto Star and the Globe and Mail have called for his resignation.

But resignation is not on Ford’s mind – and there is hesitation about what should be done if he doesn’t go voluntarily. There is no mechanism to fire the elected mayor. That’s never been necessary in Toronto, a city that has been described as ‘New York run by the Swiss’ because of its size and relative orderliness. Nor does the province of Ontario, rooted in Loyalism to the British Crown, exactly have the removal of authority figures in its genes. 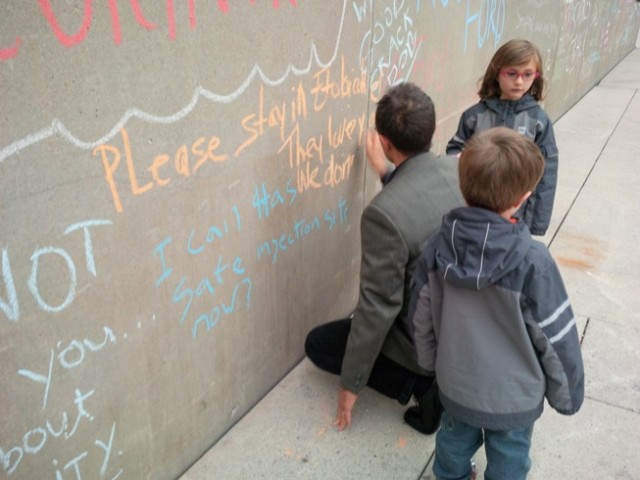 Ed Zwolinski expresses his protest in chalk on a wall in Toronto’s Nathan Phillips Square.

Perhaps more importantly, there is reluctance to take on Ford because of his considerable popularity in Toronto’s sprawling suburbs. In those parts of the city, nicknamed ‘Ford Nation’, he is known as the champion of the common man, who successfully offers counterbalance to the fashionable downtown elite.

His supporters don’t care for yoga practitioners and latte drinkers who act as though they know best. Ford proudly defies political correctness and promotes a conservative fiscal agenda not unlike that of the Tea Party in the United States. The more he is slammed by his critics, the more his supporters adore him.

“He is a good mayor, he’s doing a good job,” says Ray Edwards from surburban Etobicoke, Ford’s hometown. “What he does in his own time is up to him. He is being responsible with taxpayers’ money. His predecessor was irresponsible; he left billions of dollars in debt. How is that not a bigger story than what Rob does on his own time? But nobody says anything about left-wingers. The liberal media always have it in for Ford.”

“What he does in his own time is up to him”

The gap between rich, trendy urbanites and ordinary folk in the suburbs who don’t share their progressive priorities has been widening for years in Toronto, a metropolis that’s been growing rapidly. Ever since the city was amalgamated with a number of large suburbs in 1998 to one ‘megacity’, the suburb-dwellers are in the majority – an inconvenient fact that led to the improbable election of Ford as mayor in 2010. The next municipal elections are a year away.

The controversy over Ford has sharpened the divide. “It’s the people in the suburbs,” says Zwolinski. “They love him because he appeals to the suburban mindset.” He takes a piece of chalk from a box in Nathan Phillips Square, placed there to enable people to write their personal messages on the pavement and the walls – a recent tradition in Toronto. “Please stay in Etobicoke,” he writes. “They love you, we don’t.”

Meanwhile, Edwards believes Ford’s time is not yet up. City Council is planning to call on him to take a leave of absence. “I think he will go into rehab and then come back,” he predicts. “He’s going to win the next election.”

One Response to Two Torontos clash over Ford