A century after Titanic, small icebergs are most treacherous

Ever since the sinking of the Titanic, the International Ice Patrol has been mapping icebergs for ships crossing the North Atlantic. Despite modern technologies such as satellites and radar, tracking dangerous ice in the shipping lanes is still a human task. The smaller chunks are especially treacherous.

Lieutenant Commander Jacob Cass of the U.S. Coast Guard appears from the cockpit of a Hercules military plane with a message. “Ahead and to the left,” he shouts over the deafening noise of the aircraft in flight off the coast of Newfoundland. “Iceberg!”

On the left side of the patrol plane – airmen don’t use ‘portside’ – looms a glowing white mass floating in the North Atlantic off Canada’s East Coast. The majestic colossus has a slightly slanted, triangular top. Small lakes have formed on its surface, bathing in sunlight. On one side, there is a sizeable gully with seawater. Waves splash against the gleaming ice. 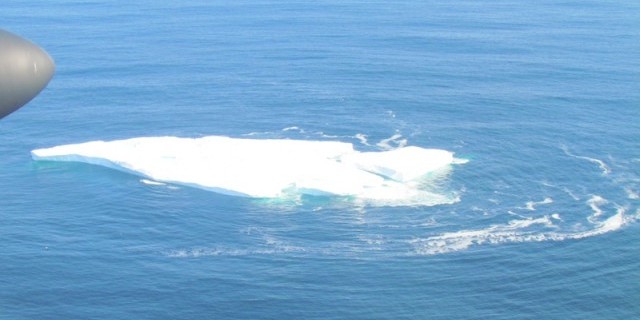 Iceberg in the North Atlantic Ocean from the plane of the International Ice Patrol.

“It’s a large, tabular iceberg,” says senior ice observer Will Moran after a turn around the berg: between 120 and 200 meters in length at water level. The position of the iceberg is more or less in line with expectations given where it was last seen. It was projected to be in this area by the ice patrol’s ‘drift and deterioration model, a computer model that takes currents and melting rate into account, Moran explains. “It’s on plot.”

With data gathering like this, the International Ice Patrol (IIP) maps icebergs large and small for ships in the busy shipping lanes between Europe and North America. The aim of the IIP is to protect ships from collisions with the rock solid obstacles and prevent a recurrence of a disaster like the one with HMS Titanic, exactly 100 years ago this weekend.

“Warnings are the best approach to fight the iceberg danger”

The disaster, caused by the most infamous iceberg in history, led directly to the creation of the International Ice Patrol. Since 1913, the organization, founded at the initiative of a group of maritime nations, has been keeping a watchful eye on the northwestern part of the Atlantic. The patrol area is known as ‘Iceberg Alley’ because of the danger of passing bergs – chunks of ice that have broken off of the glaciers of Greenland and northern Canada and are floating southward past the Newfoundland coast onto the open ocean.

Initially, that surveillance work was done by naval ships; in recent decades the task is performed with planes by the U.S. Coast Guard. Despite the emergence of modern technologies such as radar and satellites, it carries out patrol flights to this day. That’s because detection of icebergs on the high seas remains, to some extent, people’s work. Satellite images are consulted, but it can be difficult to tell the difference between icebergs and ships. Moreover, clouds are often in the way.

The IIP flies out regularly from St. John’s, Newfoundland, every iceberg season – roughly from February to August – in order to comb the ocean for icebergs. The emphasis is on the area south of the 48th parallel as icebergs crossing that line pose the greatest danger to ships.

Hercules plane of the U.S. Coast Guard used by the International Ice Patrol for flights from St. John’s.

“We have found that warnings are the best approach to fight the iceberg danger,” says Lisa Mack, commander of the IIP. Experiments in the last century to destroy icebergs with bombs or explosives have all failed. “We use a combination of reconnaissance and modeling to create an iceberg limit, and provide that to mariners. That’s been the most effective, and I think will continue to be for a number of years.”

Working with the Canadian Ice Service (CIS), the IIP sets the so-called ‘Limits of all known ice’ (LAKI) every day. Ships are advised to navigate around that line if possible, although it is not mandatory. “If weather conditions are good, they may choose to go through the limit; if conditions are poor they may choose to go around,” says Mack. “The information available helps masters make better decisions, and I think that lowers the risk.”

The approach works: since the sinking of Titanic, no trans-Atlantic ship that steered clear of LAKI has ever collided with an iceberg. Within LAKI, collisions do occasionally happen. In 2010, a ship incurred considerable bow damage when it collided with a chunk of ice. No one was hurt. The continuing threat of icebergs was also illustrated in 2007 by the accident with the cruise ship M/S Explorer, which sank off the coast of Antarctica. All passengers were rescued.

“Because of Titanic, we have much more maritime safety regulation”

Unlike a century ago, the main iceberg danger today is posed by small bergs and chunks, rather than towering hulks of the type that sank the Titanic. That’s because the smaller ones, known as ‘growlers’ and ‘bergy bits’, are more insidious as they can escape detection by ships’ radars. Especially in rough seas, small icebergs are often hard to distinguish from [white water waves]. But because the vast majority of their mass is below the surface, they can still do serious damage, says Mack. “That’s what we worry about the most.”

This weekend, members of the International Ice Patrol commemorated the Titanic disaster. Commander Mack flew over the wreck site and dropped a wreath. Flowers and rose petals descended onto the location of the disaster in which more than 1,500 people perished: 41 degrees north, 50 degrees west longitude, about 400 kilometers south of Newfoundland.

The ceremony over the Titanic site “really brings home the importance of the mission, especially when you see tankers and container ships chugging through the Atlantic,” says Mack. “Because of the Titanic, we have much more maritime safety regulation. So we think that the maritime industry is much safer than it was at that time. It was a tragedy that it took that loss of life to trigger those changes. But it wasn’t in vain; there’s good that came out of it.” 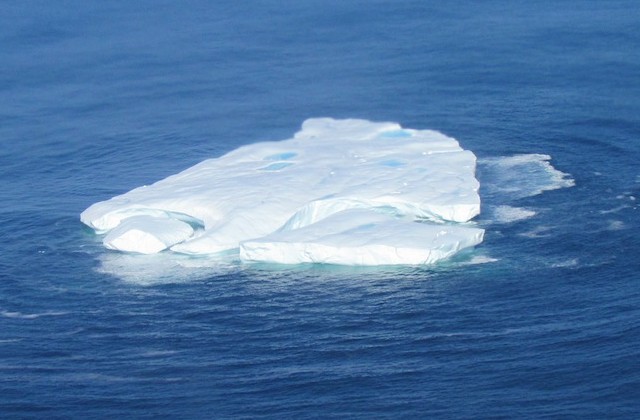 Iceberg off Newfoundland, seen from the International Ice Patrol plane.

Chunks of ice from glaciers in Greenland

Icebergs in the North Atlantic Ocean are generally chunks of ice that have broken off from the glaciers of western Greenland. Each year, about 20,000 to 40,000 bergs ‘calve’ off the glaciers in all shapes and sizes. It takes the blocks of solidly frozen freshwater two to three years to drift southward, along Newfoundland onto the busy shipping lanes. Only a fraction of all icebergs makes it beyond the 48th parallel.

After some busy iceberg seasons with hundreds of icebergs south of ‘48’, including a peak of more than 1,200 icebergs in 2009, not a single iceberg has passed that latitude in the past two years. More than 100 have been spotted so far this season.

Those ups and downs are caused by a series of factors, including currents, winds, and temperatures in the northern regions where the iceberg formed, explains Luc Desjardins, iceberg expert at the Canadian Ice Service in Ottawa. He does not want to attribute any of it to climate change. “There has been tremendous fluctuation in the number of icebergs that travel south of the 48th parallel,” he says. “We can’t really come up with any kind of trend.”

Desjardins is tracking the remains of a gigantic ‘ice island’ that broke off from Greenland’s Petermann glacier in the summer of 2010. Some large pieces of it have run aground in northern waters, while smaller chunks have drifted further south. Possibly, parts of the ice island will appear as icebergs below the 48th parallel in the coming years.