In Texas and other U.S. states, opposition is growing against a proposed pipeline to transport heavy crude oil from the Canadian tar sands to refineries along the coast of the Gulf of Mexico. Proponents of the Keystone XL project see economic growth, critics fear an oil spill and warn of pollution.

By Frank Kuin in Winnsboro, Texas

Wooden markers have been placed on the forested land of David Daniel in Winnsboro, a Texas town about 150 kilometers east of Dallas. All trees in a strip 36 meters (120 feet) wide will be cut down against his will, Daniel says during a walk on his 8 hectare (20 acre) property. Everything between the posts, up to the tallest cedars, has to make way for the construction of an underground oil pipeline.

“The more you hear about this project, the more it doesn’t sound right,” says Daniel, a carpenter who has emerged as a leading campaigner against the oil industry. “The wall of the pipe will be less than a half inch thick. They want to send corrosive tar sands through, at high pressure and high heat. It’s a threat to our water supplies, and a pretty scary prospect.” 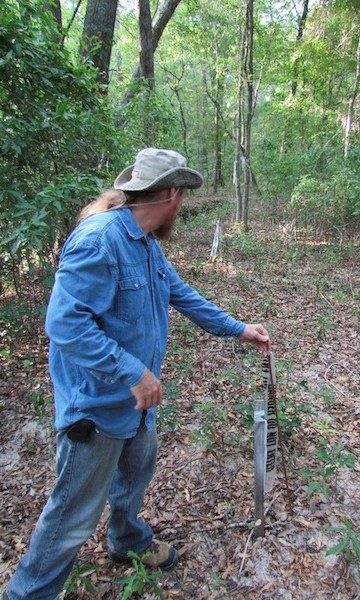 The markers indicate the route of Keystone XL, a planned mega pipeline to transport oil to the refineries on the Texas coast of the Gulf of Mexico, the largest refining centre in North America. The crude that is to flow under Daniel’s land will come from the tar sands in western Canada, by far the largest oil reserve on the continent. The link is to be constructed and managed by the TransCanada pipeline company.

The 2,700 kilometer pipeline crossing through six states has set off a fierce debate about the future of energy supply in the United States and the role of the controversial tar sands, one of the world’s largest reserves. The project is ready to go ahead as soon as President Barack Obama gives the final green light. A decision about the $7 billion investment is expected this year, following public consultations that have been held since 2008.

Many consider Obama’s choice on the project to be one between economic growth and energy security on one side, and environmental protection on the other. On the one hand, the project to double the existing U.S. import capacity of tar sands oil to 1.1 million barrels per day would create tens of thousands of jobs, according to proponents of the pipeline – a tempting prospect for Obama, whose approval ratings have been falling due to the ongoing economic crisis and high unemployment.

Moreover, proponents of the pipeline argue that increasing oil supply from Canada would reduce U.S. dependence on oil from the Middle East and other areas of geopolitical risk. Obama has designated Canada, which already accounts for over 20 per cent of American daily imports of 11 million barrels, as a stable and predictable energy source for the future.

But on the other hand, a presidential go-ahead for Keystone XL would imply ratification by Obama of growing exploitation of the tar sands. Environmental groups see this as a big step in the wrong direction. They point to the strenuous production process of oil from the tar sands as a major source of greenhouse gas emissions and pollution. Relying more on tar sands oil would fly in the face of Obama’s promise to focus on clean energy, they argue.

Indeed, opponents of the pipeline believe a veto by the president of the U.S., Canada’s main export market for oil, will put the brakes on overall tar sands development. “What the U.S. does about tar sands has a big influence in Canada,” says Susan Casey-Lefkowitz of the Natural Resource Defense Council in Washington, D.C. “We need to be asking broader questions, not just about the environmental impacts of the pipeline, but about what our energy future should look like in the U.S., and whether we want to be choosing a dirty energy future with a continued dependence on tar sands.”

“What the U.S. does about tar sands has a big influence in Canada”

For that reason, Keystone XL has become the focal point of a fierce campaign by opponents of the oil sands. This month, demonstrations are held in Washington calling on the Obama administration to reject the project. “If you want to impact the tar sands, you start right here by cutting off the transportation,” says Daniel, who has founded the group Stop Tarsands Oil Pipelines.

It’s a tough fight, because proponents of Keystone XL point to the advantages of the link with equal conviction. Heavy oil from the tar sands – known as ‘bitumen’, a material that is left after the viscous crude is chemically separated from sand and clay – is particularly suitable for the refineries on the Gulf of Mexico, which are built to handle heavy crudes from Mexico and Venezuela, two source countries that are in decline.

“The market down there is desperately looking for supply,” says Greg Stringham, vice president of the Canadian Association of Petroleum Producers (CAPP) in Calgary, the business centre for the oil sands. The refining industry in eastern Texas, with its capacity of 9 million barrels per day, faces falling deliveries, he says. “There is a void in the market for those refineries that are already built and have the capacity to handle heavier crude.” Linking the refining centre directly to the oil sands makes sense,” he says. “It really is a good marriage.”

Still, no one is pushing harder for the connection than Canada’s oil sands sector. Operators in the tar sands want better access to markets to keep up with anticipated strong growth in production. Current daily production of 1.6 million barrels per day is expected to rise to 3.7 million barrels by 2025. Large oil producers like Shell, ExxonMobil, BP and Total are investing billions of dollars in oil sands operations, mostly to offset declining production from conventional sources elsewhere.

Refinery near Port Arthur in Texas, along the coast of the Gulf of Mexico.

Besides refining capacity, the industry in Port Arthur on the Texas coast, a two-hour drive east of Houston, offers access to a deep sea port. The landlocked tar sands, located in the Canadian prairie province of Alberta, desperately need an outlet to world markets. Keystone XL would give the tar sands, now exploited primarily for the Canadian market and the U.S. Midwest, access to other parts of the world, including Europe and China.

Opponents see no need to make unlocking the oil sands a priority. “We should not be rushing into permitting a major tar sands oil pipeline that would more than double our dependence on tar sands oil,” says Casey-Lefkowitz, pointing out that greenhouse gas emissions from the production of oil from the tar sands are 87 per cent higher than those from drilling conventional oil. “If we burn these oil resources from the tar sands, we will never meet our climate goals. It’s an environmental nightmare.”

In addition to pollution from production, environmental risks are also posed by the transport of crude from the tar sands, say critics. Bitumen is more viscous than conventional crude; in order to send it through the pipeline it must be diluted to a compound called ‘diluted bitumen’, or ‘dilbit’. This mixture, which contains sand particles, will be squeezed through the pipe under greater pressure and at higher temperatures than conventional oil – with greater risk of a leak, say opponents.

Casey-Lefkowitz, who co-authored a critical report on dilbit, points to a leak in a pipeline in Michigan last year as an example of what could go wrong. As a result of that accident, 3 million barrels of bitumen was spilled into the Kalamazoo River. “They’re still cleaning it up,” she says. “Our U.S. pipeline system is not set up to deal with bitumen.”

Brenda Kenny of the Canadian Energy Pipeline Association, an organization of pipeline companies, denies that transport of dilbit is more dangerous. “There is absolutely no indication that pipelines transporting blended crude with bitumen have any sort of increased risk of safety issues or internal corrosion.” Thanks in part to modern technology to inspect pipelines from the inside, carrying crude by pipeline is “by far the most environmentally sound and safest way to move large quantities of oil,” she says.

But in Winnsboro, David Daniel and other landowners have little faith in the good intentions of TransCanada and the oil industry. Oil spills like those in Michigan and the BP spill in the Gulf of Mexico have sown deep doubts. People are especially worried about the damage a leak could do to the supply of drinking water. “Our drinking water is of greater national interest than this oil,” says Daniel.

Eleanor Fairchild, another landowner in the path of Keystone XL, had never heard of the tar sands – but knows now that the reserves in Canada are large enough to extract oil for the next 200 years. She questions the implications. “What about clean energy? We’ve been talking about clean energy since President Carter. I’ll be long gone before it ever comes to pass.” 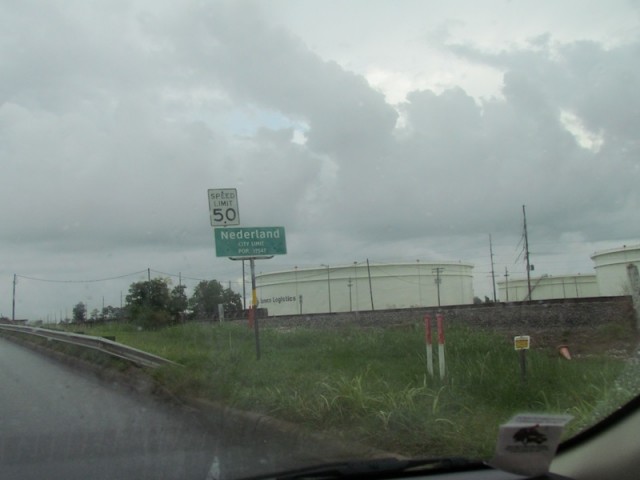 Megatanks in the town of Nederland, Texas, the end point of the proposed Keystone XL pipeline.

Still, Texas also has many proponents of the pipeline project. The town of Nederland, which neighbours the Port Arthur refining centre, is to be the terminus of the Keystone XL pipeline.

Nederland, Texas, is dominated by dozens of huge tanks, where crude oil is stored for delivery to big refineries of Valero, Shell, Total and others. The town was founded by Dutch immigrants in the late nineteenth century. It has 18,000 inhabitants and looks prosperous.

“Petroleum basically controls this area, it’s the bread and butter for many here,” says Dick Nugent, Nederland’s mayor. “The pipeline project is going to be a windfall to the city of Nederland. It will provide jobs, and the refineries will have a new source of crude. Supply of raw crude will help the nation. It is heavier crude with higher sulphur content, but it is something that’s usable, salable and that’s in demand, that’s the main thing.”

Nugent does not expect the Keystone project to be rejected. “No, it’s going to be a done deal, there is too much at stake,” he says. “They’ve been arguing about it for two years. The folks in Washington should get off their butts and approve this thing. Everything is in place to build it, it’s just a matter of the final ‘yes’.”

Purchasing 10 AK-47s will be a red flag Austin wants to re-establish Formula One in U.S.
Share