Unmanned spy planes are used by the United States to keep an eye on its border with Canada, as well as the border with Mexico. The aircraft are flown along the 49th parallel, looking for signs of illegal activity. At a base in North Dakota, Predators are piloted remotely.

Step through the door of a large, windowless trailer on a U.S. air force base in North Dakota and suddenly you stand in the cockpit of a spy plane in flight. Two men sit behind the controls of the unmanned aircraft, which sends back images of the landscape along the border between the United States and Canada: endless, snowy plains in shades of grey.

The pilots, assisted by a flight engineer, are controlling a so-called Predator, an unmanned aircraft that takes pictures of the largely unguarded border area between the two countries. The aircraft, equipped with radar and infrared cameras, can spot objects as small as about 10 centimeters from an altitude of 5,800 to 8,500 meters – human footprints, for example, crossing the border outside of the official ports of entry.

“The Predator is an aircraft that collects data,” says John Priddy, director of the National Air Security Operations Center (NASOC) at Grand Forks. He shows two aerial photos: one of a bare section of border landscape, and another of the same area a day later with a thin line – the tracks of a border crosser. “We try to quantify where crossings are occurring,” says Priddy. “This tells us where border patrol agents are needed, which helps us use resources in a more intelligent manner.” 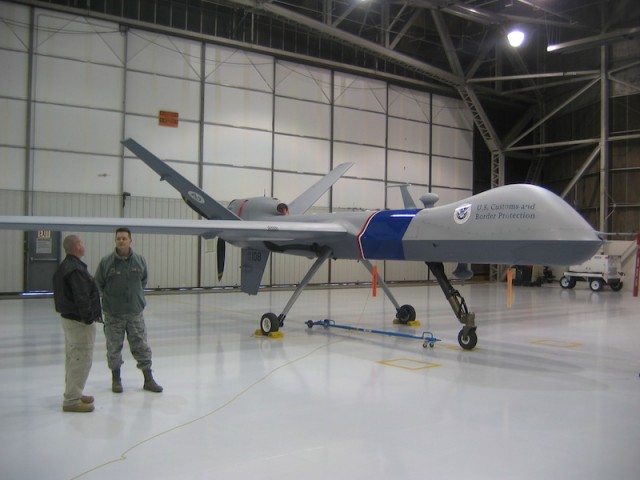 A ‘Predator’, an unmanned spy plane, in a hangar on a base in North Dakota.

Predators are now used to watch the U.S.-Canada border from the Great Lakes to almost the West Coast, a band of about 950 nautical miles (about 1.800 kilometers) wide, along the 49th parallel. The planes fly back and forth, looking for indications of possible terrorists, illegal immigrants and drug traffickers from Canada – a country which, in the eyes of some Americans, has a lenient asylum and immigration policy and doesn’t crack down enough hard on marijuana grow-ups. Radars are also looking for low-flying planes of smugglers.

Traditionally, the U.S.-Canada border is known as ‘the world’s longest undefended border’, but times have changed. Since the terrorist attacks of September 11, 2001, some Americans consider the open border with their neighbours to the north the weakest link in homeland security. Frequently, there are calls for closer monitoring, as on the border with Mexico. “While the emphasis is on the southern border, we realize that people could decide to come through the northern border,” says Priddy.

It is impossible, however, to physically guard all 6,400 kilometers of the U.S.-Canada border, over mountains, through forests, across icy lakes and fields – not to mention the border between Canada and Alaska, another 2,500 kilometers. Last month, the Government Accountability Office in Washington reported that only 51 kilometers of the Canadian border has an “acceptable level of security”. According to its report, the U.S. “does not have the ability to detect illegal activities on the vast majority of the northern border.”

“People could decide to come through the northern border”

That position is indicative of the different perspectives on both sides of the U.S.-Canada border. Attitudes have diverged since 9/11, with the U.S. emphasizing security, and Canada advocating openness and access. The two countries, which signed a free trade agreement in 1988, maintain the world’s largest bilateral trade relationship: $1.6 billion in goods and services crosses the border every day. While this is significant to the U.S., to Canada it’s of vital importance.

The problem for Canada is that since 9/11, it has found itself on the outside of the United States’ security zone, says Colin Robertson of the Canadian Defense and Foreign Affairs Institute in Ottawa. Both countries have worked together on continental air defense for decades; during the Cold War, they jointly operated an early warning system in the Arctic. “But since September 11, the border has retrenched from the North Pole to the 49th parallel,” says Robertson. “A lot of the technologies that the U.S. has experimented with in Iraq, like advanced radar and drones, they now employ on the northern border.”

In Robertson’s view, this has to do with American perceptions: compared with the Mexican border, where a wall has been built, the Canadian border is shockingly open. “If you start from the premise that you want to have a fence, then it is true that there is little protection along the northern border,” he says. “But when you consider the question whether a fence is needed against the threat coming from Canada, you have to conclude that illegal activity at the northern border pales in comparison to a real threat.”

Wayne Arseny agrees with that assessment. He is the mayor of Emerson, Manitoba, a Canadian border town north of Grand Forks. The access road to the village separates the province of Manitoba from snowy farm land in North Dakota. The border is unmarked. For years, Arseny worked at the Canadian customs post, a few minutes away. “I won’t say there isn’t any illegal activity, but it’s quite minimal,” he says. “It is possible to cross the border in unguarded areas, it is just not very practical. In winter, your feet freeze. And farmers notice if you walk across their land.” 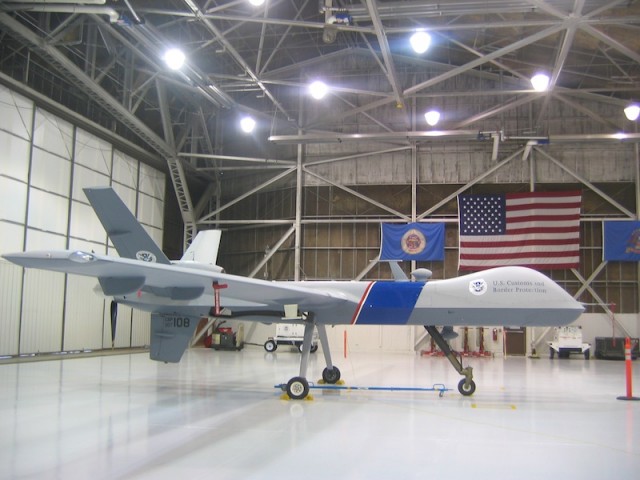 Predator in a hangar in North Dakota.

At the air base, Priddy acknowledges that people who cross the border illegally are rarely caught in the act. “The number one question is always: how many people did you catch with the Predator? But it’s not really that way. There is no rush migration from Canada, and the threat level is different here than on the southern border. I don’t want Canadians to think that we’re flying Predators along the northern border because we’re afraid of Canadians, or to spy on Canadians.”

Even so, the flight area of the Predators is being expanded, possibly also to the east. According to Priddy, the Predator is the best tool to quantify the situation on the border. “Just like you lock your front door at night, because you don’t want someone coming in that you don’t know,” he says. “Post-9/11, people in the U.S. want to know who is coming in. I don’t think that’s unreasonable.”