A human cockfight in an octagonal cage

Mixed Martial Arts (MMA) is on the rise in many parts of the world. In North America, the sport has eclipsed boxing as the most popular extreme fighting sport. The often bloody competition is worth billions of dollars. Critics reject the phenomenon as human cockfighting. Report on fight night.

The noise is deafening as Georges Saint-Pierre enters the arena in his hometown, Montreal to defend his title as the long-standing champion in mixed martial arts. More than 23,000 fans of the welterweight fighter chant his initials: GSP! GSP! Their idol, shaved bald and surrounded by an entourage of tough-looking guards makes his way to the fighting cage in the centre of the arena.

“Ladies and gentlemen, it’s time for the main event of the evening,” proclaims the emcee over loud heavy metal music as 29-year-old Saint-Pierre undresses, keeping only shorts, gloves and a mouth guard on. Then he steps onto the ‘octagon’, a cage with eight sides surrounded by a barrier almost two meters high. The floor has been cleaned of blood stains from some of the previous 10 fights of the night. He shakes his arms and legs to loosen up.

Across from Saint-Pierre, his challenger is jumping up and down. Josh Koscheck, a 33-year-old wrestler from California, is famous for being Saint-Pierre’s opponent in the reality TV show The Ultimate Fighter. His bravado has drawn much publicity in the run-up to the fight. With conviction, he plays the role of villain to Saint-Pierre’s golden boy, promising to “put him to sleep” and making statements like: “I plan on pissing off over 23,000 people by knocking GSP out.” The crowd boos him loudly. 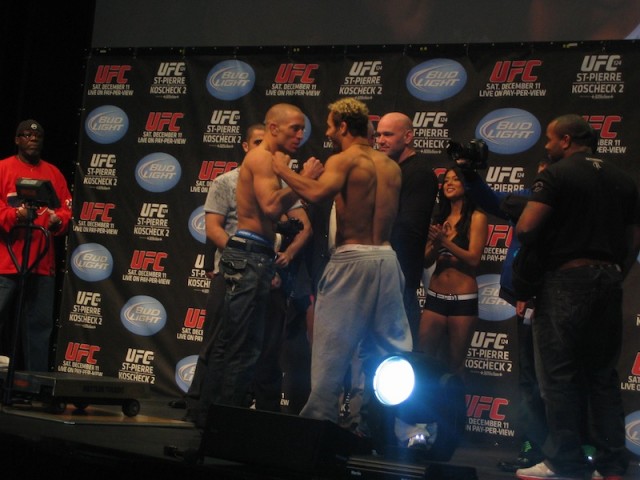 Georges Saint-Pierre and Josh Koscheck ahead of their fight in Montreal.

When the starting signal sounds, the two modern gladiators can go at each other for five periods of five minutes each using whatever techniques they want: boxing, kickboxing, wrestling, judo and other martial arts like taekwondo and jujitsu. All techniques of kicking, punching, headlocks and self-defense can be used to defeat the opponent. An intense kickboxing exchange suddenly shifts when Saint-Pierre charges his rival and throws him to the ground. Koscheck tries to punch his way out. The crowd goes wild.

Because of its versatility, mixed martial arts or MMA is on the rise in many parts of the world. In North America, many say the sport has eclipsed boxing as the most popular form of martial arts. “Many people are getting tired of boxing,” says Joe Ferraro, host of a TV show on mixed martial arts on the Canadian sports network Sportsnet. “I can only watch two guys for so long who are only using punches. Let’s see a kick, let’s see you try and keep me from taking you down. That to me is real fighting.”

Fans agree – and they are willing to pay up for the spectacle. “It’s great to watch, it’s fast and tough,” says Jason Wagner, a spectator in his twenties who has paid $600 for his ticket. “The fighters are true athletes, the training they need to do and their physical condition are incredible.” TV audiences can watch fight nights for a steep fee, through pay-per-view.

Cash is rolling in at the main organizer of fights, U.S.-based Ultimate Fighting Championship (UFC), a private company in Las Vegas with about 230 fighters under contract. Since the 1990s, UFC has become an empire worth hundreds of millions of dollars that organizes events in North America and beyond. Dana White, the UFC’s co-owner, wants to make mixed martial arts “the biggest sport in the world”.

Not everyone likes that idea. Opponents of MMA find the phenomenon “barbaric”. U.S. Senator John McCain campaigned in the 1990s against the legalization of the sport, which he has described as “human cockfighting”. Since then, fights have been subjected to more rules: head butts and blows between the legs are banned, as well as biting, pulling hair, and so-called ‘fish hooking’. But in some U.S. states, including New York, MMA remains prohibited. 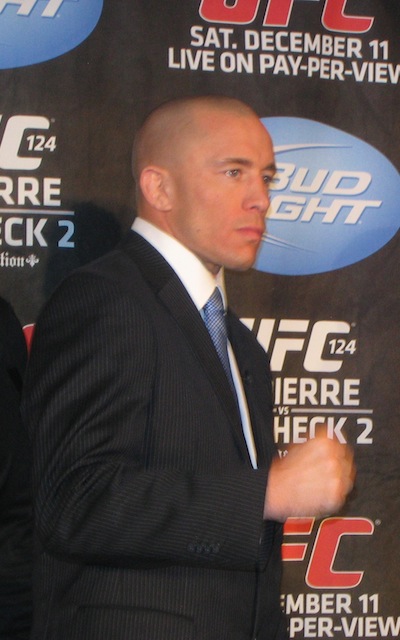 George Saint-Pierre, known to his fans simply as GSP.

Still, the UFC is gaining popularity with a wider audience, thanks in large part to Saint-Pierre, a superstar of the sport who is relentless in the cage, but has a very clean reputation outside of it. He is polite and soft-spoken, and projects an image of an intelligent achiever who works very hard to reach his goals. “Many people think that mixed martial arts is practiced by barbarians, but GSP proves the opposite,” says Alex Stine, manager of a fitness centre in Montreal where Saint-Pierre trains. “Georges is a role model for sports fans in Quebec and beyond.”

The star fighter, who began as a judoka, is known for his all-round fighting abilities, his top shape, and his smooth transitions between upright fighting and wrestling on the ground. He quickly leaves Koscheck with a black eye, keeps the upper hand in five rounds of lightning-fast manoeuvres and scores the victory – the 21st of his UFC career. He has only been defeated twice. Still, it wasn’t his best win, he says in post-fights comments. “I wanted to knock him out, and I didn’t reach that goal.”

Because of Saint-Pierre’s fame in other parts of the world where MMA is popular, such as Asia and South America, the UFC’s White has called Saint-Pierre “the most famous athlete to ever come out of Canada.” That has invoked comparisons with legendary ice hockey star Wayne Gretzky. GSP thinks it’s too much credit. “Gretzky was my idol when I was growing up,” he says. “I believe Wayne Gretzky has done more for hockey than I have done for mixed martial arts. My goal is to reach that point one day in my life.”

With files from Daan Heijink