Canada has been a popular destination for Mexicans fleeing their country’s bloody drugs war. But now, the Canadian government has imposed a new visa requirement to stop the influx. “Harper has said, we don’t want any more Mexicans.”

Surrounded by a group of Spanish-speaking children in a suburb of Toronto, Pedro Ochoa holds up a baseball between his index finger, middle finger and thumb. “This is how you hold the ball,” says the 50-year-old baseball coach in a field between some dreary residential high-rise buildings. “And you throw it from your shoulder,” he explains in Spanish to the boys of immigrant families.

Ochoa, a Mexican who has fled drug violence in his native country, has found a role as a baseball trainer for underprivileged Latino boys in Toronto, his Canadian refuge. Two years ago, the former pro baseball player fled the city of Veracruz, after he received threats from drug traffickers. His life was in danger following an argument with dealers at the baseball field where he used to practice, he says. He was beaten up and was threatened with a gun to his head. He escaped to Canada, “the only country where I could go without a visa.”

Ochoa is part of a wave of Mexicans who have fled to Canada because of the bloody drugs war in Mexico. Last year almost 10,000 Mexicans sought political asylum in Canada, a country that was relatively accessible to them because they could go there without a visa – unlike the United States. All migrants who set foot on Canadian soil are entitled to an asylum procedure. The number of asylum requests by Mexicans in Canada has tripled since 2005; Mexico has become the largest source of refugee claimants in the country. 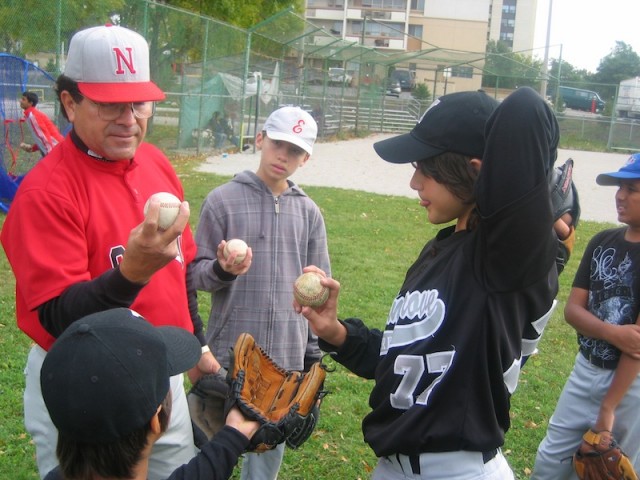 Until recently, that is. Now, the Canadian government has put an end to the influx by imposing a visa requirement for Mexicans. According to Prime Minister Stephen Harper, the measure was needed because Canada’s refugee system is too open. Due to the automatic right to a lengthy procedure, the system enables ‘bogus refugees’ to jump the queue of the regular Canadian immigration stream, Harper believes. “We have many legitimate refugee claimants … but we are spending an enormous amount of money on bogus refugee claims in a system that encourages those claims. And this can’t continue this way.”

Coach Ochoa is facing deportation. Twice, he failed to convince Canadian immigration judges that he is eligible for political asylum. He is awaiting a final appeal. “I want to obey the law, but I don’t want to go back to Mexico,” he says firmly. “The situation in Mexico is very difficult; drug cartels have more power than the government. I fear that the dealers will carry out their threats.”

Mexico, a partner of Canada in the North American Free Trade Agreement (NAFTA), finds the visa requirement as “humiliating”, Mexican Senator Rosario Green Macías said last month in Toronto. In order to come to Canada, she had to provide proof of home ownership, her last six bank statements, a letter from her employer, and personal information about family members, she said indignantly. “That has to stop,” said Green Macías, a former foreign minister. She likened the Canadian measure to the wall that the Americans are building on their southern border to keep illegal immigrants out.

“I want to obey the law, but I don’t want to go back to Mexico”

Still, the visa measure has had the desired result: the number of asylum applications by Mexicans in Canada has plummeted from 7,000 in the first eight months of this year, to dozens since that time, says Richard Goldman of the Committee to Aid Refugees in Montreal. He is strongly opposed to the tactic. “It is improper to impose a visa requirement to cut off a flow of people, many of whom need protection,” he says.

According to Goldman, the visa measure ignores the real danger confronted by asylum seekers from Mexico. The country is plagued by a bloody battle between drug cartels and the army. Since the end of 2006, over 14,000 people have been killed. “Many people who come here from Mexico are fleeing situations of danger and threat to their lives,” says Goldman. “The visa requirement is going to deny many of these people protection in Canada – or anywhere else, because there’s no other place they can go.”

However, refugees from Mexico have a low rate of acceptance in Canada: only 11 per cent receive asylum. This has to do with two important criteria: probability of protection by authorities in the country of origin, and the ability to seek refuge in their own country (‘internal flight alternative’). Although some observers doubt the ability of Mexico to protect its citizens against drug violence, Canadian immigration judges generally rule that Mexicans have domestic protection or flight options.

“Mexico is in a state of war”

Ochoa’s asylum request was denied for that reason – and there are other poignant examples. This month, a refugee tribunal rejected an application for asylum from Gustavo Gutiérrez Masareno, a policeman from Ciudad Juárez in Mexico with a reputation as a champion of human rights. Gutierrez fled with his family to Canada last year because he received death threats after he criticized alleged human rights violations by the army. Gunmen appeared at his house, and he received text messages like “you’re next”.

Police protection turned out to be an illusion in Juárez, one of the most violent cities in Mexico on the border with Texas. Gutierrez had to go into hiding because the state of Chihuahua could not guarantee his safety. Therefore, the assumptions of the judges are incorrect, argues Mordechai Wasserman, lawyer for Gutierrez. According to him, they don’t see the seriousness of the situation in Mexico.

Enrique Rivera, a Mexican refugee in Montreal, agrees. “Mexico is in a state of war,” he says. Rivera, a political activist from San Luís Potosí, has been living in Canada since 2007. He fled Mexico after he received threats. He considered Canada a country with respect for human rights, but finds that it is now much more difficult to find a safe haven there. “Because Harper has said, we do not want any more Mexicans.”