The historic library of Stanstead and Derby Line stands on the Canada-U.S. border: the entrance is in the United States, the books are in Canada. In border communities like these twin towns along the Quebec-Vermont boundary, the tightening of customs controls is viewed with dismay.

By Frank Kuin in Stanstead, Quebec

A thick white line is painted across the road to mark the division between the town of Stanstead in Canada’s province of Quebec, and Derby Line in the U.S. state of Vermont. On one side of the line, it says ‘U.S.A.’, on the other, ‘Canada’. You can just walk across – but strictly speaking, you’re not allowed.

Just like some other towns along the border of thousands of kilometers between the United States and Canada, Stanstead and Derby line are attached to each other. One street, appropriately named Canusa Street, is exactly on the border, with homes on one side in Canada and homes on the other side in the U.S. 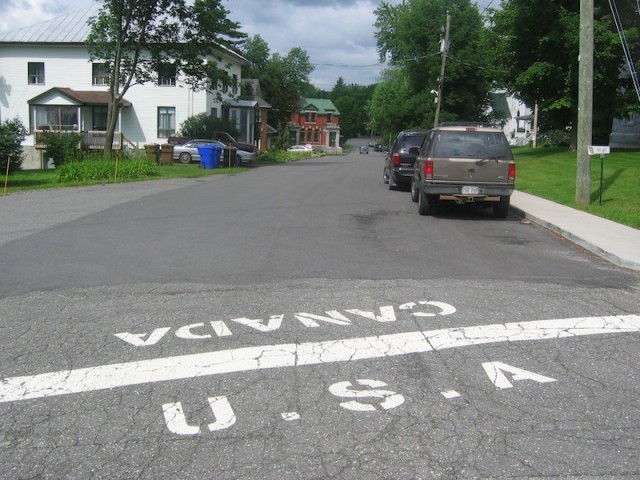 Border line between Canada and the United States, looking towards Stanstead, Quebec.

Some streets, like Lee Street, run from one country into the other. But you’re not allowed to drive through anymore. The white line marks the boundary, and there are signs to warn people that they have to report to customs if they want to cross. On the U.S. side, patrol cars pass by regularly.

In border communities like these, the tightening of customs controls at the border between the two nations since September 11, 2001, is viewed with dismay. Checks at the boundary between the U.S. and Canada, traditionally known as the ‘longest undefended border in the world’, have become considerably stricter since the terrorist attacks, affecting the daily lives of residents of border communities in profound ways.

“We used to have lots of Americans who came over, but we don’t see as many as before,” says Raymond Yates, mayor of Stanstead. “A lot of people don’t want to be hassled, answering lots of questions.”

Yates points out that the two villages have a history of collaborating and sharing, in areas ranging from their common water supply and a sewage system to a fire department and an ice hockey league. “We have a history of centuries of mutual help and understanding,” he says. “But many things have changed, and it has hurt in some ways our relations with our neighbours.”

There is talk of putting up a fence to close the streets, Yates says with a shrug. The only thing he can do is strive to ensure that it will not be too ugly, he says.

Michel Cloutier, a waiter at a restaurant on the Canadian side of the line, is less diplomatic about the more rigid controls. “It’s stupid,” he says. The U.S. customs officials “do everything strictly by the book. They search everybody, even elderly people. People don’t cross the border anymore because they don’t want to bother. I’ve been working here for four years, and business goes down year by year.” Statistics confirm that border traffic has decreased in recent months. 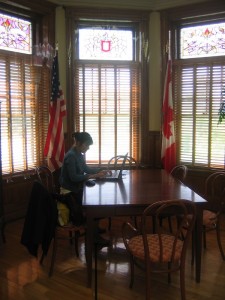 U.S. and Canadian flags mark the border inside the library of Stanstead / Derby Line.

An old library of Stanstead and Derby Line stands on the boundary. The front door of the heritage building is in the U.S., the books are in Canada. In the reading room, a line runs across the floor with flags on either side – a symbol of the friendly relations between the two countries.

Visitors from Stanstead are still allowed to walk to the front door to pick up their books, says librarian Kathy Prue, a Canadian by birth who lives in Vermont. But if they want to cross the street, they have to report to customs first.

“Since September 11, security has tightened quite a bit,” she says. “Crossing the border is much more stringent now. Some people don’t cross the border as readily as they used to because of the tightened requirements.”

The library building, which also has an opera house upstairs, was purposely built on the border, says Prue. “When this building was built early last century, the border was kind of non-existent. Now we have become separate communities in separate countries.”

One Response to A thick stripe separates Stanstead from Derby Line