Expo 67: Canada at its coolest

The world exhibition Expo 67 in Montreal marked the centenary of Canada and is regarded as an exuberant birthday party. The country was visited by the world and came of age as a multicultural nation. For the 40th anniversary of the watershed event, join a cool trip back to Montreal in the swinging Sixties.

Rino and Giselle Castonguay have come all the way from Canada’s East Coast for a trip back in time. The couple from the Atlantic province of New Brunswick visibly enjoys a packed tour through Parc Jean-Drapeau in Montreal, once the site of arguably the coolest event in Canadian history, and one of the most memorable World Fairs of the 20th century: Expo 67.

With the sounds of swinging French pop, the Beatles, Petula Clark and bossa nova coming from speakers, the “balade”, a small train on pneumatic tires,  meanders through the extensive park and recreation area built on two connected islands in the St. Lawrence River across from downtown Montreal. “To your left, you see the U.S. pavilion,” says hostess Odette, dressed in a light blue, ultra stylish 1960s outfit, just like several hundred young hostesses at Expo wore at the time. 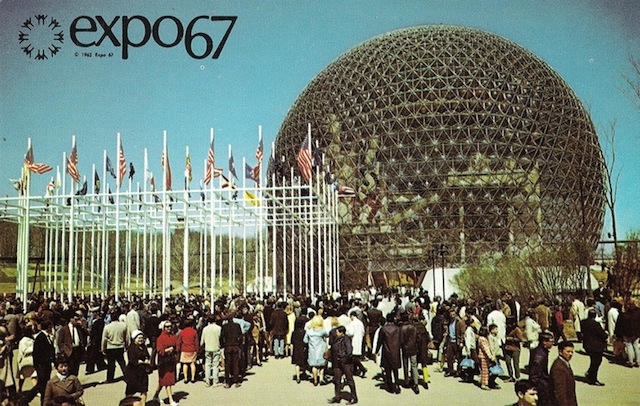 Exactly 40 years ago this summer, Rino and Giselle came here for the first time to explore the world. They were almost 20 then and it was their first trip outside of rural New Brunswick to the big city, he says. “A world opened up to us,” he recalls enthusiastically. “We saw people here from many different countries, heard their music, discovered their cultures, learned how people lived outside of Canada. It made us realize that the world is big, but we all share things in common.”

You could say that all of Canada went through a similar experience. Expo 67 marked the centenary of the country and is widely regarded as an unexpectedly exuberant birthday bash when Canada was visited by the world and came of age as a modern, multicultural nation. More than 60 countries built pavilions on Île-Sainte-Hélène and Île Notre-Dame, two man-made islands created with the soil and rock dug up during excavation for the construction of a subway system in the burgeoning city. 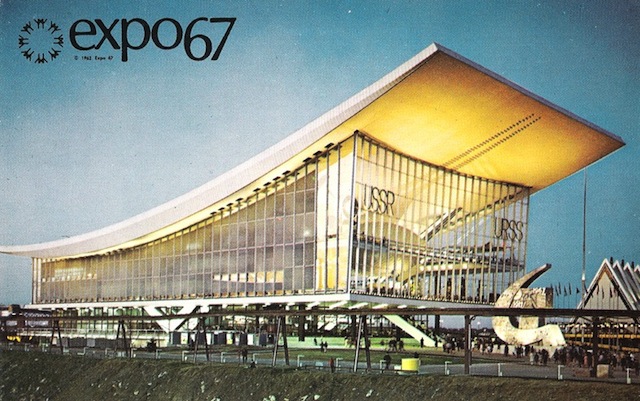 Critics thought it was crazy, a grotesque waste of money in modest Canada. But it worked, as can be seen during a tour of the park and an exhibition to mark the 40th anniversary of Expo. Inspired by the swinging Sixties, perhaps, or prompted by Cold War rivalries, participating countries built pavilions with one even cooler and more impressive than the next.

The Soviet Union erected a huge and dazzling pavilion that served as an exhibition space for Soviet technology. Not to be outdone, the U.S. pavilion was a giant geodesic dome 60 meters at its tallest point, designed by architect Richard Buckminster Fuller. Inside, an exhibit was devoted to space flight featuring an Apollo capsule.

Canada built a large inverted pyramid, Germany set up a giant, multiform tent. The Dutch pavilion looked like an enormous Meccano set, while Czechoslovakia attracted millions of visitors with a multimedia presentation in technicolor on moving panels.

Visitors could go to India, Korea, Morocco, Iran and Venezuela, and discover music, dance, art and technology from each country. At each pavilion, they could get their Expo passports stamped. The entire exhibition, themed Terre des Hommes, or Man and His World, was connected with an irresistible monorail. 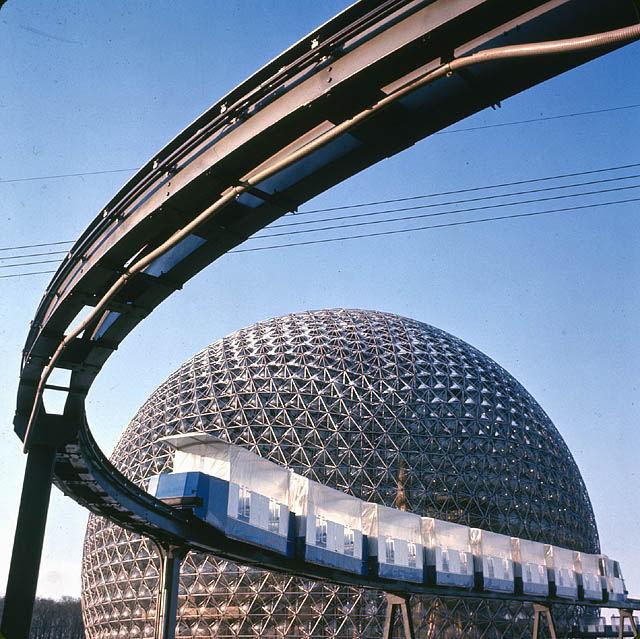 American pavilion and monorail during Expo 67 in Montreal.

“Canada had a party and invited the rest of the world,” historian Michael Adams told the CBC about Expo 67. “We opened ourselves up to other tastes, other cultures, and an eclecticism that has come to define Canada in the last 30 years. The Canada we are in today is very much the expression of the values that Expo represented – Canada as the microcosm of the world.”

The physical legacy of Expo 67 is the island park, still a popular destination for city dwellers and tourists, with sports facilities, botanical gardens, and an amusement park. Some pavilions remain, most notably the American sphere. Thematically somewhat reminiscent of the Atomium in Brussels, the landmark is now a biodiversity museum. Most of the other pavilions have been removed – that of the Soviet Union was demolished stone by stone and rebuilt in Russia. 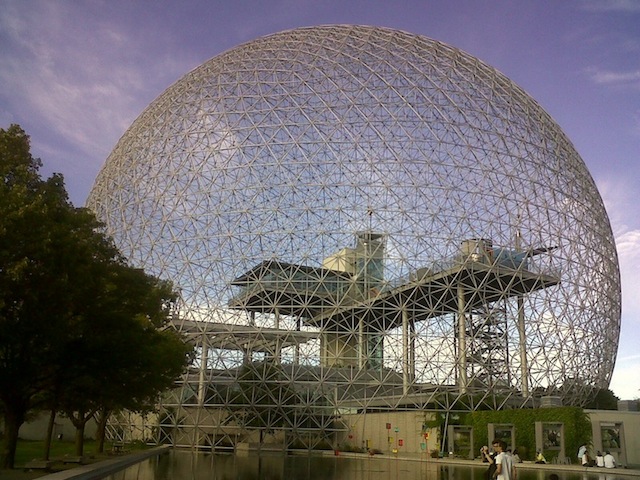 The former U.S. pavilion, now the ‘Biosphere’ in Montreal.

The “balade” drives by the spot where the USSR pavilion once stood, on what is now the Formula One racetrack that has since been built on Île Notre-Dame. Today, the circuit has been partially reserved for a rollerblading competition. Near the former French pavilion, remodelled as a casino, people are playing beach volleyball.  In the centre of the park, a Creole festival is in progress. In culinary terms, Expo left its mark on the city, says Odette, as “some chefs who came to Expo to work at the pavilion of their country, stayed here afterwards and started their own restaurants.”

The island park is named after Jean Drapeau, the mayor of Montreal who brought Expo to the city. Inspired by the success of the world fair, he also managed to bring the Olympic Summer Games to Montreal in 1976 – but those were not nearly as successful, leaving the city with a debt of billions of dollars that took 30 years to be fully paid down.

Rino and Giselle Castonguay are pleased with the current state of the Expo park – and their trip back in time. “We are reminded of the time our eyes were opened,” he says. “It’s wonderful to still have it here, a little paradise inside the city.” 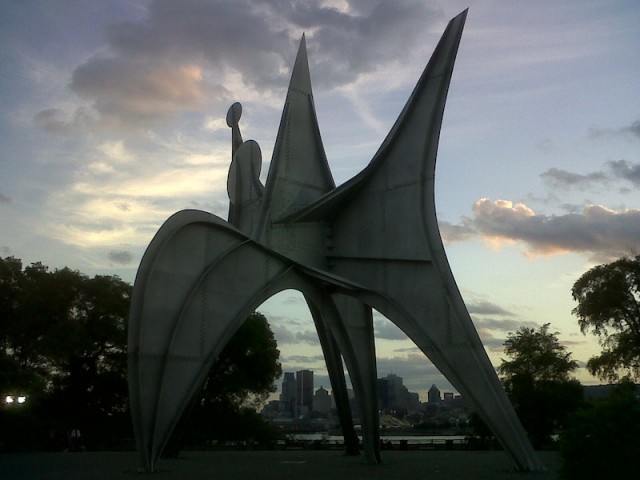 Sculpture ‘Man’, by artist Alexander Calder, with a view of Montreal.