Dutch immigrants to Canada have traditionally been known as hard workers who are keen to integrate into mainstream society. Even so, ties with the Netherlands remain strong for many. “We are well integrated here, but if I look at myself, I have also remained a Dutchman.”

It’s been 42 years since Gauke and Ineke de Jonge immigrated to Canada from the Netherlands. In 1965, they settled in Montreal. Their two sons were born in Canada, as well as their grandchildren, who speak English as their first language. The couple has ‘Canadianized’ and will never return to Holland permanently, he says. “Our family is here, as well as our friends and acquaintances.”

Still, the De Jonge Family has strong ties with the Netherlands. On the stoop in front of their house they keep a pair of wooden shoes. Inside, embroidered images of Dutch church towers adorn the walls. Out in the back, De Jonge’s barbecue has a large cooking plate for ‘poffertjes’, little Dutch pancakes. Coffee is served in mugs with traditional Dutch school images.

Moreover, the couple stays well informed about what’s happening in the Netherlands. In the past, they read magazines and newspapers, or heard the news from their contacts back home. These days, it’s even easier, with the Internet and satellite TV. Effortlessly, he names prominent Dutch politicians, from Balkenende to Marijnissen to Wilders. “And then you had that woman at Immigration, the former prison director,” he says.

De Jonge would likely perform well in ‘Stop the Time’, a new quiz show at BVN, the public television station for Dutch speakers abroad. In it, Dutch migrants who have been away from the Netherlands for at least 25 years are quizzed on Dutch events of the past decades. They are also asked for their assessments of modern Dutch society. 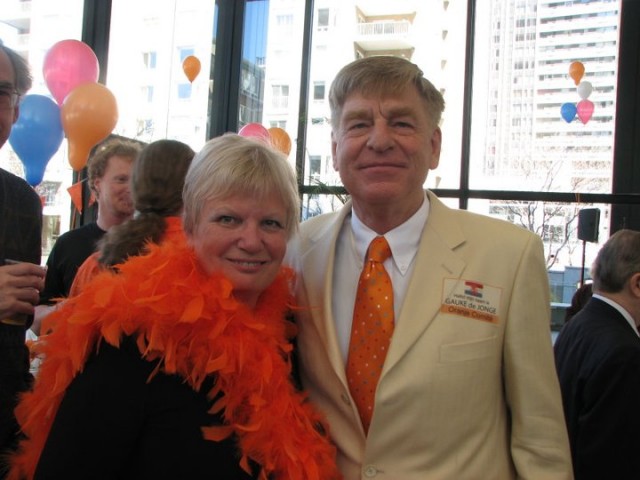 Ineke and Gauke de Jonge during a reception for the Dutch community in Montreal to celebrate Queen’s Day.

“I am extremely interested in the Netherlands,” says De Jonge, who still visits regularly. His image of the country has gradually evolved during the past 42 years. “I think the Netherlands is a rich, prosperous country where people do very well. People are not hypocritical, they dare to tackle problems.”

Ineke de Jonge: “I am amazed each time how every square meter of land is put to good use, and how amazingly beautiful it can be.”

But they also have some criticism. “People can be aggressive,” she says. “The way people talk to each other is deteriorating, I sometimes have difficulty with that.”

Gauke de Jonge: “The Dutch are very anxious about immigration. Issues around immigration are dealt with in a more pleasant way here in Canada.”

Canada has been one of the main destinations for Dutch immigrants since the Second World War. According to statistics from Radio Netherlands Worldwide, there are 358,000 Dutch people in Canada, of a total population of 32 million. That’s more than any other country (Australia is second with 230,000). Dutch immigrants to Canada have traditionally been known as hard workers who are keen to integrate into mainstream society.

“The Netherlands has changed beyond recognition”

Elaine Herfst is an example. In 1957, when she was 17, she immigrated to western Canada with her parents and siblings. She now lives in Chilliwack, British Columbia. She prefers to speak English. Although she describes her immigration experience as initially “traumatic”, she would never want to return permanently to the Netherlands.

“The Netherlands has changed beyond recognition,” she says about a visit to her native country a few years ago – the first time she went back. “I have grown away from it, because we have been in Canada for 50 years. I don’t have much Dutch left in me,  although I received my education in Holland. I don’t deny my background.”

Still, even Herfst keeps up with what is happening in the Netherlands. She follows the royal family closely and is impressed with the ‘Delta Works’, the public engineering projects to protect the country against floods. Asked for the name of the current Prime Minister – whose name, Balkenende, translates roughly into ‘beam ends’ – she has to think for a moment. “Something with wood, or boards.”

But Canada is her country, says Herfst. “My daughter is completely Canadian, and my grandchildren don’t speak a word of Dutch.”

Gauke de Jonge feels strong ties with both Canada and the Netherlands. “We are well integrated here, but if I look at myself, I have also remained a Dutchman,” he says.

De Jonge, who lost his Dutch citizenship years ago when he became a Canadian citizen, has followed the recent debate on dual citizenship in the Netherlands. He finds the policy too restrictive. “They cannot take away what’s in your heart.”

One Response to Dutch Canadians maintain ties with the Netherlands