Correspondent Frank Kuin > Immigration and multiculturalism > In Hérouxville, women are not stoned or burned alive

In Hérouxville, women are not stoned or burned alive

A controversial code of conduct for immigrants in the rural village of Hérouxville has fueled a debate in Quebec. To which extent should society conform to the religious practices of newcomers?

By Frank Kuin in Hérouxville

Using a big shovel, Lucien Corbin is clearing snow in front of his house on Rue Saint-Pierre in Hérouxville, a quiet village in rural Quebec, the predominantly French-speaking province of Canada. He takes a break to answer a question from a passing stranger: what does he think of the code of conduct that the village council has drawn up for immigrants who settle here?

“It is very good,” says Corbin. “We are at home here, and it is not up to us to adapt to others who come here. I have no problem with newcomers, but when immigrants come here, they should adapt to us. Not the other way around. That is our position.”

Corbin articulates the broad support among the 1,338 inhabitants of Hérouxville for a remarkable proclamation that the village council has issued: a five-page document that describes how the people of Hérouxville – almost exclusively white francophones – live. The purpose of the code, the first of its kind in Canada, is “to communicate clearly all necessary information” to newcomers, so that “they can integrate more easily into our community and social life.” 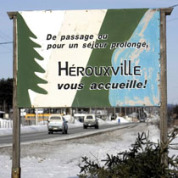 For instance, immigrants should know that men and women are equal. “A woman can drive a car, vote, sign cheques, dance, decide for herself, freely express her opinion”. Women are not “stoned or burned alive” in Hérouxville. Face coverings are acceptable only at Halloween. It is prohibited to bring weapons to school. In summer, boys and girls swim together in the co-ed swimming pool. At the end of the year, a fir tree is adorned; it is called a ‘Christmas tree’.

And that is the way it will remain, is the bottom line. The way of life immigrants have left behind in their country of origin cannot be recreated in their new homeland, according to the introduction to the list of commandments, an initiative by council member André Drouin, and available on the village website. Corbin agrees: “You must live according to the rules of the country where you are.”

The controversial code of conduct, rejected by many in Canada as xenophobic, has quickly become a flashpoint in a simmering debate in Quebec about the integration of immigrants. Key concept is the term ‘accommodement raisonable’ (reasonable accommodation): to what extent should secular Quebec accommodate the customs and wishes of religious minorities, such as requests for prayer rooms and special facilities and arrangements in public places such as schools, hospitals and swimming pools?

The debate was prompted last year by a Supreme Court of Canada ruling which stipulated that a young Sikh student could not be prohibited from taking a kirpan, a ceremonial dagger, to school in Montreal – despite a ban on the possession of weapons in schools. The high court ruled that the kirpan, a religious object of significance to many Sikhs, had to be sheathed and sewn into clothing. That compromise was deemed a ‘reasonable accommodation’ to the student’s religious practice.

Many in Quebec, a society that was strictly Catholic until the 1960s but has since drastically secularized, felt uneasy about the ruling. Other cases of alleged preferential treatment of religious minorities began to be publicized. A gymnastics club for women had matted its windows so as to not offend orthodox Jews in a synagogue across the street with views of their sweaty bodies. Teachers of Islamic faith are given extra days off to meet their religious obligations. Clinics accommodate the desire of Muslim women not to be treated by male doctors. And so on.

The debate in Quebec, which like France believes strongly in a secular state, may be a harbinger of a similar debate in English-speaking Canada, with its official policy of multiculturalism. The province of Ontario has already dealt with a controversy over the use of Shari’a (Islamic law, sometimes associated with the stoning of adulterous women) to settle family disputes (it was banned in 2005). Every year, debates about Christmas trees in public places pop up across North America, with some arguing it would be more inclusive towards non-Christians to speak of ‘holiday trees’ and ‘holidays’.

Church in the heart of Hérouxville, Québec.

None of these are pressing issues in Hérouxville. Stoning of women is not getting out of hand in the village. Nor is there an influx of foreigners to the town of a few intersections, a few hours’ drive northeast of Montreal. Although the Canadian government encourages newcomers to settle in smaller towns, only a handful of immigrants have come to Hérouxville, says Corbin: a family from France, and someone from Mauritius. “Very nice man.”

The commandments of Hérouxville are therefore more a response to the situation in Canada’s major cities, such as Montreal, where accommodement raisonnable of religious habits is, according to critics, running amok and eroding liberal achievements. Councillor Drouin has said on TV that Quebec, a province with a strong sense of identity, is in a “state of emergency” when it comes to protecting its culture. According to him, it is time to address the accommodations made to religious minorities.

But according to Jean Charest, Premier of Quebec, that debate has “gone too far” with the Hérouxville proclamation. He has sharply denounced the code of conduct, which has been copied by a few other villages in the region. “There are always people who have opinions that not all Quebeckers agree with,” he said. “We are perfectly capable in Quebec to integrate people from outside. That is our history.”

“Things are slipping on a number of our common values”

Other politicians have shown a willingness to tap into the sentiment expressed in Hérouxville. Mario Dumont, leader of the centre-right Action démocratique du Québec, the third party in the province, thinks that the accommodations represent “a direction the population of Quebec clearly does not want to go.” According to Dumont, “we’ve had a number of successes in terms of immigrant integration in Quebec, [..] but to anybody who looks at the way things are evolving in the last year or so, it’s obvious that things are slipping on a number of our common values.”

Elections will be held in Quebec this spring.

In Hérouxville, there is little doubt about the proclamation. “I’m surprised people are making such a big deal of it,” says Julie Bérubé, a passer-by on the main street of the village. She is dressed in a parka, her face almost completely covered with a hat and a scarf against the cold. Only her eyes and nose are visible. “I believe in respect for other people,” she says. “But when they come here, they should respect our habits. We have our own way of life.”

“We drink alcoholic beverages and dance”

Some passages from the municipal declaration of Hérouxville, Quebec: